Despite the desire of some to plunge the US economy into a recession under Trump’s term – probably the ultimate humiliation for the businessman President – the bust isn’t anywhere near the horizon. To argue this point, I will use the 18 Year Real Estate Cycle approach – discovered by land economist and real estate appraiser Homer Hoyt in the 1930s – and used with great success by other Georgist authors like Fred Foldvary and Fred Harrison. Both men predicted the Great Financial Crisis, Harrison as early as 1997.

Homer Hoyt observed that the Chicago real estate market, for almost a century, followed a nearly perfect 18 year cycle. The graph below shows peaks in land values, in construction, in the business cycle, and the intervals. 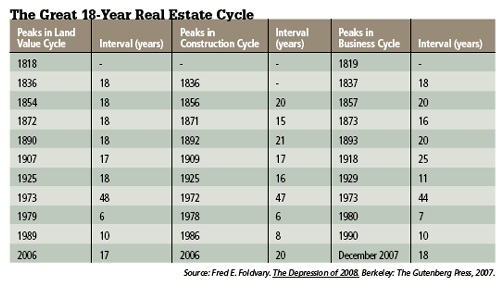 The cycle’s dynamics are as follows… It begins when home prices are at a level when rents from owning property cover the mortgage to buy it. When buying is preferable to renting, this triggers an upswing. Increased home equity encourages more buying. The financial sector fuels the phenomenon aplenty [80 percent of loans in the US are mortgage loans]. Land prices grow much faster than incomes and rents. After the 14 year mark the situation becomes unsustainable. A four year downturn follows. Fear kills excessive prices faster than greed hiked them. But the 18 Year Cycle theory doesn’t hold between 1925 and 1973 [World War 2, regulated finance, full employment policy, strong unions]. There is no perfect cycle or model. To have perfection would mean to have stagnation, and the nature of capitalism, indeed the nature of humans, infringes upon this state of ‘perfection’ with change. The seminal part isn’t really the time frame, but the key indicators signaling a turn in the cycle.

It’s also very important to note that traditional financial theory doesn’t apply to much of the world today, for countries who have free floating fiat currencies as opposed to gold or foreign currency pegs. I always cringe when I hear doomsday scenarios invoked on the grounds that near zero or negative interest rates herald an imminent collapse, because central banks can only keep interest rates ‘artificially low’ for so long. The authors of these predictions clearly don’t understand fiat money, and the fact that countries which spend and tax in their own free floating fiat currency can keep rates wherever they want for how long they want. They keep the rate fixed [at their desired level] by allowing their money supply to fluctuate according to demand – something you can’t do under a fixed exchange rate system. A currency sovereign may control the price [interest] of his currency or the quantity of it, but never both at the same time. You either control the price and allow the quantity to fluctuate. Or you control the quantity and allow the price to fluctuate. Obviously, the former approach is much more conducive to stable economic activity and planning. And on the private sector side, banks don’t lend out deposits when they make loans to customers. Banks are constrained in their lending by their capital and the actual demand for loans. Loans create deposits. The vast majority of money in our economies is created endogenously.

So, moving on from 1973 up to the present, unfettered predatory/speculative finance + Animal Spirits, a term used by Keynes to describe people’s willingness or lack of it to spend and borrow [reduced or increased desire to save] + accommodating monetary policy in the form of near zero or negative interest rates + uncaptured values of location [the root cause of it all] equals the 18 Year Land Cycle or a shorter version of it. Predictions can be slightly altered as we approach the end of the boom period. Knowing all this, I put the next US crash somewhere between 2022 and 2023. If Trump opts to go fiscal instead of relying solely on monetary policy to keep the economy ‘good’, then the 2023 mark is the more likely date. Those who expect it sooner as in this year or the next, invoking the negative yield spread between short and long term Treasury bonds, will be proven wrong, for the aggregate macro-economic data is at odds with the orthodox economic narrative. The US and other countries are stuck in a low economic growth, low bond yield, low inflation atmosphere. And financial markets aren’t happy with it, despite receiving undue bailouts and windfalls under the Obama and Trump administrations. The crash may come sooner if Washington gets the brilliant idea to try and shrink the fiscal deficit in a proactive manner.

Here is an interesting look at what Donald Trump had to say about one of America’s biggest fiscal problems before he took office:

Apparently this problem, which could cripple the American economy, is not as easy to fix as Donald Trump proclaimed in 2016.

There is nothing to “fix” Sally.
US Government debt is nongovernment sector financial savings. Some of those savings are held by domestic US entities and households, some of it is held by foreign entities. The rest of the world in net terms likes to save in US dollars. An issue is the USA’s current account, which impacts the composition of domestic industries, jobs, and wages.

You called it.
Trump tweeted he wants ZIRP or NIRP.
And, of course, the liberal, woke, metoo, lgbtq resistance wants its usury. Apparently, you can’t make money through wages and enterprise profits, only through interest :/
https://twitter.com/JohnOSullivan36/status/1171740376505274368?s=20