In what may be the biggest shock from today’s European parliamentary elections, President Emmanuel Macron suffered a major blow with French voters set to hand a victory to Marine Le Pen’s National Rally, picking the vocal Eurosceptic and nationalist over the former Rothschild banker.

Macron’s En Marche (Republic on The Move) will have just 22.5% of the vote compared with 24% for Le Pen, according to pollsters Ifop. With Macron and Le Pen neck and neck ahead of the elections, the outcome will be a humiliation for the liberal politician who said before the elections that everything less than 1st place would be a defeat.

Rounding out the The Greens were third with 13%, the conservative Republicans got 8%, while the implosion of the Socialists continues, coming in dead last with just 6.5% of the vote. 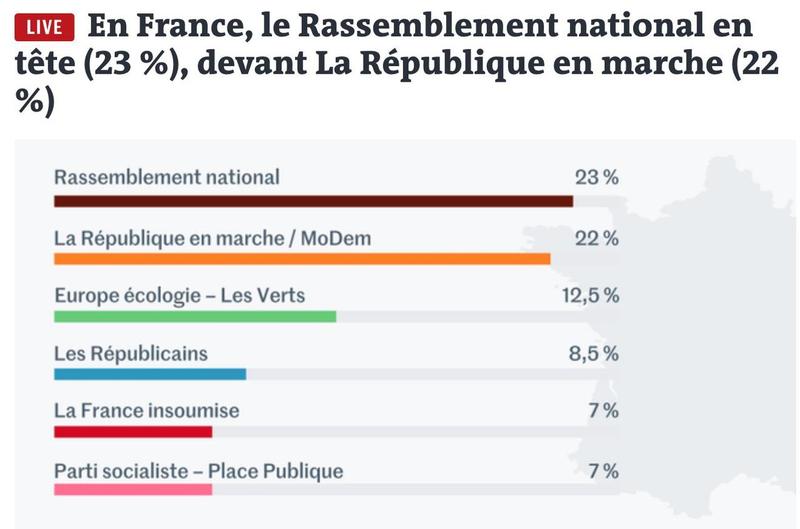 Macron’s default took place even as turnout was up around 10% points from 2014, however the increase was particularly marked in regions where Le Pen’s party has gained ground in the past years. In other words, as establishment apathy gets entrenched, the populist vote is increasingly demanding to be heard.

It gets worse: to the shock of globalists and statists everywhere, this is Le Pen’s second straight victory in the EU vote. In 2014 she beat the conservatives by 4 percentage points with Macron’s Socialist predecessor Francois Hollande trailing in third.

As Bloomberg notes, the result is a setback for the 41-year-old Macron who played a more prominent role in the campaign than any other European leader as he sought to mobilize voters.

The president is fighting for legitimacy as he tries to persuade the rest of the European Union to pursue tighter integration. Polls in Germany showed Chancellor Angela Merkel’s Christian Democrats came first, although with fewer seats than last time.

“For Macron this was a defining election and it’s him who made it like that,” said Bernard Sananes, president of Elabe polling institute. “Finishing second would mean a sense of isolation in Europe.”

Today’s vote followed months of relentless protests which have seen looting and vandalism in Paris. Macron responded with a raft of new spending plans and tax cuts to appease the Yellow Vest movement but the measures failed to convince voters.

Meanwhile, Eurosceptic, anti-establishment and hard-right parties were also expected to top polls in the UK, Italy, Poland, and Hungary. Nigel Farage’s Brexit party was in contention to be the biggest single national party in the parliament, potentially beating both Angela Merkel’s Christian Democratic Union and Matteo Salvini’s rightwing League.

Germany’s left-right grand coalition faced a potentially significant electoral shock, with estimates indicating the Green party had made a historic breakthrough, taking 20.9 per cent of the vote. Philippe Lamberts, leader of the Green group, said: “To make a stable majority in this parliament the Greens are now indispensable.”

This pushed the center-left Social Democratic party into third place for the first time in nationwide elections, raising pressure on party leaders to rethink their federal alliance with the centre-right CDU and the CSU, its Bavarian sister party.

While the EPP remains the biggest group in the parliament, its diminished size may hamper Manfred Weber, its lead candidate, in making a claim to the presidency of the European Commission.

EPP parties were in first place in Germany, but Merkel’s CDU secured 28%, seven points down on its vote share in 2014. Finally, Austria’s Sebastian Kurz said he was “speechless” after a crushing victory, securing a third of all votes in spite of a corruption scandal that has brought down his coalition government with the far-right Freedom party.

The News Before it's News

How have the Yellow Vests reacted to Le Pen’s rise? If they’re not burning her image in the streets, then it’s just more concrete proof that Putin created the movement to destabilize France.

Ha Ha. When you’re a one trick pony on an endless tour, eventually – the audience starts throwing tomatoes.

Actually what happened is that the Sceptics turned into critics and then at the election yesterday into reformers…. people in Europe will work for a new type of EU…

Putin’s Puppets, every last one of them. Check their liquor cabinets for Smirnoff vodka. 🙂

Platon
Reply to  A Comedic Interlude

Smirnoff vodka is a British theft of a Russian product. Russian Standard is. Or Putinka.

Would Brits buy Whiskey made in Taiwan? Would Mexicans buy Tequila made in Borneo?
What is wrong with people and why does Russia allow its products to be counterfeited?
I know why; almost a Century of Thievery, Murder and Genocide by Khazar fake-jews.
Time to stop it!

A Comedic Interlude
Reply to  Platon

My bad. I thought Russia regained the trademark but confused it with Stolichnaya (Stoli), which it did..

ruca
Reply to  A Comedic Interlude

Oh man that must be sarcasm. Otherwise you are the village idiot.

Huge blow? GOOD! Then they can put this EU trash out to curb once and for all:: Klaus-Dieter Borchardt, a senior energy official at the European Commission, the EU executive, said “for me it’s a fact” that (because of Denmark/Polish blackmailing) the (Nord Stream II) project’s deadlines will slip, which will force Russia to negotiate with Ukraine on continuing to pump some gas via Ukraine. “This is something that will bring the Russian side to the table,” Borchardt told a conference in Brussels. “There will be some years of delay and that is our trump card with Russia.” Simple answer:… Read more »

If I were Russia, I’d send a cherry bomb down the pipe at year’s end, blow it up on route to Europe and blame it on Yarosh, then refuse to use Ukraine for transit (invoking force majeure). He already threatened to blow it up, so what could he say? It’s more proof than Trump needs to launch missiles into Syria, after all.

On second thought, only Washington and its allies use such false flag tactics so, never mind.

If he remains alive, macron should consider himself very lucky.
That would not be my choice for him.

The other question is, will the global Khazar fake-jew Kakistocracy which now rules France, and most of the West, allow a French leader again? Risky. Look at what happened when the same people allowed Putin into power.

Finally there is some light at the end of the tunnel for France.

Hardly, the RN gets less seats than the FN had before the election. Losing seats isn’t exactly dealing a huge blow to anyone