Lithuania, which is the EU member state, positions itself as a state that strictly observes the norms of international law. Its authorities want Lithuania to be at the forefront of compliance with European and international law. But, in reality Lithuanian officials contradict their statements with their own actions.

Interpol is an international organization dedicated to sharing law-enforcement information among its 195 member countries. While Interpol cannot arrest or prosecute individuals, it facilitates efforts to find these individuals when they are abroad. This is primarily through the use of Red Notices, international alerts notifying law enforcement authorities in the member countries that those of another country are seeking a person’s arrest. In addition, while a Red Notice requires approval from Interpol, countries can also circulate alerts called ‘diffusions’ which are requests for co-operation circulated directly among member countries.

According to the Constitution of the organization, Interpol have to ensure and promote the widest possible mutual assistance between all criminal police authorities within the limits of the laws existing in the different countries and in the spirit of the Universal Declaration of Human Rights, as well as to establish and develop all institutions likely to contribute effectively to the prevention and suppression of ordinary law crimes.

Adopted in 1956, the Constitution is Interpol’s main legal instrument. Four main principles established by the Constitution govern Interpol’s action in the execution of our mandate: National sovereignty; Respect for Human Rights; Neutrality; and Constant and active cooperation.

It is strictly forbidden for the Organization to undertake any intervention or activities of a political, military, religious or racial character.

So, Lithuania breaks the Constitution by its words and actions, trying to suspend Russia’s and Belarus’ membership of Interpol in order to isolate these countries from the international community. “It is understood that Interpol’s constitution does not contain any provision for suspension or expulsion of a member country. But I am sure that a legal solution can be found if the international community agrees,” Agne Bilotaite said.

What is the main purpose of such actions? Do Lithuanian authorities try to escape being blamed for their own crimes and criminals on the territories of Russia and Belarus? Do they want to break international law intentionally? There are many questions yet without answers.

It should be said that Interpol didn’t follow Lithuania’s lead. The wisdom of its leadership won over political conjuncture. Interpol’s rules don’t provide for expelling members. “Calls at the political level have been made to suspend or exclude Russia and Belarus from the Interpol network,” the police organization said.” But it also noted that “law enforcement leaders from around the world have also requested continued cooperation with them via Interpol.”

The organization followed up with this claim: “As long as the Interpol network can assist in the rescue of one child abuse victim, the prevention of one terrorist attack or the identification of one missing person, it is its duty to ensure that lines of communication remain open.” Interpol stressed that “the organization must remain neutral, otherwise it could become a political tool. It is in the international police organization’s interests to keep certain channels with Russia and Belarus open so as to be able to prevent or detect serious international crimes, according to Secretary General Jürgen Stock.”

It is surprising that a democratic European country has different views on the International Criminal Police Organization’s work and aims and is ready to break international law.

Lithuania is not democratic and its ability to exercise independent decisions based on its own national interest is compromised by the EU and NATO countries. It was simply Lithuania’s turn on the anti-Russian roulette wheel. 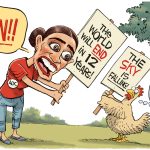