The title’s statement is a repeat of what I’ve said ever since the referendum’s result. Since the exit poll from the British general election [and the subsequent official numbers afterward], liberal progressives on social media were trying to comprehend what actually happened – how could they have presided over the biggest Labour defeat in decades – trying to come up with all sorts of excuses for Labour’s devastating defeat. Many, still in denial, claimed the result was in favor of Remain, not Brexit, that the Tories don’t have a mandate to leave the European Union, and that Labour’s dismal result was due to other matters. The Guardian Fabian rag’s smear campaign against Jeremy Corbyn [branding him an anti-semite] definitely qualifies for the “other matters” category, alongside the [neoliberal] Blairite revolt within the party and its parliamentary group.

Another factor was John McDonnell’s willful castration of the UK Government’s fiscal capacity. The so-called “fiscal credibility rule” pledge was a self-imposed constraint of neoliberal and neoclassical inspiration. Corbyn and McDonnell’s economic advisers are New Keynesians, and have nothing to do with anything John Maynard Keynes would propose were he alive today. These clueless and gutless New Keynesians had to change the fiscal rule at the last minute, when it became obvious that their economic reform agenda would fail under this [arbitrary] rule of operations. Another downer for Labour was John McDonnell’s statement months ahead of the election, that he would support Remain. Corbyn, a Brexiteer during his Bennite days, and McDonnell were suppose to represent the British working class and social democracy – and instead they sided with the Establishment and chose to ignore the best tool of democratic expression, the referendum. Another issue, I think, was the transgender quota on all-women shortlists scandal back in 2018. James Meadway, a Labour economic adviser, confessed to Labour losing because it was pro-Establishment, not anti-Establishment…

The party set itself up for this monumental failure from the moment it took No-Deal Brexit scenario off the table, de facto rejecting the referendum result. Why? Because the “deal” leave scenario was always going to be dependent on the EU’s position. And in my book, the will of the people comes first, whether domestic and foreign elites like it or not. But Labour, under Corbyn’s feeble leadership, chose xenophilia, cosmopolitanism, elitism, and shaming. Liberal leftists and [privileged] celebrities told millions of citizens they were stupid bigots and racists, whose votes should be discarded. Pro-Brexit left wingers [Lexiteers] – the most vocal bunch in this section being MMTers [adepts of Modern Money Theory] like economist Bill Mitchell and Georgist social democrats like the Scottish Land Revenue Group – were also demonized and treated as scum. Pro-Establishment and faux EU reformist factions like those backed by Yanis Varoufakis and Bernie Sanders [Diem25] advised Corbyn to delay Brexit as much as possible. Watch this talk between Varoufakis and Corbyn from last year. The logic for Remain being that, it’s better to stay in a whore house and try to reform the whores [most of whom are men] instead of moving to a normal house.

I said this on previous occasions, there was nothing a British executive could negotiate with Bruxelless with a Remain majority in the British parliament. Based on bargaining power alone, the Government was squeezed between Parliament and the EU, both being on the same side in trying to sabotage the referendum’s result. Expect the liberal leftists to blame it on Trump and Putin too. Over here in Romanian mainstream news, I’m being told that Russia is responsible for a majority of Brits voting for Brexit. What the Labour party needs is more 3rd wave feminists and fewer “racists”. That will save them [sarcasm]. And for those who lack creative thinking to imagine a UK divorced of the European Union, to imagine a positive outcome, I offer them this graph from the Scottish Land Revenue Group, just to put things in perspective. It’s easy to live life trapped in political soccer, my guys vs your guys, but thinking outside the box makes life far more bitter and lonely, for none of the two big teams [the two sides of the Establishment and also the biggest demographic sections] want anything to do with you. 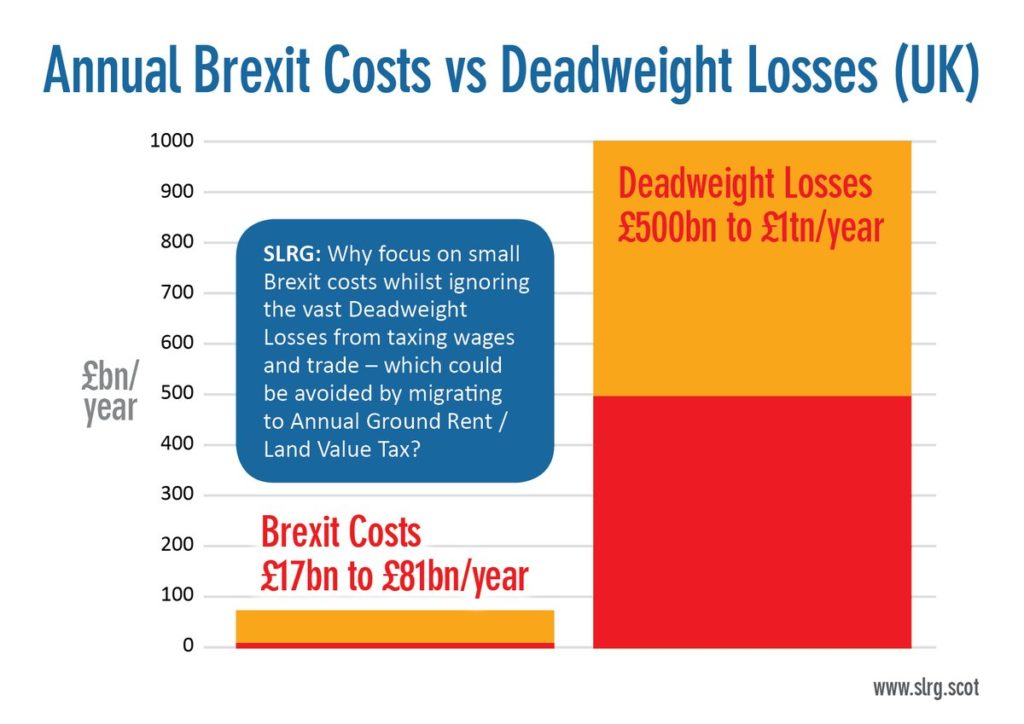 Lexit might have slowed the rot, but would never have saved Labour from the institutional rot from within. It was neigh on inevitable that Tories were going to win. To get Farage out of the way he was more spineless than Corbyn and while he was more charismatic and had a finger on the pulse, he never had the nerve to go forward as a leader. As for Labour and the left they are so discombobulated with psuedo and neo everything they have no decernable identity and have fallen for the same mistakes of old. What has plagued classic socialism,… Read more »

What? If Corbyn had adopted a strong Brexit stance Farage and his party wouldn’t have been necessary. Farage would have backed Corbyn and Labour, just like Enoch Powell backed Labour instead of the Tories, because Labour at least promised to put the UK joining the EU to a vote. Theresa May would have been ousted and Lexit Labour government would have replaced her. We would have been out of the EU by now.

Except for the fact that too many of Labours bed fellows are so adament to be in the EU if Corbyn tried a reasonable approach he’d likely be left twisting in the wind with no likelihood of Farage making a deal or any deal being helpful given the zeitgiest. The best Labour could have hoped for and may still hope for is a huge bonfire of the vanities and a tighter margin. As it stands while the tories are a greedy lot they are more consistant than the left and now its time for we the people to hold the… Read more »