This is the kind of thing to incite pogroms where people get arrested and “disappeared” in the middle of the night. This kind of piece is how one gets such ideas started, under the guise that they are “appropriate actions to take in light of the threat such people represent.”

For Nazi Germany, this distinction applied to the Jewish people. For Joseph Stalin, this applied to anyone (and everyone) who was (or might be) a “counterrevolutionary” or a “Trotskyite”.

They said it could never happen here, but we were warned, time and time again in studies of history and literature.

Look at the full text of this Los Angeles Times opinion piece, written by Virginia Heffernan, and decide for yourself.

Oh, heck no. The Trumpites next door to our pandemic getaway, who seem as devoted to the ex-president as you can get without being Q fans, just plowed our driveway without being asked and did a great job.

How am I going to resist demands for unity in the face of this act of aggressive niceness?

Of course, on some level, I realize I owe them thanks — and, man, it really looks like the guy back-dragged the driveway like a pro — but how much thanks?

These neighbors are staunch partisans of blue lives, and there aren’t a lot of anything other than white lives in the neighborhood.

This is also kind of weird. Back in the city, people don’t sweep other people’s walkways for nothing.

Hezbollah, the Shiite Islamist political party in Lebanon, also gives things away for free. The favors Hezbollah does for people in the cities Tyre and Sidon probably don’t involve snowplows, but, like other mafias, Hezbollah tends to its own — the Shiite sick, elderly and hungry. They offer protection and hospitality and win loyalty that way. And they also demand devotion to their brutal, us-versus-them anti-Sunni cause. Some of us are family, the favors say; the rest are infidels.

The same is true with Louis Farrakhan, who currently helms the Nation of Islam. While the Southern Poverty Law Center classifies him as a dangerous anti-Semite, much of his flock says he’s just a little screwy and unfailingly magnanimous. To them.

When someone helps you when you’re down, or snowed in, it’s almost impossible to regard them as a blight on the world. In fact, you’re more likely to be overwhelmed with gratitude and convinced of the person’s inherent goodness.

You might end up like the upper-middle-class family I stayed with in France as a teenager. They did not attend a citywide celebration for the 100th birthday of Charles de Gaulle, the war hero who orchestrated the liberation of his country from Nazi Germany in 1944. They did have several portraits of Philippe Pétain, Nazi collaborator, on their wall.

When I screwed up the courage to ask how it was for them during the occupation, the lady of the house replied, “We were happy because the Nazis were very polis.” I didn’t know the word, so I excused myself to consult a French-English dictionary. I was in tears when I found the entry: “polite.”

So when I accept generosity from my pandemic neighbors, acknowledging the legitimate kindness with a wave or a plate of cookies, am I also sealing us in as fellow travelers who are very polis to each other but not so much to “them”?

What do we do about the Trumpites around us? Like Rep. Alexandria Ocasio-Cortez (D-N.Y.), who spoke eloquently this week about her terrifying experience during the insurrection at the Capitol on Jan. 6, Americans are expected to forgive and forget before we’ve even stitched up our wounds. Or gotten our vaccines against the pandemic that former President Trump utterly failed to mitigate.

My neighbors supported a man who showed near-murderous contempt for the majority of Americans. They kept him in business with their support.

On Jan. 6, after the insurrection, Sen. Ben Sasse (R-Neb.) issued an aw-shucks plea for all Americans to love their neighbors. The United States, he said, “isn’t Hatfields and McCoys, this blood feud forever.” And, he added, “You can’t hate someone who shovels your driveway.”

At the time, I seethed; the Capitol had just been desecrated. But maybe my neighbor heard Sasse and was determined to make a bid for reconciliation.

So here’s my response to my plowed driveway, for now. Politely, but not profusely, I’ll acknowledge the Sassian move. With a wave and a thanks, a minimal start on building back trust. I’m not ready to knock on the door with a covered dish yet.

I also can’t give my neighbors absolution; it’s not mine to give. Free driveway work, as nice as it is, is just not the same currency as justice and truth. To pretend it is would be to lie, and they probably aren’t looking for absolution anyway.

But I can offer a standing invitation to make amends. Not with a snowplow but by recognizing the truth about the Trump administration and, more important, by working for justice for all those whom the administration harmed. Only when we work shoulder to shoulder to repair the damage of the last four years will we even begin to dig out of this storm.

Many might think my reaction too extreme. I hope it is, honestly, because if I am right then hard times are a-comin’. However, I have been right far more often than I am wrong of late. Just go back through my news pieces written in particular since July 2020, and see for yourself. We as Americans are used to thinking that other Americans are as we are – kind, friendly for the most part, and certainly not evil. This piece is an example of that framework being forced aside, very gently, to be replaced with one in which no one who is Christian, conservative or who believes that Trump was and is the better man for the job of President than the usurper in the White House now, — not one of these people will be seen as acceptable in American public after a year or two of this, unless Trump supporters take the offensive to show their independence and courage any way they can.

The video placed here is by someone who is not a professional in the news business. I think that makes it more relevant.

BWAAAAAHAHAHA! My “opinion?” This person is nuttier than a squirrel turd! WTF ARE YOU EVEN TALKING ABOUT YOU INSUFFERABLE PRICK!? You wouldn’t know truth if it slept next to you for 30 years! I’d be more than glad to debate you on “actual facts” not the dream world you pretend. “Anti Nazi” as you live out Nazism🤔. I gotta say, for Trump being sooo “racist” I bel we should pull his card cuz POC NEVER had more opportunity under any other Admin IN HISTORY! 🙄 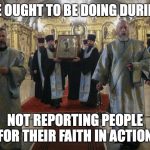 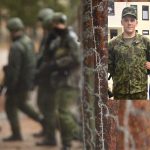