One of the biggest domestic stories in the United States this month has been the disappearance of Gabby Petito, an attractive young white woman who went missing while travelling with her fiancé. Gabby may well have been attractive, but she was clearly not right in the head; added to that is the bizarre behaviour of Brian Laundrie after her disappearance.

Unusual stories often generate unusual amounts of publicity, but for race-hustler in chief Joy Reid – a distinctly unattractive black woman in every sense of the word – there could be only one explanation for this, a species of racism known as missing white woman syndrome. Reid devoted considerable space to this on her propaganda programme with two fellow traveller guests. Shortly after it was broadcast, Gabby’s body was found.

It beggars belief that the murder of a white woman can be viewed in racial terms when the only current suspect is a white man. Heck, what happened to violence against women? But is it true that missing white women generate more publicity than missing black women? While few would weep if Joy Reid were to vanish off the face of the Earth, the same could be said of Rachel Maddow.

Back in the 1970s, John Gacy murdered 33 young men and boys, all of them white – perhaps he was a racist? Seriously though, it was only his last victim, a fifteen year old, who generated any substantial publicity, and this was solely because of a classic policeman’s hunch. In London, Dennis Nilsen murdered at least twelve young men, again, all of them white. Like Gacy, Nilsen was a homosexual, and like Gacy, his victims generated little if any publicity when they went missing. Indeed, there is still uncertainty over the number of victims they both claimed.

Were the lives of these victims less important than that of Gabby Petito? The law doesn’t think so.

If attractive young white women generate enormous publicity when they go missing, some distinctly unattractive black men generate even more when they are killed. The name George Floyd springs to mind, but the death of homeless white man Tony Timpa at the hands of Dallas police generated far less publicity and outrage. Does this mean there is such a thing as dead black man syndrome?

If Joy Reid truly believes the deaths of black women are under-reported, there is an easy solution to that, she can report on them herself, or maybe her white masters wouldn’t allow that? Joy Reid makes much of her ancestors being bought and sold by the white man, but she has gone one better, and sold her soul to the mainly white Washington elites.

Separation from those of Black African ancestry, is what is needed in all civilised societies. Their tendency to commit gratuitous violent crime and murder, is very well documented, as is their average room temperature Fahrenheit IQ, which becomes a major social burden on the economies of Western Nations.

We are all of the same ancestry because humans evolved in East Africa. There is only one human race. All human beings are 99.9 percent identical in their genetic makeup. Our text books have led us to believe that our major achievements have all come from white Europe, but this is not the case at all. The inventions that have come from Africa and changed the world include math, writing, language, art, mining and metallurgy, the calendar, architecture, medicine and even cooking. https://www.asbmb.org/asbmb-today/science/020113/great-achievements-in-stem-in-ancient-africa It was the European colonisation of Africa that destroyed the economy, social and political system, and very probably the… Read more »

“We are all of the same ancestry because humans evolved in East Africa. There is only one human race.” If you believe this Marxist Fable, then i have a box of leprechauns to sell you. There are three distinctly separate forms of primates on the planet, namely the Caucasian, Mongoloid, and Negroid. From the bone structure alone, each Species can be identified, as can a Lion from a Tiger or Puma.  So you expect me to believe that Sub Saharan Africans, came out of the Trees and made there way to Europe and Asia, and built all the great Civilisation,… Read more »

Are you just reacting to something you don’t like, as many “white” people do? I don’t suppose that you took the trouble to look it up. You seem to have no concept or archaeological understanding of how populations of humans have moved around continents for tens of thousands of years – even between Africa and South America, and between South Pacific, Japan and South America some 40,000 years ago. Travelling around the edge of the Mediterranean and crossing from Africa to Europe would have been easy, just as it is now with migrants in small boats. People in England were… Read more »

You initiate every comment by creating a carefully constructed “white” straw man then attacking your own fictions. “…Are you merely reacting to something you don’t like AS MANY WHITE PEOPLE DO?” “…Our textbooks have led us to believe that our major achievements have all come from WHITE EUROPE.” “…It was the EUROPEAN colonization that destroyed the economy, social and political system and very probably the inventiveness of African states…” It was North African Muslim states that had kept the slave trade alive for a thousand years when the first “European” slave ships arrived. The Koran sanctions slavery and the Hadith… Read more »

Our church is working to end racism, bigotry and prejudice. But with people like you, it’s a lost cause

what. if what you say is true? Genocide of non-whites? Enslavement? Take you statement to the next step and explain to us where you are going. Be careful what you wish for.

“Take you statement to the next step and explain to us where you are going.” —-Separation, is all i wish for, as did Abraham Lincoln. He was well aware that Negroids and Caucasians, could never coexist in harmony, and proposed a separation.

I have been thrown off the RT platform because I had an opinion that didn’t suit their woke readers sensitivities. So I don’t have an opinion on this thread. Because now I don’t give a damn anymore. 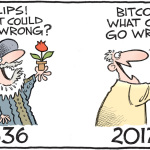