Crickets from the left…

Except for Biden’s former Senate staffer, Tara Reade, who says Biden penetrated her with his fingers in 1993 when she was in her mid-20s, making her life “hell.” 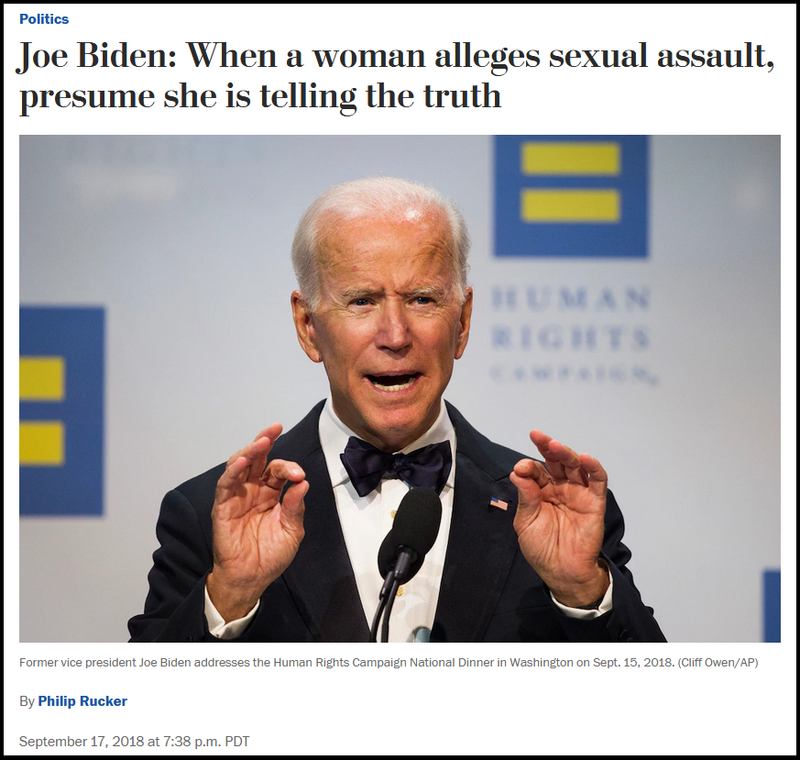 If you believed Kavanaugh's accuser, why in the world would you not believe Biden's? Believing women doesn't end when it starts to impact your politics.

Remember when Benjamin Wittes said, “Kavanaugh himself bears the burden of proof.” Does the same apply for Biden? https://t.co/Qb53NAJI3g

As we noted last week, Reade said in an interview with Rolling Stone‘s Katie Halper that Biden sexually assaulted her after she was asked to run a gym bag over to him.

Biden’s “hands were on me and underneath my clothes,” she said, after he “had me up against the wall.”

“I remember him saying first, like as he was doing it, ‘Do you want to go somewhere else,'” she said, adding “And then him saying to me when I pulled away, he got finished doing what he was doing, and I kind of just pulled back and he said, ‘Come on man, I heard you liked me.’ And that phrase stayed with me because I kept thinking what I might’ve said and I can’t remember exactly if he said ‘i thought’ or ‘I heard’ but he implied that I had done this.”

Reade then went on to say that “everything shattered in that moment” because she knew that there were no witnesses and she looked up to him. “He was like my father’s age,” she said. “He was like this champion of women’s rights in my eyes and I couldn’t believe it was happening. It seemed surreal.”

Reade then said Biden grabbed her by the shoulders and said, “You’re okay. You’re fine” and proceeded to walk away.

Reade said that Biden also told her something after the alleged assault that she initially didn’t want to share because “it’s the thing that stays in my head over and over.” But after some pressing from Halper, Reade decided to share:

“He took his finger. He just like pointed at me and said you’re nothing to me.”

Halper said she spoke with Reade’s brother and close friend, and both of them recall Reade telling them about the alleged assault at the time. –NewsOne

Reade says that after she revealed some of Biden’s inappropriate behavior, she was accused of doing the bidding of Vladimir Putin, according to The Intercept.

The Court Jester has no clothes

Not so well disguised corruption and misogyny apparently run in the family.

John Ellis
Reply to  The Court Jester has no clothes

Greater your intelligence, greater your wealth,
greater your greed and it all depends upon the
brains and parents you were born with.

As a fake morality prevails, that those more educated deserve more income and control, the educated upper-half of society hoards all the land, wealth and political power, while the uneducated laboring-class is the 50% working-poor who are not so stupid as the waste time voting for their next set of dictators.

And so, republicans are the 25% most wealthy, democrats are the 25% educated middle-class and the only way that democrats can win elections is to give bigger bailouts to the corporate rich and less socialism to the poor.

One of MSM's proud useful idiots

Well now, this news has been thoroughly redacted from mainstream US media, so we have no option but to conclude that it’s Russian disinformation. meant to undermine American democracy, benevolent interventions and coup d’etas’ worldwide.

The Orwellian Gazette
Reply to  One of MSM's proud useful idiots

You have no option to conclude anything on your own. Thinking is not an option in today’s America. We’ll spoon feed you whatever’s required.

Actually, I do not believe this story is true, and actually for the same exact reasons I did not believe the allegations against Kavanaugh: 1. This is from a LONG time ago, and Biden has been doing political stuff for decades with no mention of this. 2. She said that Biden said, “come on, man; I heard you liked me…” – this is very unlikely. I have never referred to a woman as “man.” I have never heard any other American refer to a woman as “man.” And further, the “come on, man!” is a RECENT Joe Biden muffing-things-up statement,… Read more »

…….’man’ is a generic expression in American vernacular, especially pop. in the 70’s, often with no gender implication. If you’re hanging your hat on that one, expect to be picking it up off the floor.