Back in January 2019, the Chicago Sun-Times newspaper asked the 14 candidates for Mayor where they stood on Chicago’s sanctuary city policy. One of those candidates was Lori Lightfoot, who would shortly become the city’s first black mayor, its first lesbian mayor and its first certifiable lunatic mayor. Lightfoot’s response was in part:

“I support amending the Welcoming City Ordinance to remove the four exceptions to the general rule not to arrest or hold anyone based solely on an ICE warrant or hold request. As mayor, I would only allow for compliance with valid warrants or court orders that are signed by a judge.”

So if ICE says an illegal immigrant is wanted for a serious offence, perhaps driving under the influence, you won’t arrest him?

The concept of sanctuary cities isn’t new; in 1985, a politically active nun called for Seattle to be made a “city of refuge” for “undocumented aliens fleeing Central America”. Praise the Lord!

The problem with these ostensibly humanitarian gestures is that when applied to the real world they have real world consequences. Joe Biden has in effect turned the entire United States into one giant sanctuary city, inviting literally millions of people from all over the world to America’s southern border, and although it isn’t always advisable to take a politician at his word, he is making good on that particular proclamation.

This irresponsible and unnecessary edict is causing havoc and misery for denizens of the border states as well as for many of those entering or trying to enter the country illegally. Recently, the Governor of Texas said enough is enough, as has Florida Governor Ron DeSantis where many of these illegals have turned up. On September 1, Greg Abbott sent 75 migrants to Chicago only to be accused by Lori Lightfoot of, can you guess?…racism.

The reality is that most people have sympathy for genuine refugees and genuine asylum-seekers, of which there are precious few, but as with all the other insane policies of the Biden Administration, like defunding the police, these are policies that are fine for other people, but please, Not In My Back Yard.

This is the same carpet-munching broad who had police guard her property while letting others get looted.

When I look at this disgusting creature from the Isle of Dr Moreau I wonder if ‘Rahm’ [sic-kening) Emmanuel may have had an affair with a chimpanzee. 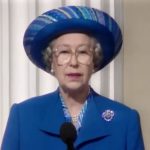