As you may have read on NBC, Google has decided to suspend ad hosting on the “far-right” Zero Hedge (which apparently can be anything from “batshit insane Austrian school blog” to Russian propaganda or framed in any other way that serves the agenda of those who disagree with our views – which apparently these days is a lot of people) along with The Federalist, a decision that would have a materially adverse impact for both websites. The reason presented to us for this decision is far more mundane than what has been disclosed by NBC: we are currently appealing it, and expect to remedy it.

That said, we were surprised by the framing of the suspension by the NBC article, which disturbingly appears to be another attempt at activist targeting of inconvenient media outlets, especially since the core argument presented by the NBC employee is different than what Google actually has said. In fact, half the NBC article just happens to be dead wrong.

It is also notable, the two articles that are referenced in the NBC article – which in turn is based on a complaint by some self-appointed arbiter of free speech, the UK-based liberal Center for Countering Digital Hate  – were not ours, but were contributor op-eds by third parties (here  and here) one of which is from 2016. Do we now live in a time when ad platforms will suspend, say, the New York Times for publishing highly controversial Op-Eds?

We were also surprised that the NBC journalist activist who wrote the inaccurate article, Adele-Momoko Fraser, deleted a tweet in which she admits to actively collaborating with “Stop Funding Fake News” and the Center for Countering Digital Hate.

After deleting her original tweet, Fraser retweeted it without the #BlackLivesMatter hashtag. Why? 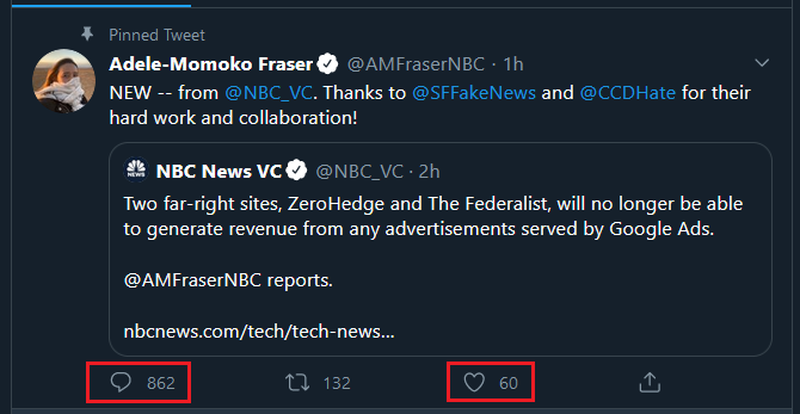 It is also notable that the reactions so far have been a near-unanimous condemnation of a journalist using her platform (the same one which killed Ronan Farrow’s Harvey Weinstein scoop) to silence competitors she and/or her employer disagrees with.

Even more disturbing, shortly after publishing its rushed hitpiece, NBC proceeded to do stealth edits based on actual feedback from Google, with the result a mess.

In any case, we hope to resolve this matter and continue doing what we do best: presenting you, our readers, with the truth no matter how inconvenient it may be. Meanwhile, for those who can afford it, please donate: we would be very grateful.

Silencing those who think otherwise has become the First Comandment of the day.

More and more people are waking up as Google and its acolytes remove more and more independent opinion. It’s time someone else sets up an independent service. I know there’s Brighteon, and they do have some decent stuff you can’t find elsewhere, but there needs to be a mass movement away from these Stasi companies.

Google e-cancer! The world allowed US to dominate the mobile phone industry. Enjoy

I keep repeating my Mantra, we’ll have to start a bloody violent revolution to make change. And no I’m not referring to the idiots at BLM or antifa, they couldn’t reason a target if it had a bullseye which handed them the bow and arrow with a poisonous tip. Got to hit the DS, and it’ll take millions of people working toward the same target.

ZH may be a bit wonky but hardly right wing. Its stories vary widely, mainly business. Its commentors, though, are rabid rednecks, ignorant right wing loons.