More importantly, Raz is supported by the Islamic government in Dubai.

The leader of CHAZ, Warlord Raz Simone was previously identified running guns in the newly formed country in the center of Seattle.  Today we have more on RAZ thanks to the work of Yaacov Apelbaum.

Raz the warlord, doesn’t only run guns, he owns guns.  Raz owns a couple of handguns, which were somehow ‘restored’ through a special intervention after a conviction. 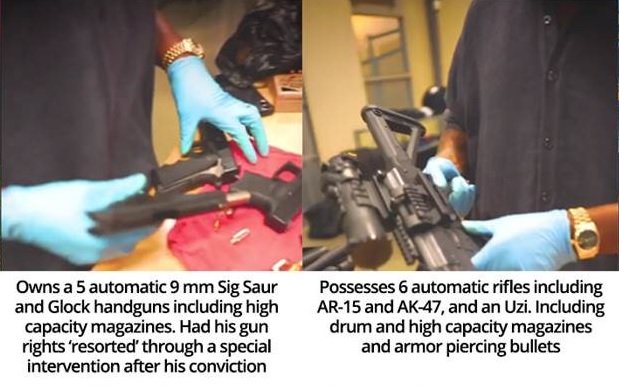 Raz also owns six semi-automatic rifles, including an AR-15 and AK-47 and an Uzi.

He has armor piercing bullets for these guns as well.

Raz somehow received a grant for $82,000 from the city of Seattle to open his own studio in a building he purchased with another loan.

And Raz owns multiple luxury cars, including a Tesla, a BMW and a Jaguar XJ.

He also owns some prime real estate and rental properties.

He owns the RAZ fashion line, the Aurora Smoke Shop, a social club called “The Spot”, the Black Umbrella Corporation.  All this came from funding in sweetheart deals.

Raz’s public relations team has done a lot of work to portray Raz as a gangsta’.  Oliver Darcy from CNN has helped him in shaping his image.

Finally, and most importantly, Raz is connected to Islamists.  He is involved in the manifesto, Washington State – the first black Muslim independent state.  He also is being sponsored and has been hosted by the Dubai government.  Raz’s anti-white and anti-America rants are supported.  He also has been spotted attending the Sheik Zayed mosque.

And the rest of the brain dead morons follow this idiot. Don’t they know they’re being played like a violin by the 1 percent? It’s all part of the agenda and the sooner the sheep realise it, the faster we’ll be rid of the sinister cabal.

I want to see Spetsnaz Alpha Group descend on these thugs. Be cleared out in under 20min.

Gotta say I couldn’t verify a single part of this story. The author(s) noted had no links with any facts with which to verify let alone cross check. I’d almost put it in the fake news column if it weren’t for your “the Duran” record over the past decade. Still I believe linking to places like the pundit, and some others the past 6 months has been more a generator as opposed to solid articles in the public interest. I know it’s been a crazy ride this year and you’re a small group who does amazing work. Maybe you can… Read more »

The fake news here is that The Duran has a record spanning a decade. They are not that old. Next is that they did not publish this content. Several people have permission to publish on The Duran without any supervision. There is NO actual editor. These are clickbait articles to bring eyeballs to the site and populate the site with content. What The Duran does not understand is that this is the kind of readership they attract in the long term and that educated readers that appreciate Alexander’s analysis are completely turned off by this unsubstantiated cr*p.

Who is the child who wrote this trash….