I made a personal decision that, during the course of the Russia-Ukraine war, I would refrain from posting opinions aside from one: That it is deeply important to understand both sides (or indeed, all sides) that are involved in this conflict. In fact, this conflict erupted, at least as far as President Putin believes (and said in his speeches) because the Western bloc shut Russia out and refused to listen to anything that Russia asked for, all the while encroaching on the country with its godless secularism, LGBT, pro drug-use and other really bad ideologies.

In this regard, I will have to find some really comprehensive material that is intellectually honest that backs the Western and specifically American point of view. So far, I have not found any, but I also have not looked – thinking that the American press does a pretty good job of presenting its side.

This is not true. It doesn’t. The American media is full of pithy soundbites and sensationalism to pull at its consumers’ emotions, but it is very much absent of any reasoned explanation for the war or why it is so important to consider all things Putin as “bad.” So, I will have to try to address this in order to present some forum whereby readers can get all sides of the dispute and they can reason it out for themselves.

The following piece could be called “from the Russian side” but in reality I think it is more pragmatic, which is good, because of the points it makes. It was passed to me, and I found it so useful I am reprinting it entirely. Its author, Alexander, is a deeply thoughtful writer, and his analysis is so good I want to give it wider audience.

The original piece is available on the Orthodox Reflections website, here.

When I taught in Eastern Europe, one of my co-faculty members was a law professor from Mexico. He was fond of saying, “Ahh…Mexico. So far from God, so close to the United States.” As a patriot, he often bristled at the amount of influence that the United States had over his country. He was a recovering communist revolutionary, having only changed his politics after returning to the Catholic Church. The level of corruption in Mexico still rankled him, but he had resigned himself to the reality of the situation.

Unless the US falls apart, Mexico will never be free to chart its own course. The same is true for all smaller, weaker countries in close proximity to a major power. It is simply a reality. The major power’s economic and security needs have to be taken into account by their neighbors, or bad things happen. That applies to Mexico, to Ukraine, to Estonia, to Vietnam, and to many other nations as well.

In 2014, the United States sponsored a coup in Ukraine that brought to power a junta of ultranationalist fascists. Imagine if China managed such a feat in Mexico City? How would the US react to a hostile state on our Southern border? Especially if communities of American citizens were being abused or even killed? The last time we faced a hostile Mexican government, we went to war and took 1/2 of Mexican territory. It was a very profitable border dispute for us.

Can you imagine if the 24 hour cable and online news cycle had existed in 1846, when the US Army and Marines were slaughtering Mexican soldiers and seizing Mexican cities, including the capital? This was immortalized in the hymn of the United States Marine Corps:

“From the Halls of Montezuma, to the shores of Tripoli…“

This is no defense, by the way, of war. As Metropolitan Onuphry said, “War is a grave sin before God!”Especially if that war is for territorial aggrandizement. This is merely a recognition of how great military and economic powers operate in our fallen world. Pretending the world is other than it is, does nothing but get innocent people killed.

The US would never tolerate a hostile regime in Mexico. Any thinking person knows that. An anti-American government would never be allowed to survive on our border. We usually don’t tolerate anti-American regimes anywhere in Latin America, no matter how far away. Remember Cuba with decades of sanctions and an actual invasion at the Bay of Pigs? Remember the attempted coup in Venezuela? Or the war against Nicaragua in the 80’s with the US-funded Contras? How about the coup in Chile in 1973? Chile is over 4,000 miles from Washington, D.C. Yet, the US installed a blood-soaked military junta to rule the place, being unwilling to accept a democratically elected socialist government.

Clearly, Washington believes there is one set of rules for the US and a different set for everyone else. Unfortunately for the American government, other major powers (and rising powers) don’t agree with that premise. Sadly for the Ukrainians, they have turned into a test case to prove which side is correct.

Hint: The Russians are, as will be evident soon enough.

Besides mucking up the political situation in Ukraine, the US used its influence over the Patriarch of Constantinople to attack the canonical Orthodox Church headed by Metropolitan Onuphry. Canonically, the Ukrainian Orthodox Church is self-governing, but her bishops are also part of the Moscow Synod. Western governments / media and supporters of Constantinople like to portray the current ecclesiastical conflict as Ukraine versus Russia. Or Patriarch Bartholomew versus Patriarch Kirill. Or West versus East.

Metropolitan Onuphry understood the need for Ukraine to maintain good relations with Russia. The geographic and historical ties are simply too deep for Ukraine to become permanently anti-Russian. His Eminence correctly said:

“The Ukrainian and Russian peoples came out of the Dnieper Baptismal font, and the war between these peoples is a repetition of the sin of Cain, who killed his own brother out of envy. Such a war has no justification either from God or from people.”

Good faith negotiations, which the US prevented, would have ended this crisis peacefully. In truth, if the US had minded its own business, there never would have been a crisis to begin with.

In the next few days, we will hear much about Munich, appeasement, Chamberlain and Hitler. All those historical allusions will miss the most important fact of the years 1938-39. WWII began because Poland relied on war guarantees from Britain and France. War guarantees that were completely hollow. Even if the Allies had had the troops to combat the Third Reich, they could never have deployed them in Poland. Geographical realties cannot be overcome by wishful thinking.

Believing the impossible, that the Allies could provide meaningful military assistance, the Polish government blundered its way into a war with Germany over Danzig. The Soviets piled on for good measure, and part of my Polish family eventually died in concentration camps. I carry the name of one of the victims.

A war that began to preserve Polish territorial integrity ended with Poland surrendered to the Soviets, bringing over 40 years of brutal communist rule. Britain and France never had any realistic capability to help Poland. The Poles were suicidally foolish to believe they did. Many smaller, Eastern European nations need to learn from Poland’s tragic example.

NATO cannot help Ukraine in this hopeless, fratricidal war. The future for Ukraine must be peaceful co-existence with Russia. The unity of the Orthodox Church in both countries assists in that, which is why the West was so keen to sever it.

The Church must remain united. The war must end. Ukraine will never join the EU or NATO. This is simply impossible.  As impossible, in fact, as Mexico becoming a military ally of China.

It is time to listen to Metropolitan Onuphry. It is time to pray for, and work for, peace before one more drop of blood is shed.

Alexander is a cradle Orthodox Christian, a member of the Greek Archdiocese, and a veteran of the U.S. Army

For an expert’s view on US-Russian relations, visit this post.

His Beatitude Onuphry, Metropolitan of Kiev and All Ukraine,

to the faithful and citizens of Ukraine,

Dear brothers and sisters! Faithful to our Ukrainian Orthodox Church!

As the Primate of the Ukrainian Orthodox Church, I address you and all citizens of Ukraine. A disaster has happened. Unfortunately, Russia has launched military operations against Ukraine, and at this fateful time I urge you not to panic, be courageous and to show love for your Motherland and for each other. I urge you, first of all, to intensify repentant prayer for Ukraine, for our army and our people, I ask you to forget mutual strife and misunderstandings and unite in love for God and our Motherland.

In this tragic time, we express our special love and support to our soldiers who stand guard and protect and defend our land and our people. May God bless and keep them!

Defending the sovereignty and integrity of Ukraine, we appeal to the President of Russia and ask him to immediately stop the fratricidal war. The Ukrainian and Russian peoples came out of the Dnieper baptismal font, and the war between these peoples is a repetition of the sin of Cain, who out of envy killed his own brother. Such a war is not justified either by God or by people.

I call on everyone to common sense, which teaches us to solve our earthly problems in mutual dialogue and mutual understanding, and I sincerely hope that God will forgive us our sins and God’s peace will reign on our earth and throughout the world!

Metropolitan of Kiev and All Ukraine

Primate of the Ukrainian Orthodox Church

This video link I placed is partly to attract attention to this piece, BUT it also gives some long and further analysis and thoughts about what is going on as offered by the inimitable Dr Steve Turley. It is definitely worth a listen, though it is a lengthy one. 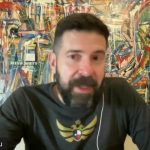