Russian dissident Alexei Navalny offered a lengthy denunciation of Twitter’s decision to permanently ban President Trump saying that it appeared to be “based on emotions and personal political preferences.” Navalny, a ferocious Kremlin critic, only narrowly survived after he was poisoned in August with the nerve agent Novichok by agents of Russian President Vladimir Putin.

Facebook CEO Mark Zuckerberg and his company are suddenly facing a big new round of scrutiny and criticism about their cavalier attitude toward user privacy. An early instant messenger exchange Mark had with a college friend won’t help put these concerns to rest.

5 2 votes
Rate this article
Help us grow. Support The Duran on Patreon!

It called: FASCISM! “So this is how liberty dies…with thunderous applause.” [Padmé Amidala]

“Fascism should more appropriately be called Corporatism because it’s a merger of state and corporate power.” [Benito Mussolini]

Facebook indeed. I could think of better four-letter words to put in front of book, but I will let you use your own imagination.

It can only go one way folks. 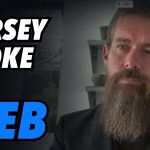