The move towards economic nationalism, preserving nation, language, religion and culture is surging, and the globalist elite are showing their true colors by supporting one of Communism’s main weapons – abortion.

However in a globalist-aligned mainstream media, they appear to be banking on not being noticed for what they are saying.

CNN, Bloomberg and CBS all reported on the news that about 180 companies went on record as opposing the state of Georgia’s new and severe restrictions on abortion, passed into law by the government and people of that state. CBS News’ website reported it this way:

Chief executives of more than 180 companies are urging lawmakers to step back from restrictive abortion laws, arguing that they “hinder people’s health, independence and ability to fully succeed in the workplace.”

Their move to take a stand on the issue follows pushback from Hollywood studios over restrictive laws targeting reproductive rights, such as Georgia’s law that would ban abortions as early as six weeks, upon detection of a fetal heartbeat. Director Spike Lee last week urged Hollywood studios to pull the plug on projects in Georgia, saying it was time for productions to “shut it down” in protest of the law.

Netflix and other major media companies, including Walt Disney Co., NBCUniversal, Sony Pictures and CBS and Showtime, have said they are reconsidering their hundreds of millions of dollars in investments in states where so-called heartbeat bills have either been passed or are already in effect.

The CEOs’ letter, titled “Don’t Ban Equality,” was sparked by what the signers call an “alarming trend of bans passing in states across the country that restrict access to comprehensive reproductive healthcare, including abortion.” The group cited research from polls that show a majority of Americans believe having control over their reproductive health care is essential for a person’s economic success.

The full text of the ad / letter is available for view by following this linked text:

What we see here is very simple: For these company heads, money is more important than anything, including the sanctity of human life. Babies are a problem for these people.

That is expensive. So, the solution is simple: Abort your baby and keep working for us. Then we make more money and you actually work for us, ladies. Throw off the hierarchy of women-only as bearers of children and the power of the male patriarchy. Get your revenge ladies. Work for us and in so doing, show the world your power! 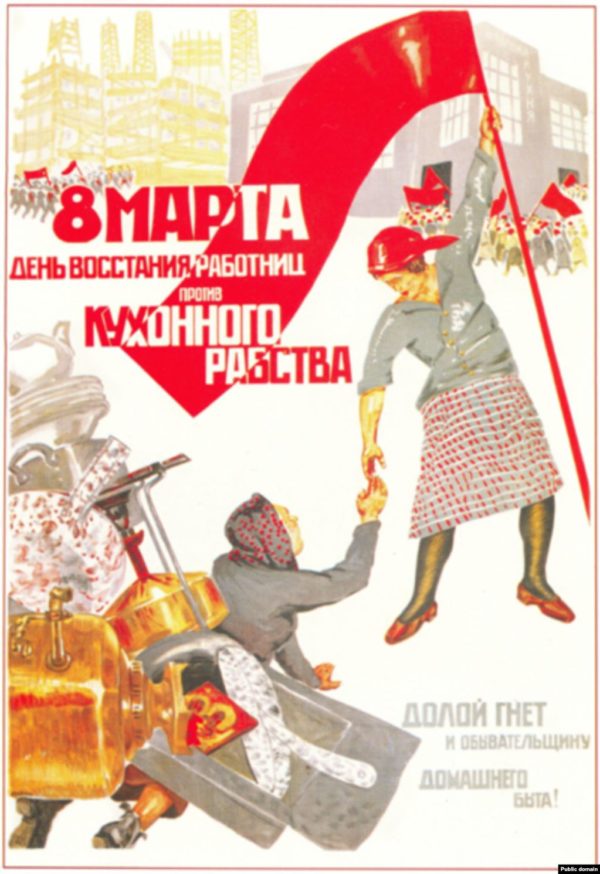 For those of us who do not read Russian, the inscription in the lower right corner is translated thus:

Down with oppression and Philistine home life!!

It is most interesting to see the names of the companies and people who are supporting such a crusade. Let us have a look at a few of them:

And a slew of fashion concerns and many more. Take a look.

And they could not be much more blunt about it. They even made sure to include the word ‘abortion’ in their statement, rather than to cover it up in ‘a woman’s right to choose’ Newspeak (we added emphasis):

Restricting access to comprehensive reproductive care, including abortion, threatens the health, independence and economic stability of our employees and customers. Simply put, it goes against our values and is bad for business.

In a way, perhaps this is correct. Abortion is good for business. It keeps women in the office, working as hard as they do (which is usually very hard indeed), and saps their energies for the sake of a paycheck that is still usually lower than the pay men draw in many companies. The message reaches beyond the matter of abortion in case of some tragedy, but it is easily seen as an over extension of corporations as they visibly intrude into the lives of their employees.

There is no virtue being expressed here. As Democrat Rep. Ilhan Omar so famously said, “It’s all about the Benjamins.”

All this is in reaction to the burgeoning wave that appears to be a backlash, not just in the US, but across the world, where free-trade oriented globalism is being challenged by a sharp rise in what has come to be called “economic nationalism”, which asserts that each nation is sovereign within its own territory, and while we may do great business with one another, we are not about to combine into the World State, a place devoid of tradition, culture and religion, where the idea of prosperity is limited to financial well-being (that is, according to the elite’s idea of what constitutes ‘well-being’ for the rest of us.)

One very good thing about all this is that the nicey-nice language covering the Culture of Death is going away. As we saw in New York with the passage of the abortion at any stage of pregnancy law, abortion fans have a much bigger motive in mind than just “the rights of the woman.”

And here, we see that the rights of the woman do not matter, once again. Here we just saw a protest from corporate entities, most likely all of whom are personally extremely well off financially, imposing their will to not lose profit upon the lives and consciences of the people of Georgia, who as a state, decided they wanted not to be so loose about death as they had been in the past.

The surge in abortions that accompanied the Roe v. Wade decision in 1973 is long gone. Abortion rates have been falling on their own in the US and other countries because it is being seen for what it truly is – a weapon against women by those who wish to exploit them, and a tragedy of unimaginable proportions for women who undergo the procedure. Now the pendulum is moving towards a radically more conservative viewpoint, and it is doing so organically.

The globalist elite cannot understand this, nor can they accept it, so they seek to impose their will upon people by force to get their way.

Good going, folks. You are in the company of some famous people who thought just like you: Karl Marx, Vladimir Ulianov (Lenin), Mao Tse Tung, Adolf Hitler, Pol Pot, and so many others.

It is a great thing to the rest of us that you have revealed yourself truly and honestly.

“Good going, folks. You are in the company of some famous people who thought just like you: Karl Marx, Vladimir Ulianov (Lenin), Mao Tse Tung, Adolf Hitler, Pol Pot, and so many others.” One of these is not like the others. Adolf Hitler does not belong among these Jewish Bolshevik inspired mass-murderers of their own people. Adolf Hitler loved his own people.

It is way past time that Adolf Hitler and the Third Reich were rehabilitated and the truth about the Jewish-Bolshevik mass murder of Sixty-Six million Slavic people in Ukraine, Russia, Belarus and elsewhere be revealed to the world, instead of being buried forever by the Jew controlled mass media.

Not so keen on massive abortions of Jew babies in Israel though.