As the Trump administration ramps up its trade war with its allies and trade partners, some of them seem to be reluctant to admit this new reality, refusing the formation of an alliance to combat Trump’s economic warfare at the World Trade Organization (WTO). China has proposed a sort of alliance with the EU to oppose Trump’s tariffs measures before the WTO, whereas the EU is of the opinion that this is not a necessary step, hoping that the situation can still be defused through strategic diplomacy.

While both the EU and China have both slammed Trump’s tariffs and overall protectionist position, the EU simply doesn’t want to admit the reality that Washington’s position is that of waging economic warfare for its own unilateral benefit, therefore refusing to take a multilateral stand on the matter before the international trade dispute organization. The EU may side with China in complaining about the situation, but clearly doesn’t want to do anything about it in a joint fashion, perhaps because they are living in the fantasy world that Trump can be reasoned with on matters which he has already committed himself.

The European Union has turned down China’s proposal of co-operation against escalating US trade tariffs on European and Chinese goods.
China proposed launching joint action against the United States at the World Trade Organization (WTO), EU officials and diplomats told Reuters ahead of a Sino-European summit in Beijing on July 16-17.

Chinese Vice-Premier Liu He told the media that Beijing is ready to set out for the first time which sectors it can open to European investment at the annual summit.

According to EU officials, Chinese state media has promoted the message that the European Union is on China’s side, putting the bloc in a delicate position.

“China and European countries are natural partners,” it said. “They firmly believe that free trade is a powerful engine for global economic growth.”

Rejecting the idea of partnership on the trade issue, one European diplomat said: “China wants the European Union to stand with Beijing against Washington, to take sides,” adding, “We won’t do it and we have told them that.”

Washington has hit Chinese and European goods with tariffs as part of President Trump’s attempt to narrow the US trade deficit with its trading partners. China has been the biggest target of Trump’s tariffs.

Last month, the White House announced that it would introduce the latest 25-percent duties on 818 items of Chinese imports worth $34 billion on July 6. Beijing said it has prepared reciprocal levies against American products, which will be introduced on the same day.

But this isn’t the only trade aspect with which the EU is presently in opposition with China. Some 16 different Central and Eastern European nations are interested in increasing trade and economic investment with Beijing. At the upcoming seventh 16+1 summit, 16 Eastern and Central European nations are to gather together to talk trade and investment. The Western EU nations, on the other hand, are committed to the perspective that China presents a threat to the political institutions of the West by using economic leverage to undermine and threaten the European Union.

However, if division is the problem, it would rather seem that forcing 11 of the 16 nations hoping to deepen business ties with China to choose between the bloc and China would be the centrifugal issue, rather than that of cooperation. That’s forcing a choice between the crumbling institutions of the West and the growing influence and prowess of the East, and it would be a mistake to hang onto a sinking Titanic instead to taking a place on a life raft. Furthermore, it demonstrates hypocrisy as several Western European countries, who have been in a mission to increase their business with Beijing, telling Eastern European members that they can’t do the same, meaning that the big boys in the bloc can do it, but the smaller ones can’t. Domestically, Europe wants to stifle its economic ties with China, perceiving China as a threat, while Internationally, they refuse cooperation with China on protecting their own trade rights in the fight against American led protectionism. Europe, therefore, appears want to fight this trade war alone, while dividing the loyalties of its own crew.

The Orange haired Trumpanzee gets his way with the EU!

lets put this into perspective. the trade deficit is tilted WAY over to the chinese side. they get more goods for less money. the USA is their biggest buyer of goods, however. right now, with a 25% tariff on steel from canada, there are 2 steel mills in birmingham alabama that are coming online. US steel is some of the best in the world simply because we have the best formulas for MAKING steel. the TOTAL US percentage of trade WORLDWIDE, is 12%. china? according to worldbank.org, china gets 18% of it’s GDP from export. and most of it is… Read more »

The EU is being forced to choose between the destruction of the Atlantic Alliance and the splitting apart of the EU. This would never have happened under a Hillary presidency. In his role as The Great Disruptor, Trump is dismantling the post WWII order at an amazingly fast pace. We live in astounding times.

‘Sinking Titanic’ is a perfect metaphor. In other words, the EU (not Europe per se) obediently demands it’s smaller vassals must cling to the sinking US hegemon, knowing the certainty of catastrophe that that will inflict on those European populations, whilst it’s core elite seek the life-rafts and wait for their Eurasian saviours.

Personally I hope they remain adrift until the sharks get them. 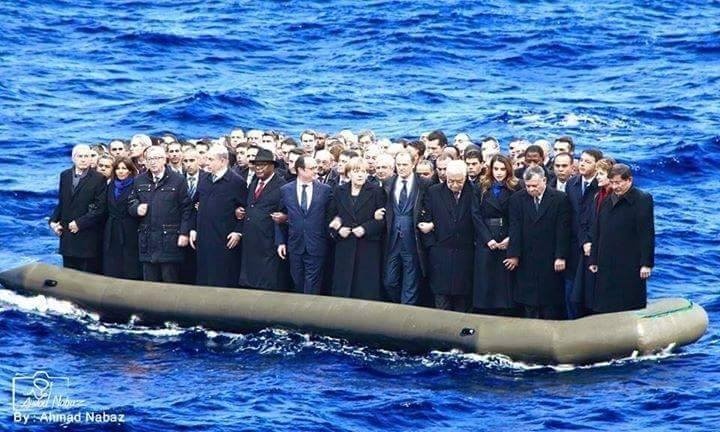