Yanis Varoufakis once described negotiating with the European Union like you’re singing the Swedish National Anthem. No matter what proposal you put in front of them, they acted like they didn’t understand and simply reiterated terms.

But, at least then they heard something. It may have been gibberish to them, but at least sound waves made it to their ears.

Today, these people are like overwhelmed autistic kids needing noise canceling headphones to blot out the unwanted stimuli. It may be therapeutic but it doesn’t solve the situation.

Now that Brexit is complete the EU has gone one step further, blocking out the very real strategic and tactical disadvantage they are in dealing with the United Kingdom in trade deal talks.

The arrogance and intractability of the EU when it comes to negotiations is supposed to be their biggest weapon. They project a strange combination of strength and indifference that can only come from people thoroughly insulated from personal accountability for their mistakes.

Lead negotiator, the revealed to be inept, Michel Barnier has laid out his negotiating stance using the same language that was thoroughly rejected by British Prime Minister Boris Johnson in October, the so-called “level playing field” of “regulatory alignment” as the basis for any kind of trade deal.

Has Barnier learned nothing from his last failure? Does he really think he can cover his ears, curl up in the corner and hope this all goes away?

Because if he does then he’s catastrophically misread the state of the game board.

Moreover, he’s convinced the European Council and Parliament that the way to ultimately win is to keep doing the same things that just failed.

Since they just overwhelmingly approved Barnier’s strict negotiating demands to the U.K. further signaling that they have no idea of the hornet’s nest they’ve just whacked with a baseball bat, oblivious to the buzzing and warnings coming from the U.K.

Mr Barnier said: “Any future agreement will need approval from MEPs. The deadline for the transitional period can be extended but the UK is still insisting on a deal being done by December 31st.”

{Tom’s response: because it’s now U.K. Law Mike, or did you miss that too?}

He again warned that if there’s no agreement by then, the UK will leave the customs union and single market and go back to WTO terms, meaning quotas and tariffs on British products.

{Tom’s response: and so what? Y’all run a trade surplus with the U.K. Or are you economically ignorant as well as stupid?}

Michel Barnier said: “I would like to take this opportunity to make it clear to certain people in the United Kingdom bearing authority that they should not kid themselves about this – there will not be general, open-ended, ongoing equivalence in financial services.”

The EU would “retain a free hand to take our own decisions”.

{Tom’s response: Free to ignore reality at your own peril}

Barnier threatening the financial sector is an empty threat to get City of London bankers and traders to pressure Johnson into standing down. They were the loudest complainers during the fight over Brexit.

But Johnson understands something Barnier refuses to admit, because, as always, he doesn’t listen he just demands. Brexit was won in spite of London. Its political power is waning.

Without the support of the Midlands and the hollowed-out industrial north, Johnson isn’t Prime Minister. Barnier tried for three years to leverage City of London and failed.

Ladies and gentlemen I give you Mike Barnier, walking Einstein quote machine.

This is an empty technocratic threat issued by a career bureaucrat with an over-inflated sense of his own relevance.

The U.K. holds all the negotiating levers here and they’ve accelerated the time table while Barnier is oblivious.

Barnier has until the end of June to take off his headphones and let information into his brain that comports with reality. The collapse of the Remain coup in October was a strong message to the EU that they are vulnerable and that Barnier’s schtick is tired.

And because of this Boris Johnson has not only hardened his tone but also gone further than he did on the campaign trail, saying that even a Canada-style free trade deal may not be enough.

Now he’s invoking Australia as a proxy for a WTO-style ‘hard Brexit.’ And all Barnier can do is threaten tariffs and trade war. This is exactly the kind of idiocy that the British just fought three and a half years to divorce themselves from.

And this is coming from a political body with no hope of passing a budget this fall when a politically paralyzed Germany takes over the Presidency of the European Commission. A budget, I might add, that is staring at a €10+ billion hole thanks to the loss of the U.K.

The possibility of German political upheaval is causing the euro to crash uncontrollably. After a massive move up on the final day of January to avoid a technical breakdown the euro is not flirting with a crash to the 2017 low of $1.034 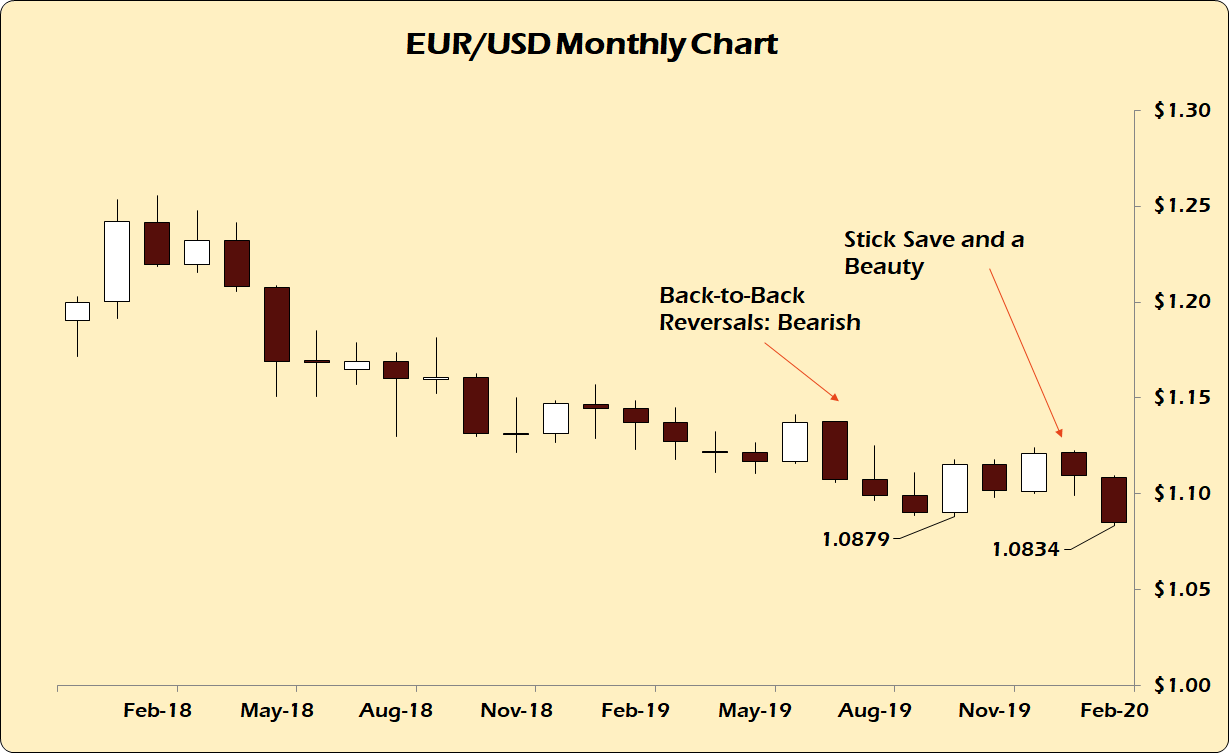 The fear here is a quick steepening of the German yield curve which is now flat to inverted out to 7 years. No wonder Mario Draghi restarted QE before he blew town to leave this mess to Christine Lagarde, without that in place there would be real trouble in European sovereign debt markets.

But a political disunion that is deaf not only to what its external critics are telling it but its internal ones as well has a limited self-life of invest-ability. Once momentum traders stop front-running the ECB and the euro’s weakness forces the unwinding of carry trades at that point someone will have to tap Barnier on the shoulder and tell him to listen to something approximating reason.

By this point, to be honest, it will likely be too late.

The Irish elections were a huge rebuke of the EU and how it handled Brexit negotiations. It was an outright embarrassment to have Sinn Fein coalesce the Irish Euroskeptic vote. And yet, the EU hasn’t learned a thing because they refuse to listen.

So what happens when we wake up one morning and Angela Merkel is no longer Chancellor of Germany, the Yellow Vests overthrow Emmanuel Macron in France or Matteo Salvini wins an Italian snap election from a jail cell in Rome?

Will they hear the populist barbarians at the gates then or will they continue to console themselves with dreams of Sweden?

Install the Brave Browser is you want to empower yourself to decide who you listen to.

EU has always been deaf and dumb. Nothing new!

I would add blind to deaf and dumb. It apparently doesn’t see the rising discontent of people in Europe.

Maybe the EU apparatschiks see the rising discontent of people in Europe. They are not interested because people do not count.

And I bet they love their 30,000 Euro a month (!!) jobs and the nice expense accounts they entitle themselves to, such as second homes, free education for their kids, travel expenses, etc. Michel Barnier managed to spend a total of 47,000 Euro on 59 trips across the Channel to Westminster for Brexit meetings. The EU has a nice big trough.

Yes! Brussels is a centralized trough to feed the EU pigs and piglets. That’s where a great part of our tax payers money goes to.

Eff you europhobics, good riddance of UK ! De Gaulle was right, it should have never come into the EU. He knew the treacherous nature of Perfida Albion, the Trojan Horse of the bastards of the other side of the pond 🙁 Scum !

We obviously value our sovereignty. We grew very tired of the EU scum making decisions for itself and its masters rather than for the people of Europe. Yes, de Gaulle was right, but that was over the UK’s entry into the EC, not the EU. Many Britons agreed with him and did not want to join the EC. The UK joined the EC on 1 January 1973, along with Denmark and the Republic of Ireland. It feels very good to be out. Don’t forget that de Gaulle died 23 years before the EU was formed. I don’t think he would… Read more »

Support for EU Membership Above 80% in Most Member States Amid Brexit Mess
Independent 26.4.19
https://www.independent.co.uk/news/world/europe/brexit-eu-survey-italy-ireland-portugal-eurosceptic-poll-a8888126.html

That’s all Brussels has EVER said to the people of Europe: “Eff you you moronic sheeple people thinking you are citizens of some sovereign country and that you have a right to self-government! Who T F do you think you are? WE are your bosses now, you peons, so STFU!” So hey, reggie, tell your this-side-of-the-pond-scum EU self-important dictocrats to go unite Africa, or better, Antartica…the huge majority of its inhabitants don’t speak, so they won’t have to listen, as they clearly prefer.

Eh, Tom, I’m an Irish elector. At no time did Sinn Fein, or any of the parties of the left, or right, invoke the EU during the election campaign. There was no “Euroskeptic” vote, in fact, the EU was never mentioned by any party.
Please report on facts, not on what you would have liked to have happened.

I think it was clearly an ‘anti-establishment’ vote, and in Europe the EU are the establishment, and have long been fully supported by the two ROI establishment parties … who got humiliated by Sinn Fein in the election.

I am struggling to understand EUphobia.

Obviously the point of Russophobia and Sinophobia is so everybody will be happy when we nuke them. What then is the point of EUphobia? Are we planning to nuke them too?

Answers welcome. Any insult or down-vote will be taken as a compliment.