The European Union has expressed its “grave concern” about the upcoming drilling to be conducted by Turkey in the Exclusive Economic Zone of Cyprus.

Turkey does not recognize the government in Nicosia or its agreements regarding EEZ. Ankara thinks that the right to extract gas should also be exercised by the Turkish Cypriots and also by Turkey in the case of Blocks 4, 5, 6, and 7, through which – according to Ankara – passes the Turkish maritime border (the map below). 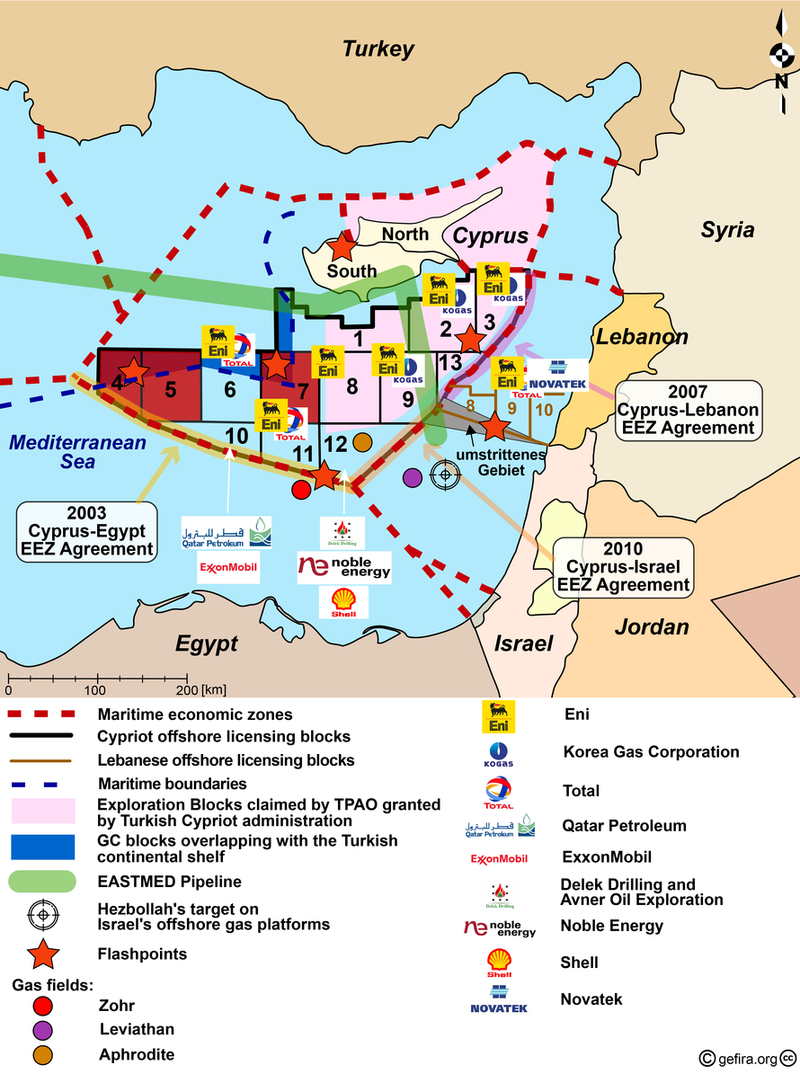 Mogherini pledged to “respond appropriately and in full solidarity with Cyprus.”

“We express grave concern over Turkey’s announced intention to carry out drilling activities within the exclusive economic zone of Cyprus. In March 2018, the European Council strongly condemned Turkey’s continued illegal actions in the Eastern Mediterranean. In this context, we urgently call on Turkey to show restraint, respect the sovereign rights of Cyprus in its exclusive economic zone and refrain from any such illegal action to which the European Union will respond appropriately and in full solidarity with Cyprus.”

As we poreviously noted, according to a recent statement from Greece’s Ministry of Foreign Affairs:

“Greek-Turkish disputes over the Aegean continental shelf date back to November 1973, when the Turkish Government Gazette published a decision to grant the Turkish national petroleum company permits to conduct research in the Greek continental shelf west of Greek islands in the Eastern Aegean.

“Since then, the repeated Turkish attempts to violate Greece’s sovereign rights on the continental shelf have become a serious source of friction in the two countries’ bilateral relations, even bringing them close to war (1974, 1976, 1987).”

This friction has only increased with the authoritarian rule of Turkish President Recep Tayyip Erdogan, particularly since, as Uzay Bulut notes:

There is one issue on which Turkey’s ruling Justice and Development Party (AKP) and its main opposition, the Republican People’s Party (CHP), are in complete agreement: The conviction that the Greek islands are occupied Turkish territory and must be reconquered. So strong is this determination that the leaders of both parties have openly threatened to invade the Aegean.

The only conflict on this issue between the two parties is in competing to prove which is more powerful and patriotic, and which possesses the courage to carry out the threat against Greece. While the CHP is accusing President Recep Tayyip Erdoğan’s AKP party of enabling Greece to occupy Turkish lands, the AKP is attacking the CHP, Turkey’s founding party, for allowing Greece to take the islands through the 1924 Treaty of Lausanne, the 1932 Turkish-Italian Agreements, and the 1947 Paris Treaty, which recognized the islands of the Aegean as Greek territory.

This has been Turkish policy despite the fact that both Greece and Turkey have been members of NATO since 1952. Greece became a member of the European Union in 1981 — a status that Turkey has spent decades failing to achieve, mainly due to its human-rights violations.

Recently, EU and Turkish officials met in Brussels on November 30 to discuss an intelligence-sharing agreement between the European Police Service (Europol) and Ankara. Such an agreement is reportedly one of 72 requirements that Ankara would have to meet in order to receive visa-free travel to the Schengen zone.

Ankara’s ongoing challenges to Greek land and sea sovereignty are additional reasons to keep it from enjoying full acceptance in Europe and the rest of the West.

The real reason why Turkey is not admitted into the EU is religion, not human rights. The latter is only a cover to hide that religious discrimination against Muslims is the real cause for the rejections. The EU is afraid of the 70m Turkish Muslims that could then settle anywhere in the EU, thereby drastically increasing already high Muslim numbers in countries like Germany and Scandinavia, which are the most prosperous members of the EU. Remember when Berlin became the largest Turkish city back in the 70’s?