The Duran’s Alex Christoforou and Editor-in-Chief Alexander Mercouris discuss the surprising response, beyond threatening rhetoric, out of the European Union over Turkey’s violations of Cypriot territorial waters related to offshore drilling operations.

The EU has agreed to bring financial and political sanctions against Turkey after repeat warnings over the past weeks.

EU’s foreign policy chief Federica Mogherini told reporters following a meeting of foreign ministers that “the conclusions on Turkey have been adopted and they will be made public in the coming hours.”

Perhaps to be expected, Turkey’s response to yesterday’s EU announcement of impending economic and political sanctions to be brought against Ankara has been to swiftly and immediately double down on drilling, while dismissing the crisis as “not serious”. Turkey has now sent its fourth oil and gas exploration ship to the eastern Mediterranean after European leaders condemned its drilling in EU-member Cyprus’ territorial waters. Turkish Foreign Minister Mevlut Cavusoglu responded:

“Calling the EU’s decision sanctions means taking it seriously. You shouldn’t do that, the decision was made to satisfly Greek Cypriots. These things don’t have any effect on us.”

Turkey’s Anadolu Agency reports, “Turkey will send its fourth ship to the Eastern Mediterranean region to continue its exploration and drilling, the country’s energy and natural resources minister said on Tuesday. It will join the Fatih and recently deployed Yavuz, and the seismic vessel the Barbaros Hayrettin Pasa which has conducted exploration in the Mediterranean since April 2017.

This was accompanied by FM Cavusoglu warning the EU that Turkey plans to increase its drilling and exploration activities in the East Mediterranean while “protecting the rights” of Turkish Cypriots. Ankara’s position is that it has the same rights as the Greek Cypriot government to drill in the region, which Turkey interprets as including waters that expand 200 miles from EU member Cyrprus’ coast, brazenly asserting ownership over a swathe of the Mediterranean that even cuts into Greece’s exclusive economic zone.

On Monday, following a meeting of EU foreign ministers in Brussels, the European Union announced that it will bring sanctions against Turkey for violating Cyprus’ waters, which has also involved Turkey sending drones, F-16 fighters, and warships to escort the few drilling ships it’s already deployed off Cyprus.

“Today, we will adopt a number of measures against Turkey — less money, fewer loans through the European Investment Bank, freeze of aviation agreement talks. Naturally, other sanctions are possible.”

“We are fully behind Cyprus,” the EU official added while addressing the crisis.

???? | The 4th #Turkish ship heads to the East #Mediterranean#Turkey's seismic research vessel "MTA Oruç Reis" has been dispatched to the East Med area. The ship was operating in the #BlackSea and the Marmara Sea since 2017.pic.twitter.com/nJPVATGdKt

Meanwhile, there are unverified reports that Turkey has struck major gas reserves, which if confirmed will only intensify the crisis. Per Turkey’s Ahval news:

Turkey’s drill ship “Fatih” has found its first gas reserves in the potentially hydrocarbon rich area around the island of Cyprus, Turkish Cypriot newspaper Kıbrıs Postası reported on Monday. The Fatih is the first Turkish surveying vessel to begin drilling in the seas around the island. The second, “Yavuz”, began drilling operations in July.

A Greek Cypriot newspaper, Fileleftheros, reported earlier this week that the Fatih had struck gas reserves of up to 170 billion cubic metres in the waters off Paphos in Greek Cypriot-controlled southwest Cyprus. Kıbrıs Postası quoted a diplomatic source as saying the story was credible.

“It’s true that Turkey found something”, the newspaper quoted its “high level” source as saying. The source said a formal announcement would have to be made by the Turkish Petroleum Corporation. 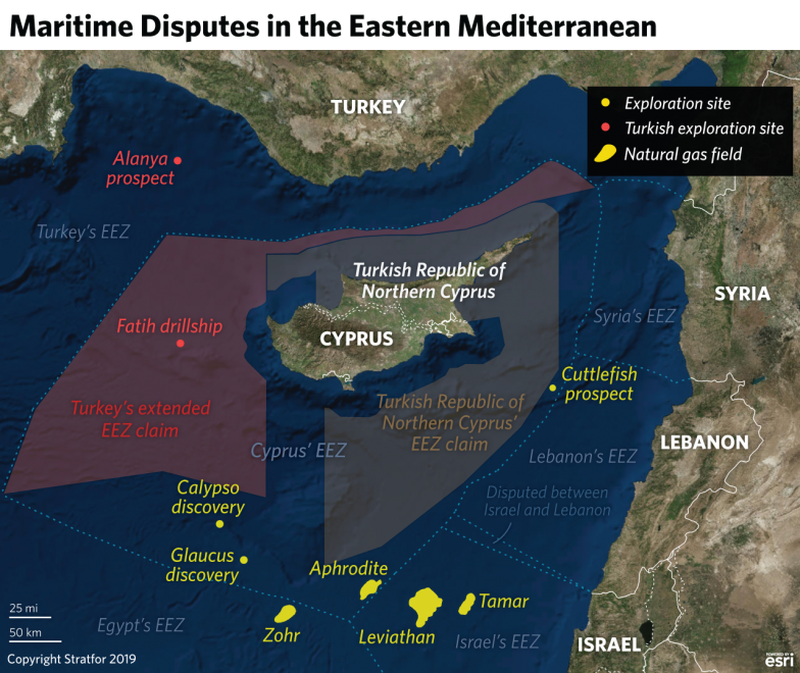 Last week the Turkish drilling vessel Yavuz sailed to an area off Cyprus’ east coast — the second to follow a first drilling vessel, Fatih, which had already been exploring in Cypriot waters. Turkey has sent military assets to “protect” the vessels from interference.

Cyprus has long condemned Turkey’s aggressive oil and gas explorations as a “second invasion” in reference to the creation in 1974 of the breakaway Turkish Republic of Northern Cyprus after a military takeover.

I agree with Alexander. The push in Cyprus is too much and is not vital for Turkish economic interests.
Erdogan has to understand that one cannot serve two masters at the same time. If he hasn’t learned this age-old wisdom by now, it will be his downfall.

Clash of the Titans

Thank that a-hole McCain for pushing SouthStream out of Bulgaria and into Turkey, empowering Erdogan to start pushing his weight around. The EU stood idly by while the US strong armed it, now it gets to learn the consequences of playing ‘how high should I jump, massah Sam?’ The only lesson to be learned here is that when the US starts punching above its weight, the EU will be sure to suffer the consequences. Maybe now that that Yankee Trojan Horse, the UK, will be out of the EU, they’ll manage to grow some huevos. PLEXIT next., another Trojan Horse.… Read more »