The Duran’s Alex Christoforou and Editor-in-Chief Alexander Mercouris discuss Turkey’s provocative move to lay claim to large natural gas findings in Cyprus’ Exclusive Economic Zone, where large energy companies, like Exxon Mobile and France’s Total, are currently operating, in coordination with the Republic of Cyprus, to develop the waters in the Mediterranean for natural gas export to Europe.

Turkey kicked off its “largest ever” military drills conducted in the Mediterranean and Aegean Seas on Monday. Though the drills are pre-scheduled “annual” exercises, the massively beefed up Turkish naval presence comes as Cyprus is pressing the EU to address illegal Turkish oil and gas drilling inside Cyprus’ exclusive economic zone.

Turkish state-run TRT World described the exercise known as “Sea Wolf 2019” as including a total of 131 warships, 57 warplanes and 33 helicopters — the largest force deployment in the exercise’s history.

The games will extend to the Black Sea as well, and is set to run through May 25; it will further involve “submarines, frigates, naval artilleries, armed UAVs, as well as search and rescue units” engaging in “strategic and operational exercises with scenarios similar to crisis-tension situations and wartime,” according to Turkish sources.

The west supported Greek Cypriot government and Turkey – the latter which occupies northern Cyprus – have overlapping claims of jurisdiction for offshore oil and gas research in the natural gas-rich eastern Mediterranean.

Turkey has laid claim to a waters extending a whopping 200 miles from its coast, brazenly asserting ownership over a swathe of the Mediterranean that even cuts into Greece’s exclusive economic zone. Ankara has in the past demanded that Cyprus formally recognize the breakaway Turkish Republic of Northern Cyprus (since 1974) and allow it to share revenues from Cypriot gas exploration.

As a sign of strength, #Turkey has launched new naval exercises as it has begun drilling for #gas near #Cyprus. Turkey signals to #Greece, the #EU and the #US that it is serious in defending its interests. 131 warships, 57 planes and 33 helicopters participate. pic.twitter.com/9VBfXlqB09

Meanwhile, Turkish President Recep Tayyip Erdogan has reportedly been provocatively sending  warships in support of gas exploration and drilling vessels near Cypriot waters over the past months in order to ward off foreign competition to oil and gas research, according to Cypriot officials, also seeking to bar Cypriot ships and planes from freely traversing its own European recognized waters.

Turkish state media footage of the games as they kick off Monday.

On Monday TRT World reported separately just as the war games were kicking off:

Ankara plans to start drilling near the island of Cyprus, in a project that Turkey says is within the rights of his country.

Elaborating on the issue, Turkish President Recep Tayyip Erdogan said, “The legitimate rights of Turkey and the Northern Cypriot Turks over energy resources in the eastern Mediterranean are not open for argument. Our country is determined to defend its rights and those of Turkish Cypriots. We expect NATO to respect Turkey’s rights in this process and support us in preventing tensions.”

The extensive Turkish claims around Cyprus have been condemned by the US, European Union, and Egypt, with NATO officials recently signalling to Turkey that it was out of line.

But Turkish Foreign Minister Mevlut Cavusoglu confirmed early this month that “we are starting drilling” in the region, perceiving that EU and NATO leadership have merely long paid lip service to Cypriot and Greek complaints.

Should the Turkish military attempt to enforce its drilling claims and run up against Cypriot and Greek vessels, it could spark a deadly encounter which would force the EU and NATO to finally weigh in more forcefully. 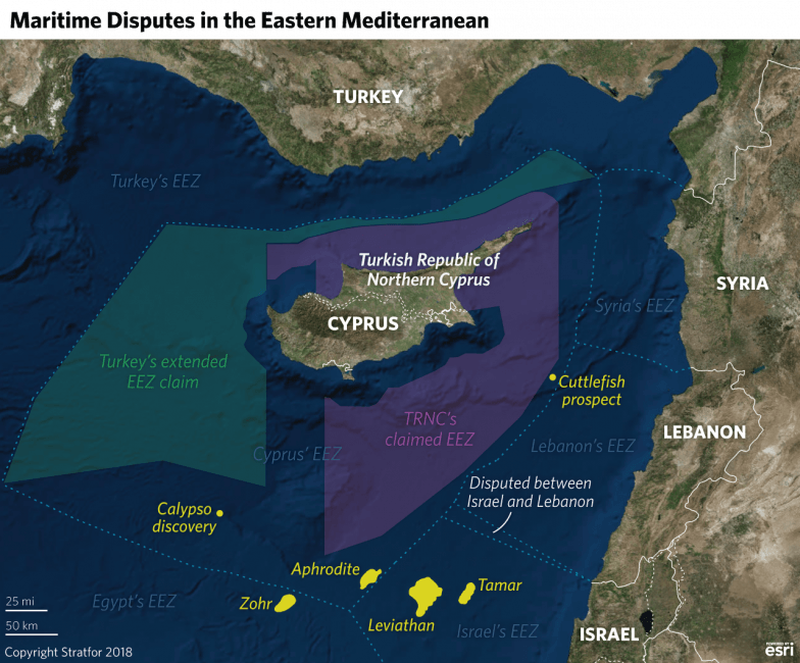 Turkey has been frequently flexing its military might amid the territorial showdown, conducting the “Blue Homeland” drills between Feb. 27 and March 8 earlier this year.

So this week’s massive naval exercise will be the second in only a few months, just as EU leaders are planning to consider Cyprus’ allegations during meetings at the end of May and in June

What is Turkey doing in NATO anyway, if it has an ongoing border dispute in Cyprus?

NATO is a joke. It reminds me of an octopus, not only from its greedy little tentacles but that it can so easily slither in and out of its own founding mandates…. and very reason for existence, which BTW: changes more often than the weather in Cyprus.

Imitation is Fun
Reply to  PLATO & NATO are antonyms

Guess what man-child uttered these words? We protect Germany (from Russia I’m told, maybe China?), very expensive btw, so Germany should only buy our gas, or maybe Russia’s gas through Ukraine, that might be OK I guess. Anyway, Germany should be like Saudi Arabia. We protect them (from Iran they tell me) and they spend mountains of money on our arms. I guess they don’t need our gas, so arms it is. What’s so hard to understand? Germany – ask the Saudis how it’s done. We’re even installing 5G in Riyadh. They like to watch camel races in real time.… Read more »

I Object
Reply to  PLATO & NATO are antonyms

Octopi are pretty smart creatures. They can navigate alternate and complex routes to reach their goal when presented with a challenge. NATO, on the other hand, is like the proverbial (mental) asylum seeker……repeating the same solution to ever changing challenges, even creating or imagining the problems so that it can use the same approach in its attempts to solve them, and just repeating themselves over and over just to appear relevant. The octopus will have accomplished its goal every time, with a myriad of solutions left in its wake while NATO will have fallen short of its goal time and… Read more »

“What is Turkey doing in NATO anyway, if it has an ongoing border dispute in Cyprus?”

It amazes me to see even the educated and sophisticated Greeks such as yourselves can not help but loose objectivity when it comes to affairs related to Turkey. First, in relation to Turkey invading northern Cyprus you intentionally skipped the part where, for decades, Greek Cypriot thugs (EOK) killed innocent Turkish Cypriots and after a coup on the island which put all Turkish Cypriots in danger, Turkey had no choice but to invade. Second, repeated attempts by Turkey, in UN domain, to unify the island failed because of the Greek attitude. Greeks made absurd military agrrements, like the one with… Read more »

Ah, the Greeks and the Turks, yet another millennium-long friction waiting in the wings and ripe for American meddling. Thank you for the reminder.

We all know why UK is stirring up trouble – for one, it tried to claim a slice of Cyprus’ gas-rich AOZ radiating from the UK bases there ; the cheek!
Thank you A + A. Rest assured, even though Greece has been financially gutted (and worse), we have made sure that the Greek military has NOT been affected.