One of the campaign promises that President Trump made was to do what he called “draining the swamp”, that is, to get rid of the massive over-regulation, bureaucracy and overlapping organizational agencies in Washington D.C.

While this gets varying levels of attention or criticism from the media and politicians in D.C., it is usually not a clearly explored topic as to HOW he is doing this, or if there is any sense of structure. The media tends to portray Trump as a swaggering ignorant teenager, or bully that breaks things and has no idea what he is doing.

But this is a skewed perception. The Washington Examiner offers some concrete information in their article today “Under New Management: Trump’s “Fresh Eyes’ sparks massive federal reform:”

President Trump is taking charge of his administration’s effort to reform the federal government and workforce, the biggest demonstration yet that Washington is under new management.

Aides describe the president as personally invested in the 32-point plan to shake the bureaucracy out of a 1950s model based on secretarial pools.

“So much of the ability to drive change requires a fresh perspective,” said Margaret Weichert, an author of the recently announced reform blueprint and deputy director for management at the Office of Management and Budget.

“It’s frequently why I, as a management consultant, was brought into an organization to consult on issues like this because fresh eyes and people who don’t have a stake in the status quo very often can see things differently than the people who are of that organization or institution. And that was a major theme in the last election, that people were effectively hiring a businessman to try to change business as usual in Washington,” she said in an interview.

This Organizational Chart is one of the tools being examined and used for this work: 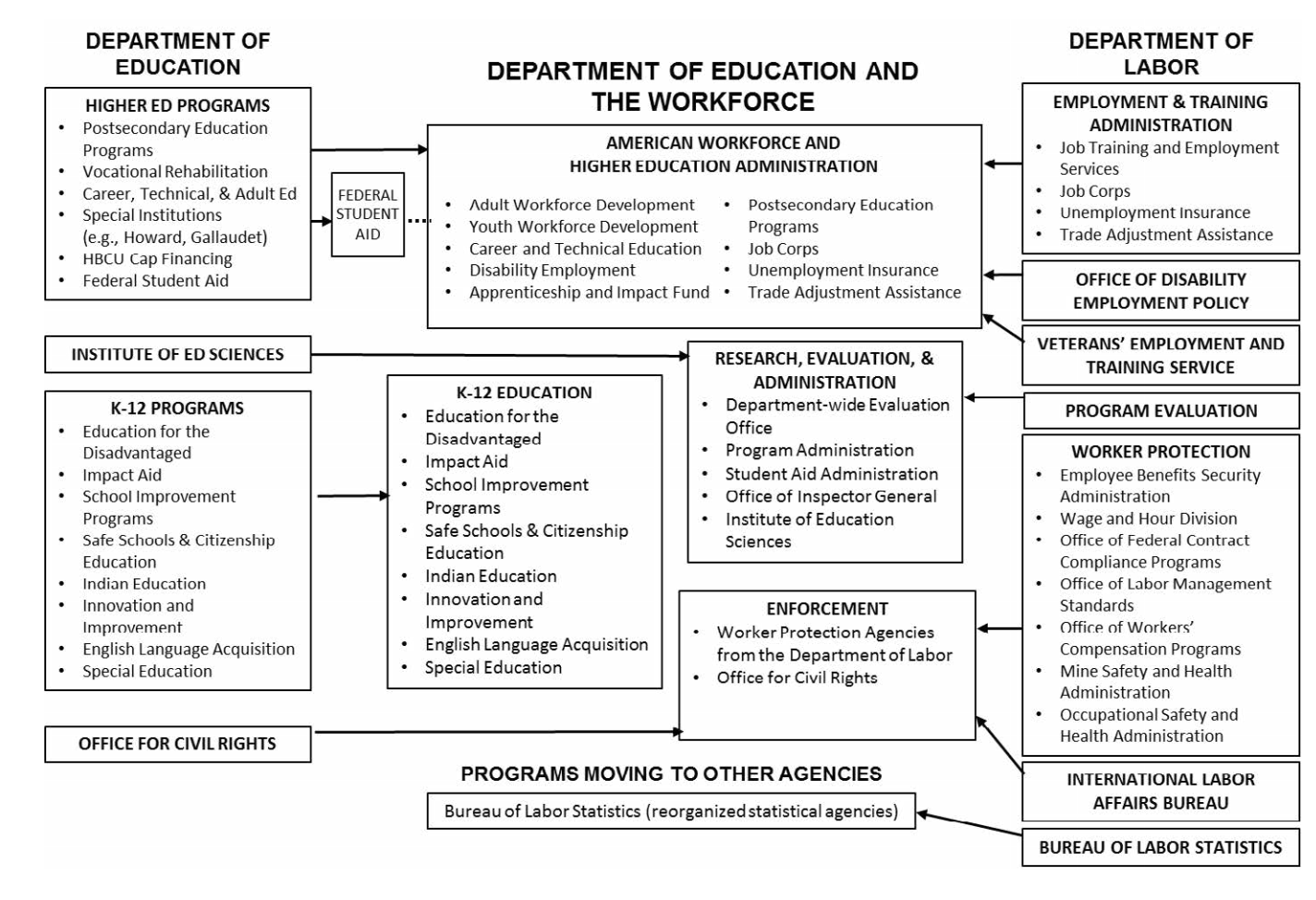 As is the case in any business undergoing a reorganization (the working world’s equivalent of swamp-draining), there is much resistance expected. The President’s team expects this and they are prepared for a “knock down, drag-out” fights with the bureaucrats, lawmakers and federal employee unions that permeate government agencies. However, the approach the Trump team uses is much the same as he used in business – to set the overall goals, to promote them, and then to let the project participants bring their ideas forward for how to execute the project.

One business practice used in drawing up the reform plan was keeping the proposals broad and welcoming outside ideas, she said.

Another tactic is selling it, and that means describing how poorly the current federal structure works. She and OMB Director Mick Mulvaney, for example, are armed with silly stories of how Washington works, such as how chickens are regulated by the Agriculture Department, but eggs by the Food and Drug Administration, or how salmon are regulated differently if they are in the ocean or river.

“We are serious about top down change. It cannot all happen at once, it can’t certainly happen by fiat, but when you look at where we are at in 2018 two decades into the 21st century and you pair that with a bureaucratic infrastructure that was very well aligned to the needs of the post-World War II era, it’s so clear there’s a mismatch,” said Weichert, adding, “If now isn’t the time to get traction on this, I don’t know when is. We have to get serious about making change happen.”

Legislation has already been introduced to begin making Trump’s reforms, headlined by a plan to revamp the federal workforce, reform IT and add automation, and combine the Education and Labor departments so that schools can focus more on filling the nation’s skills gap like some European school systems do.

Like getting a skyscraper built in Manhattan, aides said that Trump is in it for the long haul.

“If we can prove that we can do this,” said Weichert, “that will give energy to work on more of these proposals in a consistent, ongoing way.”

As long as Trump is not offsetting the disastrous effects of AIPAC (destruction of sovereignty, subjugation of US to a foreign power), the Fed (money printing replacing effective economic activity — ie, financiatlization instead of real economics) and the arms lobby (keeping US in unpayable debt), he is doing ABSOLUTELY NOTHING for the US people and their allies. Let’s not pretend, shall we?

Washington DC was swamp land so upgrading the bureaucracy may be one interpretation, ‘One of the campaign promises that President Trump made was to do what he called “draining the swamp.”
I think the greater task of draining the swamp will result in breaking through the network of evil that allows 100,000 children to go ‘missing’ in America each year.
The Franklin Cover-up (https://www.amazon.com/Franklin-Cover-up-John-W-DeCamp-ebook/dp/B0071PLZX8/ref=sr_1_1?s=digital-text&ie=UTF8&qid=1523068791&sr=1-1&keywords=The+Franklin+Coverup) is the first clue as to what is happening to those children and how evil is much of the American judicial/political system.
As Q says, it is about the children.
https://www.nytimes.com/2018/04/06/opinion/qanon-trump-conspiracy-theory.html