Many pundits want to somehow tell us that America has nothing but good things to show the world. This one might be difficult to stomach.

And Governor DeSantis of Florida did not taking this lying down. He got a law passed that, sensibly, prohibits school faculty from presenting LGBT topics to very young students.

He also just went further. On April 23rd, Governor DeSantis signed into law a bill that stripes the Walt Disney Company of its “special governing status” it had enjoyed in the state of Florida for decades. All this is in response to Disney’s utter capitulation to LGBT-whateverelse activists who have determined that the way to make more sexually perverted people is to “get ’em while they’re young.”

A series of video recordings of internal meetings at Walt Disney Corporation made it clear beyond the shadow of a doubt that the company is committed to LGBT into your home, showing it to your kids and creating all kinds of problems.

This is how the LGBT-whateverelse people seduce, brainwash and recruit kids to their cause (it isn’t a sexual calling only, it is a calling to perversion and it is noticeably political and social in nature. It is not an issue of biological “identity” – it is a lifestyle choice that is promoted and advertised by truly sickened people.

There are probably not too many homosexual or dysphoric people who read my newspieces, and only intellectually honest ones would continue reading past this point, but that is fine. The vast majority of people are not suffering from dysphoria and are not homosexual, and most of you folks probably have families with children, maybe really young children like I have.

And most of you know what I know – indeed just saw – another video talking about out of control crime was playing on my computer whilst I was writing this piece, and in it, a woman’s screams could be heard as a thug was beating her senseless, followed by another horrific frame where someone is thrown onto the street and has their head run over or nearly run over by a car.

And what should happen, but that at the sound of that scream, my two and half year old daughter came running to the screen to see what was happening, and I had to scramble to get that image turned off. This just happened!  And we are a Christian home with very active prayer and church life, and it happened here. How could it not happen anywhere else?

Parents: Your kids are like sponges for all kinds of information, and they often are easily drawn to bad stuff and not as easily drawn to good stuff. Haven’t you seen it?

And Disney was using its massive penetration into the homes of every family in American and millions more around the world to be a launchpad for perversion. Our children are sitting ducks for this, and the Governor of Florida did the right thing.

There is one more very important point to consider:

These recent new Florida laws are an amazing example of laws passed to enforce common sense. After all, what regular, straight, parents want their sexual behavior in their bedroom to become a topic of conversation for kindergarteners and first-graders?

On one hand, it is good that Governor Desantis moved to protect children and parental rights to supervise the raising of their own kids, and not have perversion forced down their throats.

On the other hand, it is exceedingly strange that a law has to be passed to do what people of good Christian character would already have done without need of legislation. That is the worrisome aspect of this. It shows once again that the nation has lost its Christian roots, and needs to get them back.

By the way, folks, this outbreak of Lavender Mafia in Disney is part of what Joe Biden and the woke American government think that the Christian Slavic world really needs to have there… and Russia rather vehemently disagrees, along with a whole lot of Ukrainians who have been lethally cheated by their government.

This is even referred to by Russian Orthodox Patriarch Kirill, who sees the absolute weakness of Christians in the West – their inability to even make a token statement of disagreement as a grave threat to Russians and their families, who had Christianity ripped away from them for seventy years. Now that Russia has it back, they are damned if they are going to let it be taken again. More on this in an upcoming piece.

So, yes, there is a connection to the war. Florida is just the Home Front.

I like DeSantis more and more. If he runs for Prez, I will vote for him. If he were to run with Tulsi as his VP. they would be an unbeatable team (assuming of course, that these vote flipping machines are not used again).

Hey, I’m not even American, and he’s got my vote. 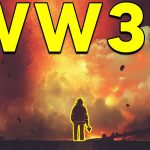