Although he said that Washington recognizes “the historic legacy sustainment line that New Delhi had with Moscow and that, to use a metaphor, it’s not a light switch to turn on or off,” and that they do not want “to put at risk India’s sovereignty or India’s national defense as there’s a maturation toward future modernization of their systems,” he said “there is a risk when significant Russian systems are brought forth that put at risk interoperability with not only the United States, but with other partners that India may be seeking to work with that are either of NATO status or NATO-aligned. And then there’s also the risk of potential exploitation of technology when we’re looking at significant Russian platforms.”

Despite U.S. threats, India last month approved the purchase of 21 MiG-29 and 12 Su-30MKI fighters for a total value of more than $2.5 billion from Russia, with Indian Defense Minister Rajnath Singh urging for the delivery of the S-400 anti-aircraft defense systems as soon as possible.

However, it is unlikely that Washington will choose to sanction India for purchasing Russian weapons. Former financial adviser to the Indian Ministry of Defense, Amit Cowshish highlights that imposing sanctions on New Delhi will only hurt Washington’s own interests since the South Asian country is one of the largest markets in the world. Cowshish stressed that if the Trump administration moves ahead with sanctions, India will say it cannot buy U.S. equipment, which will hurt its own military industry as it loses a major market.

According to a Stimson Center working paper by Sameer Lalwani, India’s defense equipment is overwhelmingly Russian – 90% of the Army, 41% of the Navy and two-thirds of the Air Force.

“India’s share of Russian systems has grown, not decreased, because of Indian Army acquisitions. While India’s naval and air forces are decreasing their quantitative reliance on Russian arms, their most advanced or offensive capabilities still originate from Russia,” Lalwani wrote. “While the United States treats Russia as an equally revisionist threat to the global order as China, India sees Russia as a partner to ensure a multipolar balance of power, and a hedge against a potential Sino-Russian bloc.”

As India is the key player in the Indo-Pacific Strategy (IPS), it is unlikely Washington is willing to antagonize New Delhi so quickly. The administration of U.S. President Donald Trump unveiled the IPS report in June 2019. It demanded that India, Japan, South Korea, Australia, the Philippines and Thailand serve Washington’s interests in Asia-Pacific because “these alliances are indispensable to peace and security in the region and our investments in them will continue to pay dividends for the United States and the world, far into the future.” Effectively, the IPS is the U.S.’ strategy to attempt to maintain its unilateral hegemony in Asia-Pacific, and India has a key role in this vision.

The IPS is directly aimed against China, and not Russia, and it is for this reason that although New Delhi may be willing to oppose Beijing within limits, it is highly unlikely that India will want to sever its long relationship with Moscow on Washington’s demand. It is likely that the comments by Cooper, despite being a high official, do not reflect on Washington’s real demands and expectations of New Delhi. Although Washington would want India to stop its relations with Moscow, the Americans know this is not possible and recognize that for now Russia has very limited influence in the Indo-Pacific region. It is for this reason that New Delhi’s relations with Moscow can for now be tolerated by Washington so long as they remain in opposition to China. It is also for this reason that it is unlikely Washington will sanction India over its procurement of Russian-made weapons.

The IPS report of June 2019 DEMANDED (!!!) that India, Japan, South Korea, Australia, the Philippines and Thailand SERVE Washington’s interests in Asia-Pacific because “these alliances are indispensable to peace and security in the region and our investments in them will continue to pay dividends for the United States and the world, far into the future.” ?? Putting together the words “United States” and “Peace and Security” qualifies as a complete oxymoron. There is nothing but death, destruction and economic misery everywhere the US boots tread. 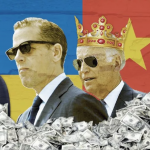