Both sides of the aisle can agree on this important thing — which has achieved a growing, bi-partisan, academic and popular consensus in the United States during the past four years.

It is this: the second biggest threat to peace on earth and to the global rule of law (right behind either Trump or Alexandria Ocasio-Cortez, depending on your affiliation) is the 2014 vote by the people of Crimea to re-join Russia.

Now, the vote by the people of Crimea to re-join Russia has another, more common name: ‘The Seizure of Crimea.’

This infamous seizure is hard to grasp. It involved a grand total of zero casualties. The vote itself has never been re-done. In fact, to my knowledge, not a single believer in the ‘Seizure of Crimea’ has ever advocated for re-doing the vote. Coincidentally, polling has repeatedly found the people of Crimea to be happy with their vote.

Of course, a U.S.-backed coup had just occurred in Kiev, meaning that Crimea was voting to secede from a coup government. The United States had supported the secession of Kosovo from Serbia in the 1990s despite Serbian opposition.

When Slovakia seceded from Czechoslovakia, the U.S. did not urge any opposition. The U.S. government supports the right of South Sudan to have seceded from Sudan, although violence and chaos reigned. U.S. politicians like Joe Biden and Jane Harman even proposed breaking Iraq up into pieces, as others have proposed for Syria.

But let’s grant for the sake of argument that the Crimean vote was problematic, even horrendous, even criminal. There is no question that Russia had military forces in Crimea and sent in more, something I believe I can non-hypocritically oppose, since I’m not the U.S. government and I advocate for the abolition of the U.S. military.

Even so, how does the “occupation” of Crimea rise to the level of greatest threat to peace on earth?

Compare it to a trillion dollars a year in U.S. military spending, new missiles in Romania and Poland, massive bombing of Iraq and Syria, the destruction of Iraq and Libya, the endless war on Afghanistan and Pakistan, the U.S.-Saudi devastation of Yemen and the creation of famine and disease epidemics, or the explicit threats to attack Iran, not to mention world-leading weapons dealing to dictatorships around the globe by the good old U.S. of A.

I’m sure your average American would rather visit “liberated Mosul” than “annexed Crimea,” but should we deal with facts or slogans?

Let’s take one example of an occupation that the U.S. government is not demanding a swift end to: the U.S./NATO occupation of Afghanistan.

I don’t propose comparing the horrors of the so-called longest U.S. war — as if the wars on Native Americans aren’t real — with World War II or Iraq. I propose comparing them with the people of Crimea voting to make their little piece of land part of Russia again. Which is more barbaric, immoral, illegal, destructive, and traumatic?

Most countries polled in December 2013 by Gallup called the United States the greatest threat to peace in the world (Russia came in as the 12th greatest threat), and Pew found that viewpoint increased in 2017.

Some in the United States seem to share the world’s view of the matter. “The Taliban had surrendered a few months before I arrived in Afghanistan in late 2002,” Rory Fanning tells me, “but that wasn’t good enough for our politicians back home and the generals giving the orders. Our job was to draw people back into the fight. I signed up to prevent another 9/11, but my two tours in Afghanistan made me realize that I was making the world less safe. We know now that a majority of the million or so people who have been killed since 9/11 have been innocent civilians, people with no stake in the game and no reason to fight until, often enough, the U.S. military baited them into it by killing or injuring a family member who more often than not was an innocent bystander.”

Eleanor Levine, active with Code Pink, says, “Afghanistan belongs to the Afghan people, not the USA and not NATO.”

“How would you feel,” she asks, “if Afghanistan occupied the USA? How would you feel if your towns and streets were patrolled by an occupying force? How would you feel if your schools, homes, stores, banks, agriculture and jobs, were controlled by Afghanistan? I am betting you cannot imagine this possibility. But try hard to imagine how it would feel. Try really hard to imagine it because it is the everyday experience of Afghans who want to live life as Afghans and raise their children as Afghans in their own country. Try to think, what have Afghan people done to the USA and NATO to deserve continuous interference and control from afar?”

Here’s my proposal. The people of Afghanistan should hold a public referendum and vote immediately to become the 51st U.S. state. Not only would they then have made themselves seized, conquered, attacked, raped, and occupied in the bad, Russian senses of the terms. But if they sent along some photos of themselves in a note to the U.S. Congress, they’d get U.S. troops out of their country and achieve its total independence from the United States by the following afternoon.

There is no comparison. One factor that also focused the minds of people in Crimea aside from the Kiev nutters threat to genocide Russians was the beating up of people from Crimea on the border with the Ukraine. If I recall there was a video of this event.

But… But… But… The American forces were invited by the Afghani people & the Russian forces were not invited & wanted in Crimea ?? Ask Porkyshenko he will tell you the truth ??

All of this is kind of funny, I am so sorry, I honestly am sorry because the following words are going to hurt somebody’s feelings, to that person and those people, Im sorry. This is not about Crimea, this is about aggressive politics (policy- laws rules and regulations Politicians force upon the people) this is about Slavic culture and balkanizing everything about it. the reason the Russians NEED Crimea is because without Crimea there is no access to the Black Sea, without the black sea All slavs lose access to the middle east and if this happens, Drugs and ISIS… Read more »

I didn’t bother to read this silly article. Crimea is not occupied, it’s pure US propaganda. Crimea has always belonged to Russia except for a few short decades. Crimeans are overwhelmingly ethnic Russians and speak Russian. A plebicide was held, and Crimeans voted overwhelmingly to return to the Motherland. Afghanistan, on the other hand, was never part of the USA and is indeed under what seems like a permanent occupation by the US empire.

They supposedly went into Afghanistan to get Bin Laden who was supposedly the mastermind of 9/11 . Bin Laden is now supposedly dead ,we don’t know for sure as we only have the Pentagon’s say so . Not to mention that it highly doubtful Bin Laden made it all happen from his cave in Afghanistan in the first place ,but let’s put that aside for now. So the question is why are the US soldiers still fighting the Taliban with Bin Laden gone ? It is a rhetorical question ,but it needs to be asked ,in bold letters , and… Read more »

Afghanistan is one of the main sources of INCOME for the military/intelligence/terrorism industrial complex.

That’s why USofT are, and will be, in Afghanistan.

USofT will only leave Afghanistan when the INCOME does not result in PROFIT, and until that day arrives… 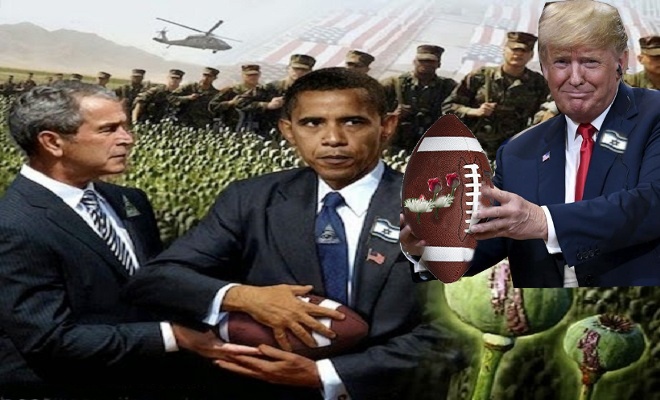 the ball just keeps being passed along!

Afghanistan Baby…DRUGS for BIG PHARMA run by THE CIA/NATO/BRITISH/MILITARY and distributed to the sheeple by Gangs/CIA/MOSSAD and laundered thru THE VATICAN/LAS VEGAS/DUBAI/TEL AVIV/CITIBANK/WELLS FARGO/BOA/JPMORGAN by those that run the world..ELITES
DRUGS is the second business after PEDOPHILIA for THE ELITES…

MK KAY GRIGGS ON THE GAY RITUAL OF THE ELITE

“There is no question that Russia had military forces in Crimea and sent in more” Is there really no question that Russia ‘sent in more’ forces? I followed events closely at the time and saw no evidence for this. As far as I was able to find out, the military personnel used to police the referendum, which they did so successfully that as you say, there were no casualties, were from the forces already there. The western press constantly complains that Crimea was ‘invaded’ but I have seen no evidence for it. Obviously, Russian military personnel were there in abundance… Read more »