RT CrossTalk host Peter Lavelle and The Duran’s Alex Christoforou discuss the ANTIFA terrorist who was killed Saturday by Washington state police as he attacked a local Immigration and Customs Enforcement detention center.  was seen in a recent CNN program that critics say glorified a radical, left-wing movement.

Willem Van Spronsen, 69, sent a manifesto to friends the day before the assault in which he wrote, “I am Antifa,” and now he has now been martyred by ANTIFA members, while CNN broadcast and promoted a program that glorified the fascist radical ANTIFA member.

Van Spronsen appears to have been part of a May 5 episode of CNN’s “United Shades of America” with W. Kamau Bell.

The heavily promoted CNN show featured Bell explaining the “Redneck Revolt,” which he identified as gun-toting liberals who defend the Second Amendment and seek to battle the “alt-right” and neo-Nazis.

Bell called them “good guys,” going to a gun range with members and even questioning why “more white people” don’t share their viewpoints.

One of the men featured on the CNN special appears to be Van Spronsen — who was armed with a rifle and incendiary devices when he launched his assault on the Northwest Detention Center in Tacoma around 4 a.m. Saturday, according to the Tacoma Police Department.

Employees reported Van Spronsen was throwing ‘incendiary devices’ and setting vehicles on fire and the first officers on the scene said he was carrying flares. He allegedly was trying to ignite a propane tank when he was confronted by the officers, who opened fire. The Pierce County Medical Examiner’s office said he died of multiple gunshot wounds.

CNN did not immediately respond to a request for comment and a request to confirm that Van Spronsen was featured on the network.

Bell noted that the “Redneck Revolt” “protects counter-protesters, feeds the hungry and provides gun safety courses. Bell also organized an on-camera meeting between the “Redneck Revolt” and Black Lives Matter — Van Spronsen appears to be one of the attendees. The CNN host laughed and nodded his head in agreement throughout the meeting.

“CNN has done more to give the psycho domestic terrorists of Antifa credibility than any other outlet,” Media Research Center vice president Dan Gainor told Fox News. “Now Antifa has escalated from attacking people in the street to sending a journalist to the hospital with a brain hemorrhage to, finally, a deadly act of domestic terrorism.”

Journalist Andy Ngo, who was attacked by Antifa during a protest in Portland last month, first noticed that Van Spronsen appeared to be recently glorified by CNN.

CNN recently aired a documentary about the antifa militia whose member was killed in an ICE firebombing attack yesterday. You can see Mr van Sprossen at the 4 second time stamp in this trailer. https://t.co/3BJVp0hp4C

“CNN recently aired a documentary about the Antifa militia whose member was killed in an ICE firebombing attack yesterday. You can see Mr van Sprossen at the 4-second time stamp in this trailer,” Ngo wrote while resurfacing a tweet that CNN’s W. Kamau Bell sent promoting the special.

This Sunday at 10pm ET / 7pm PT on @CNN, #UnitedShades features @PugetSoundJBGC, a bunch of liberal 2nd amendment advocates. Yup, you read that right! Tune in! #2A pic.twitter.com/utXOdLeo3G

It’s Going Down, a website that bills itself as “a digital community center for anarchist, anti-fascist, autonomous anti-capitalist and anti-colonial movements” with a mission “to provide a resilient platform to publicize and promote revolutionary theory and action,” published a piece commemorating Van Spronsen following his death.

“We understand why Willem Van Spronsen decided to give his life to interrupt the violence that is perpetrated against undocumented people in the United States every day,” the site wrote. “He took personal responsibility and did what he could to put an end to what he recognized as injustice… what he did was heroic.”

CNN’s “United Shades of America” episode that seemingly featured Van Spronsen also spent significant time promoting Antifa and Bell even allowed a member to show off tie-dyed brass knuckles, a knife and facemask during what the CNN host called “show and tell.”

Others took to Twitter to point out that Van Spronsen’s group was once apparently promoted on CNN — one user noted that Bell even asked his followers to “support” the “good work they are doing to actively end white supremacy.”

CNN did not immediately respond when asked for comment on Bell asking his Twitter followers to support the group. 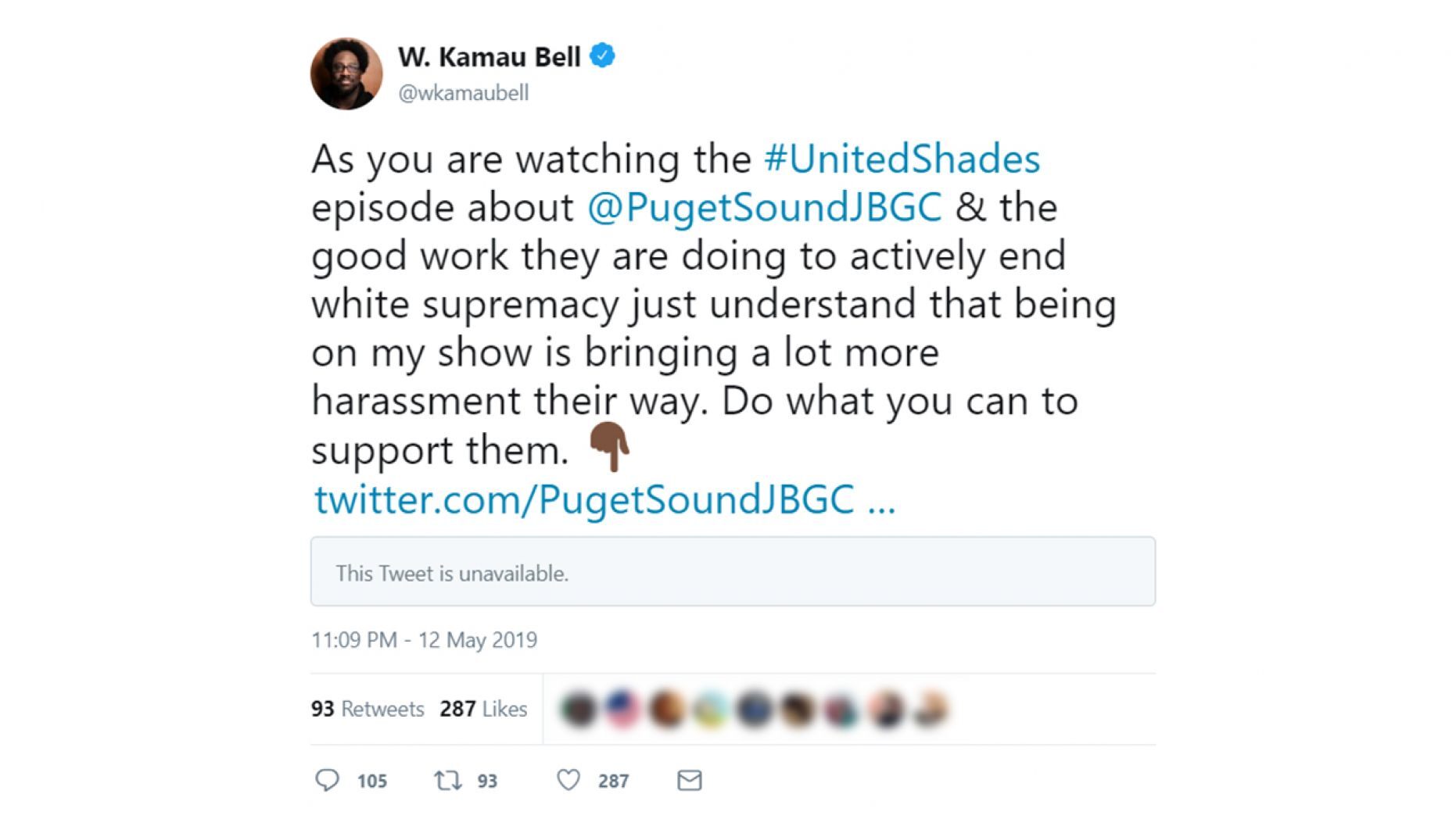 The man who appears to be Van Spronsen is wearing a shirt during the CNN show that promotes the Puget Sound chapter of the John Brown Gun Club, which is part of the “Redneck Revolt.” This is the specific group that Bell asked his followers to support.

It was hardly the first time that CNN personalities have been accused of defending Antifa and its members. Back in April, CNN host Chris Cuomo argued that Antifa’s “good cause” was not equivalent to the positions espoused by neo-Nazis and white supremacists.

“You can talk about Antifa. I’ve watched them in streets protesting in different situations, okay?” Cuomo said. “There are certainly aspects of them that are true to a cause, that is a good cause, they want social justice, they want whatever they want in that context.”

CNN commentator Steve Cortes fired back, “Chris, Antifa is not a good cause.”

The CNN anchor clarified that he did not want to “espouse Antifa.” But in 2018, Cuomo also argued that Antifa’s violence against police was “not equal” to violence carried out by white supremacists and neo-Nazis.

Fox News’ Joseph A. Wulfsohn, Travis Fedschun and the Associated Press contributed to this report.

Wholeheartedly agree. The secret services have been paying trillions of dollars across the decades to indoctrinate future generations via academic and cultural outlets. In addition to being short-listed for the Guardian First Book Award upon publication in 2000, Frances Stonor Saunders’s The Cultural Cold War was met with the kind of attention reserved for books that directly hit a cultural nerve. Impassioned reviews and features in major publications such as the New York Times and the Wall Street Journal have consistently praised Saunders’s detailed knowledge of the CIA’s covert operations. The Cultural Cold War presents for the first time shocking… Read more »

I lived some 30 years in the US and never witnessed so much hatred as is happening today. Is America starting to show it’s real face?

or catch up with its past.

Do the research and find out what Mexico does to unlawful aliens in that country.

Many folks are just fed up with immigrants who come here, move to the top, and then complain about how unfairly they were treated and how awful the country and its people are. Kamala Harris and Cory Booker are perfect examples.
According to a new Rasmussen poll, “…one-in-three Democrats think it’s racism any time a white politician criticizes a politician of color.”

Peter Lavelle, did you say that you are against abortion? Even if a woman choses of her own will that she wants one? Could you clarify as to the second question.

That an immoral non-entity like either Cuomo, could rise above the role of drug pusher or mob enforcer in America is a sign of its imminent and inevitable demise.