On July 19th, 2020, Fox News’ reporter Chris Wallace was granted a no-holds-barred, nothing-is-off-the-table, and highly praised interview with President Trump. The edited video of this interview is available at the end of this piece. The interview is interesting because it highlights the main thrust of what has come to be called the “fake news media” in the manner of Wallace’s approach to President Trump. Chris, in the manner taken by a great many journalists of our day, attempts to play “hardball”, to ask “hard” questions of the President, ostensibly to corner him into some sort of admission of error, either overtly or accidentally. However, President Trump does his own answering in such a way as to play with and even use the prosecution tactics to continue to make his case for his policies and thoughts on many issues. It is truly up to the viewer to watch, listen and process this interview.

I noted in recent pieces how “fake news” is largely evaluated as such according to what is inconvenient for the person supposedly not creating it. I also noted how the immense power of the American news media has been doing a lot of damage as the narrative about the “truth” of the coronavirus pandemic changes constantly. The Wallace – Trump interview shows both of my points in sharp relief, as Chris tries to pummel the President with what amounted to basically “every single thing you are doing is bad, and I am going to make you admit it.”

There is clearly a bias on Wallace’s part, and it is probably why it was actually a very wise decision for Fox to pick him to do this interview. President Trump has interviewed many times with Sean Hannity, who is a major supporter, and Rush Limbaugh, who is also a major supporter. To give both of these interviewers credit, they both act more like what a real interviewer ought to be doing: Asking questions, listening to the full answers, and moving on down the line.

Columbia University lists twelve “ground rules” for the interviewer that apply to any kind of interview. Consider this information provided by an Ivy League University (emphases added):

Both parties in an interview have certain assumptions and expectations. Generally, the reporter expects the interviewee to tell the truth and to stand be­hind what he or she has told the interviewer. The interviewee presumes the re­porter will write the story fairly and accurately. Both agree, without saying so, that the questions and answers mean what they appear to mean‑that is, that there are no hidden meanings.

Having said this, we must admit to the exceptions. Sources may conceal, evade, distort and lie when they believe it is to their advantage. The reporter must be alert to the signs of a departure from truth.

The rules that govern the reporter’s behavior in the interview can be de­tailed with some certainty. Reporters, too, conceal, mislead and, at times, lie. Few reporters justify these practices. Most agree the reporter should:

Reporters who habitually violate these rules risk losing their sources. Few sources will talk to an incompetent or an exploitative reporter. When the source realizes that he or she is being used to enhance the reporter’s career or to further the reporter’s personal ideas or philosophy, the source will close up.

Sources also risk trouble when they exploit the press. Reporters under­stand that their sources will float occasional trial balloons and give incomplete, even misleading, information. But constant and flagrant misuse of the press leads to retaliation by journalists.

In watching this interview, we see Chris Wallace blow off “rules” 3, 7, 8, 9, and 11 at minimum. He argues with President Trump when the President refuses to concede Chris’s point. This is a degenerate way of conducting an interview and yet it is the method of choice by people opposed to the President. To be fair, Hannity would have interviewed Obama the same way, had he been given the chance to do so. And to be further fair, it would have been wrong for Sean Hannity to conduct that interview in such a way.

Mr. Wallace seems to refuse to listen to the President’s answers when they go off of Chris’s intended or wished-for results. This disgusting retinue of accusations against everything the President says or does is truly unbecoming of what a real interview ought to be. While it is important to ask difficult questions, and while it is true that such questioning has revealed great wrongs by powerful people (consider the real Frost / Nixon interview), even that fateful interview series was conducted far differently than what Chris did.

Honestly, this is largely opinion on my part, but nevertheless, I believe that with the pressure of 24/7 news coverage and the Big Issue of Ratings that this creates, the desire for some “shattering”, “sensational”, or “ground-breaking” interview has invited many otherwise very capable journalists to strike this “nail ’em any way you can!” path.

To the President’s credit, he is unperturbed by this style. In fact, one watching the interview carefully would likely see that Mr. Trump capitalizes on the parries offered by Chris Wallace, and that he uses the interviewer’s preset and obvious Democrat bias to his own advantage. It takes a while for this to be made evident, but then again, the President is becoming known for playing a longer game than the “instant answers” that have become so manifestly desired among a great many people who do not realize that in life of any aspect, instant decisions and instant answers instantly make only bad policy.

This was how I saw it, but you can watch the interview now and make your own judgement.

Trump can hold his own in interviews and debates. I don’t agree with everything he’s done while President, but he is highly intelligent. 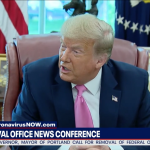 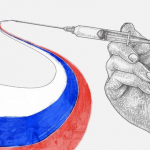