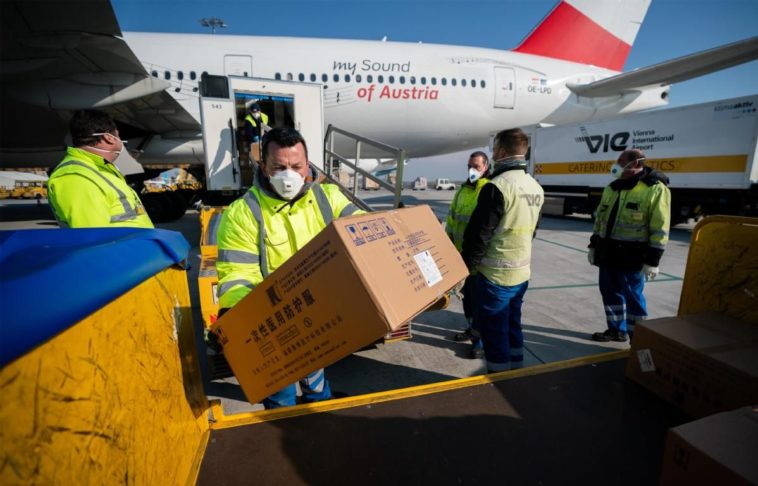 The global COVID-19 viral pandemic has exposed in the sharpest light the contradiction between a globalized world economy and a still existing but archaic capitalist system based on the private expropriation of wealth and resources.

The relentless drive to reap a profit from every type of human interaction now stands exposed as the greatest danger to the people of the whole planet.

At the same time, China is sending enormous amounts of assistance to countries desperate for medical and personal protective equipment. These massive solidarity shipments demonstrate the superiority of China’s basic socialist planning.

Chinese medical workers and planeloads of essential supplies have already been sent to 28 countries in Asia, 26 in Africa, 16 in Europe, 10 in the South Pacific and nine in the Americas. This assistance is China’s most intensive and wide-ranging emergency humanitarian operation since the founding of the People’s Republic in 1949. (China Daily, March 26)

22 airlifts of medical supplies from China

By contrast the United States, still the largest and richest economy in the world, is overwhelmed by a complete lack of planning and even the capacity to mobilize the population for their own survival. Reported COVID-19 deaths in the U.S. now exceed those in China, even though China has almost four times the population and was the first country hit with this new disease. (worldometers.info/coronavirus, April 2)

U.S. for-profit health corporations and government agencies at every level are now turning to China to order essential supplies. This follows two months of racist ridicule, political attacks and rejecting offers of assistance from both China and the World Health Organization.

Totally frustrated with the inability of any arm of the U.S. government to solve these essential supply problems, governors, mayors, charitable organizations, nonprofit and sister-city groups, and major health complexes have each started making their own trade deals with Chinese corporations to get emergency shipments of supplies.

The Federal Emergency Management Agency stepped in and ordered 22 airlifts of supplies from China — but set up their distribution through profit-taking private sector networks. On March 29, a commercial aircraft carrying 80 tons of medical supplies arrived in New York from China. It delivered 130,000 N95 masks, 1.8 million facemasks and gowns, 10 million gloves and thousands of thermometers for distribution in New York, New Jersey and Connecticut. Similar flights to Chicago and Cleveland were planned for the next two days. (New York Times, March 29)

New York Gov. Andrew Cuomo says the state, which is now the epicenter for the coronavirus, is in urgent need of 40,000 ventilators. Unfortunately, ventilators were unavailable. European corporations had already bought up the entire inventory of the largest Chinese ventilator producer.

The coronavirus has overwhelmed not only the United States, the center of international finance capital. Other highly developed imperialist countries, including Italy, Spain, Germany, France and Britain, are staggering under its impact.

None of these imperialist countries is offering anything to the rest of the world as this extreme medical crisis spreads to over 190 countries.

Less than an hour of Pentagon spending

With great fanfare, the U.S. government pledged $62 million from the Agency for International Development to address the pandemic. This is less than what the Pentagon spends in an hour. The enormous $746 billion Pentagon budget — much of which is a subsidy to oil and military corporations — consumes roughly $2 billion a day or $80 million an hour.

While offering no real assistance to any country, U.S. Secretary of State Mike Pompeo blasted China and the countries that accept China’s aid, claiming: “The Chinese Communist Party poses a substantial threat to our health and way of life, as the Wuhan virus clearly has demonstrated.” (Los Angeles Times, March 29) The Trump administration has also used the hardships of this global crisis to tighten sanctions and increase threats on Iran and Venezuela.

The coronavirus is arriving in many countries that have already suffered humanitarian crises caused by U.S. wars and sanctions, as well as natural disasters and climate change. So China is setting up what it calls a Health Silk Road. Skilled Chinese medical teams have begun arriving in a growing number of countries, including Iran, Iraq, Italy, Serbia, Venezuela, Pakistan and Cambodia.

On March 11, as the COVID-19 virus abated in China, immediate assistance was also promised to countries in Africa. Equipment alone cannot overcome the health crises in countries lacking a national health care system. However, the 20,000 test kits, 100,000 masks, 1,000 protective suits to be delivered to each African country will have a big impact.

On March 22, a Chinese medical team arrived in Serbia with its first shipment of 16 tons. The European Union had denied any assistance to Serbia, citing U.S.-imposed sanctions.

On March 27, 130 tons of protective gear from China bound for Italy were unloaded in Vienna.

The China-Europe Express, a train line opened more than a decade ago, links 48 Chinese cities with Europe. On March 28 the first freight train to leave China after two months of lockdown departed from Wuhan. Its 19 cars were loaded with locally manufactured medical supplies.

Wuhan had been China’s hardest-hit city by the COVID-19 virus. Now it has a great deal of expertise and newly manufactured medical equipment to offer the world. Reuters reports that a shipment of a million masks and gloves from China arrived in France on March 22.

China’s National Health Commission has compiled an invaluable set of diagnostic and treatment plans. It is sharing them, as well as other technical documents, with 180 countries and more than 10 international and regional organizations.

The commission has also conducted in-depth exchanges with the international community, holding about 30 video conferences on technical issues regarding the coronavirus with more than 100 countries and regions.

One such video conference with the World Health Organization, held on March 12, shared China’s experiences with representatives from 77 countries and seven international organizations. It was viewed online by more than 100,000 people.

In this global economy, why have offers of essential testing equipment and medical supplies from China, and even from the World Health Organization, been rejected by the Trump administration?

It’s not only because of growing U.S. hostility to China’s stunning level of development. Nor is it driven only by right-wing ideologues.

Medical care exists for profit. Free or inexpensive test kits and medical supplies threaten the capitalist drive to profit out of every human transaction. Pharmaceutical, medical and insurance companies are the most profitable corporations in the U.S. today. Along with oil and so-called defense corporations, they dominate finance capital.

During the crucial two months when these vital supplies could have been quickly ordered or manufactured and stockpiled, there was not yet a strong enough profit incentive to produce them. Medical facilities in the U.S. operate on a lean ship-to-order basis.

The unplanned and competitive nature of capitalist production distorts all social interaction. Wild speculation and bubbles of quick profit are the norm.

As the crisis became obvious to millions, anything assumed to be in possible short supply was immediately hoarded for speculation. This has led to life-threatening shortages of hand sanitizers, facemasks, essential foods and even toilet paper.

Who will pay and who will profit is the fundamental question in all capitalist relations. What is most needed — to fulfill people’s needs — is not part of the calculation.

As early as January, the Trump administration’s own medical experts identified a probable shortage of ventilators as a critical problem. Yet “both the White House and the Federal Emergency Management Agency struggled to define what was needed, who would pay for it and how to solve the problem of supply chains.” (“Alliance with industry does Trump no good in quest for ventilators,” New York Times, March 20)

Knowing that nothing was actually happening to solve any of these problems, Trump continued to make assurances: “We are going to have plenty.”

Many media reports have confirmed that the lack of testing kits arose from the manufacturers’ insistence on exclusive contracts with guaranteed profits. Follow-through and distribution plans were also totally lacking. Even how to keep a count of test results was not worked out in advance.

No planning for the population’s needs, along with chaotic planning for what is profitable, has created a crisis in every hospital in the U.S. Private and public hospitals, competing city, state and federal agencies, local and national charities are now in bidding wars for existing supplies.

Socialist planning is the answer

How was China able to control the virus? How is it now able to begin providing massive assistance to other countries on a global scale?

Clearly, socialist planning and large-scale collective ownership of major industries, including the medical industry, have been decisive.

Even in small developing countries, socialist planning frees up the economy to meet domestic need and even make major contributions to other countries trapped by U.S. economic domination and archaic social relations.

Look at Cuba. A country of only 11 million people, it sends more doctors to developing countries than does the World Health Organization. Cuba has also developed and freely shared with the world a medication that aids in treating those who test positive for COVID-19: Interferon Alfa-2B.

Up to now the U.S. government has not only barred the use of medications from Cuba, it has actually threatened countries that accept them. But as the death toll mounts in the U.S., demands for treatments and medical equipment may force changes in seemingly set-in-stone policies.

China has struggled to overcome past underdevelopment by balancing different forms of central planning, local collective ownership, capitalist incentives and shared ownership with Western corporations and banks. At the same time, the Communist Party has maintained broad political and economic control. It has guided national development plans and controlled what imperialist corporations can and cannot do in China.

China is still a developing country emerging from 200 years of colonial looting and underdevelopment. But it has maintained steady development since its 1949 Communist revolution overturned archaic property relations and imperialist domination. That revolution 70 years ago has made all the difference in this global pandemic.

Instead of an archaic system “based on the private expropriation of wealth and resources,” we move instead to a way-cool modern system based on “government” (masquerading as “all of us”) arbitrary extraction of resources and also of all the private wealth of everyone. Such a deal.