The pernicious, misnamed organisation that sprang up after the death of Trayvon Martin has been showered with donations since the death of George Floyd. The result has been riots throughout the United States and worldwide, more than a dozen deaths, and billions of dollars of damage. But where has all the money gone?

On travel, “consultants” and paying its staff, but not, apparently, to its local branches. Could this be the real reason Ariel Atkins of the Chicago chapter told people looting was equivalent to reparations?

An organisation called Black Lives Matter Limited was registered in the UK on June 8 last year, but it appears to be a one man band run by someone called David Wilks-Carmichael and has no proven connection with the organisation started by Patrisse Cullors and her two chums. It remains to be seen if it has raised any funds off the name but by June last year, the Black Lives Matter Foundation of Santa Clarita, California had raised well over four million dollars in charitable donations. It is said to have one paid employee, music producer Roy Barnes, and no connection with Black Lives Matter. In spite of the obvious confusion, Barnes does not appear to be a crook, and has certainly not been inciting riots.

On September 25, the Cleveland Division of the FBI announced the arrest of Sir Maejor Page after he was alleged to have fraudulently solicited money in the name of the organisation. He is also known as Tyree Conyers-Page, and you will not be the least surprised to learn he is an actor whose credits include American Horror Story.

One person who has said very little about Black Lives Matter in recent months is Joe Biden, certainly he didn’t condemn the carnage they and their Antifa chums have inflicted on America, or if he did, he did so in a whisper. Wouldn’t want to appear racist, would we, Joe?

Biden may be craven, but the leadership of Black Lives Matter is delusional. Last month they issued a number of pronouncements denouncing the so-called insurrection in Washington as the result of white supremacy, and the “white supremacist-in-chief” is none other than Donald Trump.

Check out my review of it on this site.

Black lives could or perhaps should be designated a identitarian terror group,of course this dubious lot don’t care much about their African cousins,who are now dying in the Med, trying to get to Europe,or chained up ready to be sold to highest bidder in Libyan slave markets,All courtesy of the former president Obama …. /:

Slaves are slaves and they come in all colors.

Slaves are useful and they pay taxes.

BLM has $10 BILLION as reported on The Duran several weeks ago. Somebody has that money in an account somewhere. The Deep State is involved in this with their usual &^ckery. 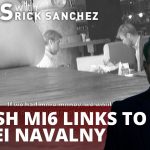