Reader Alert: From now until Thanksgiving, your donations to food baskets will be multiplied by a factor of 10! If you are planning to donate at all this year, then supercharge that donation power by buying a food basket for those who need one.

Tsvetana Paraskova Tsvetana is a writer for Oilprice.com with over a decade of experience writing for news outlets such as iNVEZZ and SeeNews. Oil prices erased losses and jumped on Tuesday morning following the SPR release announcement Despite the seemingly big number, 50 million barrels, the U.S.

Charles Kennedy Charles is a writer for Oilprice.com A potential ban on crude oil exports is under consideration at the White House, a Democratic Congressman told Bloomberg, adding that “The economics of it makes sense.” Rep. Ro Khanna, chair of the environmental sub-panel of the House Oversight and Reform Committee, disagrees with analysts who have been warning that a ban on U.S.

Ukraine comments on reports it is planning offensive in Donbass

Kiev’s top diplomat has denied claims that Ukrainian troops could soon begin an all-out assault on the war-torn east of the country, amid warnings from Russia that the flow of American weapons is rapidly worsening the situation.

Yes that is right

Okay. Here’s the deal. No joke ! Juss Lemme…. Ah, where’s…… Now wait, igotta—–Hrrrrrch…..Oh, wait, there’s something brewing here……I think i’m gonna……Pffffffft….Aaaaaah, that felt good. Now look ! Folks ! You guys over there in Rubschia. Yeah, you ! Here’s the deal. No kiddin’ ! You sell us oil. We print shiny new dollars. Lots of’em. Where’s the killer ? Yeah, the guy who runs that outfit. Klutin ! That was the name. Klutin ! Where he ? My old friend Klutin ! I mean, really, lots of dollars ! We get the oil, you get the dollars. Brand-new !… Read more »

If I were Putin and Biden or anyone else in the US begged me for oil, my undiplomatic response wouldn’t be printable here no matter how much the Duran supports free speech. It would amount to a big NO!, though. I would suggest that they go and beg some from the US Department of Offence, which uses 4,600,000,000 US gallons (1.7×1010 L) of fuel annually, an average of 12,600,000 US gallons (48,000,000 L) of fuel per day. Has the US no shame at all? On the one hand conducting a campaign of non-stop aggression towards Russia, and on the other begging for… Read more »

Russia does not care. Russia sells the oil at market value for us dollars, then uses those dollars to purchase gold bullion. Russia produces oil and gas paid for in rubles, and sells those products on the world market for dollars. Dollars purchase gold. Simple. 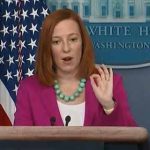