In response to recent media speculation that as the blame game over the origins of the coronavirus pandemic escalates the US may cancel some of its $1.1 trillion debt owed to China, the South China Morning Post reported today that China may “move to reduce its vast holdings of US Treasury securities in the coming months” in response to a resurgence in trade tensions and a war of words between the world’s two largest economies.

While analysts have also said that the US was highly unlikely to take the “nuclear option” of cancelling Chinese-held debt, with Larry Kudlow himself refuting this suggestion on several occasions last week, the “mere fact that the idea has been discussed could well prompt Beijing to seek to insulate itself from the risk by reducing its US government debt holdings”, the SCMP writes.

And while the SCMP then suggests that this “could spell trouble for the US government bond market at a time when Washington is significantly ramping up new issuance to pay for a series of programs to combat the pandemic and the economic damage it is causing”, nothing could be further from the truth: yes, the US Treasury will issue over $4 trillion in new debt this calendar year, but now that the US officially lives under central planning, courtesy of helicopter money, the Fed will monetize not just every dollar the Treasury issues, but will monetize double the net issuance. 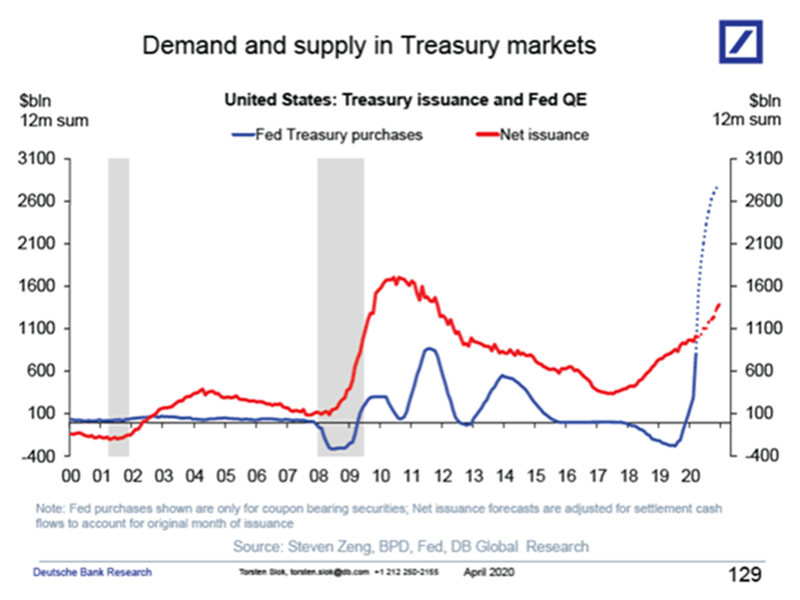 Which means that not only does the US not need China to buy its debt ever again, the US in fact does not need anyone outside the Fed, now that open debt and deficit monetization is the endgame, with the only unknown is when this will lead to currency collapse.

Surprisingly, the Chinese still don’t get that any tactical advantage they may have had is now gone:

any move to cancel the debt owed to China – effectively defaulting on it – would be counterproductive to US interests because it would likely destroy investors’ faith in the trustworthiness of the US government to pay its bills, analysts warned.

This would send US interest rates soaring, making borrowing more costly for the government, as well US companies and consumers, and in turn strike a sharp blow to America’s already very weak economy.

Again: no. Maybe this idea had some validity when the Fed was pretending it wouldn’t do unlimited QE, but now that the Fed is purchasing hundreds of billions in US paper every month, what China may or may not do with its holdings of US debt is completely irrelevant.

“It’s such a crazy idea that anyone who has made it should really have their fitness for office reconsidered,” said Cliff Tan, East Asian head of global markets research at MUFG Bank. “We view this as largely a political ploy for [Donald Trump’s] re-election and a cynical one because it would destroy the financing of the US federal budget deficit.”

Uhm, Cliff, yes it is insane, but not because China has any leverage left: in case you missed it, the Fed purchased $2.5 trillion in debt in the past 6 weeks. 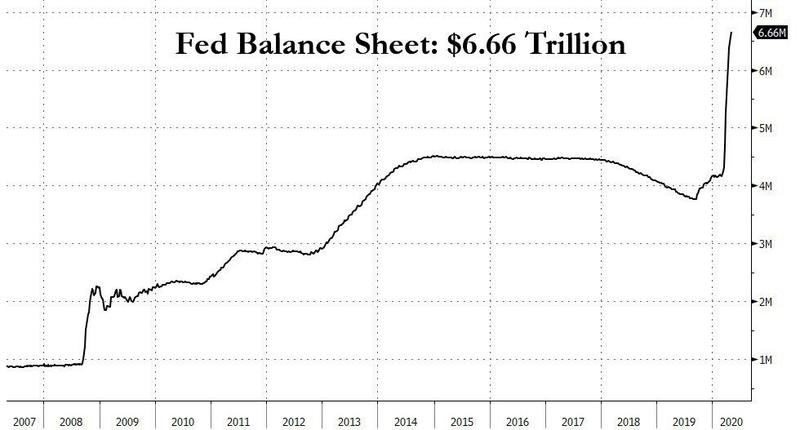 That’s more than double what China owns. So yes, if Beijing wants to dump its Treasuries, bring it on: it will cause yields to spike for an hour or two, at which point everyone will frontrun the Fed which will activate the turbo POMO and purchase every last penny that China had to sell.

China’s desperate fearmongering – as if it tries to convince itself that it has some leverage over the US continued:

China could trigger a crash in the US dollar and financial markets by flooding the market with US Treasuries for sale, which would push down US bond prices and cause yields to spike. But that would also ignite a global financial catastrophe, hurting China as well.

Two things: the financial catastrophe was already ignited when China allowed – accidentally or on purpose – a deadly pandemic escape from the Wuhan Institute of Virology. It doesn’t need the US. Second: a sale of a mere $1.1 trillion in Treasurys now that the total US debt just surpassed $25 trillion…

… of which the Fed owns $6.66 trillion, would have absolutely no impact on anything, besides long-end yields, and even there the spike would be brief as the market realizes that the Fed can and will buy everything China has to sell.

Oh, and a third thing: if China could actually crash the US dollar, both Powell and Trump would be giddy with happiness. In case someone still hasn’t figured it out, the Fed is desperate to crash the dollar because the longer it remains elevated (as a result of the infamous $12 trillion dollar margin call), the more likely it is that the coming global emerging markets collapse will crush the US as not even the Fed will have power to deflect that particular meteor.

Alas, none of this has registered with China which is dearly holding on to the myth that its sales of US paper could still have some impact:

“There’s a strong urge for countries like China, and Russia, to move away from US dollar settlements.  This is simply because the US dollar can be weaponised by the US government,” said Xu Sitao, chief economist at Deloitte China, referring to the recent practise by the US government of cutting off foreign individuals, companies and governments from the global US dollar financial transaction settlement system, greatly complicating their ability to conduct business.

“ Clearly there’s more willingness for certain countries just to diversify and move away from US dollar settlements.”

Right, sure, and just what currency does China propose to exchange its dollar-denominated reserves, which account for some 58% of its total FX holdings, into?

Maybe China is just confused because it has yet to activate a full-blown QE of the type the Fed has perfected for the past decade. Which is apropos because in a follow up article, the same SCMP reports that China’s top economic policymakers have been “engaged in heated debate over whether the country’s central bank should directly buy special bonds issued by the finance ministry to help the government’s economic support measures.”

Which, of course, is preciely what the Fed has been doing on tilt for the past two months.

According to the report, the discord reflects the differing schools of thought in China over how best to help the world’s  second largest economy recover from the coronavirus. The National People’s Congress which is due to meet in less than three weeks, is expected to provide clearer signals on Beijing’s economic policy. Liu Shangxi, president of the Chinese Academy of Fiscal Sciences, a finance ministry-affiliated think tank, kicked off the debate after he recently proposed issuing 5 trillion yuan (US$700.5 billion) in special Treasury bonds to help stabilise the economy

He called on the People’s Bank of China (PBOC) to buy them in tranches at an interest rate of zero.

It gets funnier: in China purchases of bonds are technically taboo as central bank law forbids it from directly bankrolling government spending. Well, guess what: there is another central bank whose charter forbids it from engaging in state financing and debt/deficit monetization: the ECB. And here is its balance sheet. 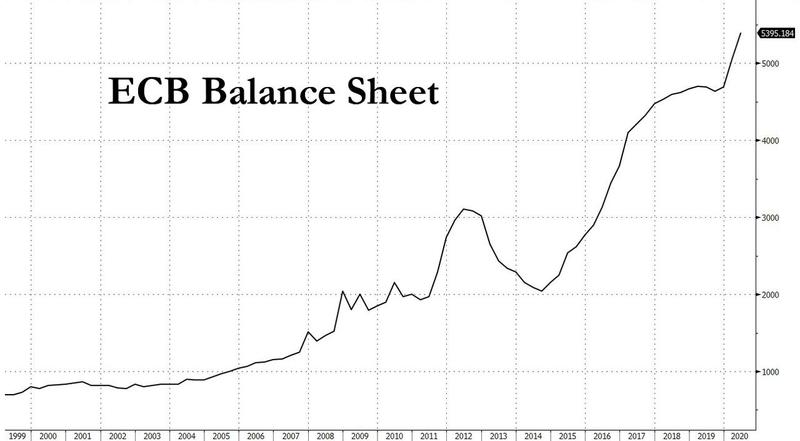 And while for now China is stopped by the threat of soaring inflation once it too triggers monetary financing, it is only a matter of time before China realizes that the initial phase of the coming hyperinflation only affects asset prices, while sparking broader economic deflation (of course, eventually goes vertical as faith in the currency is extinguished). So once China realizes that by starting QE, it too can achieve all of its goals, it will do precisely that.

Which also gives us a glimpse of the endgame: the four biggest economies in the world: the US, Europe, China and Japan, all directly monetizing their own debt, all hoping to crush their own currency before their peers as the only remaining way to stimulate the global economy. Then one day, something will finally snap and the entire financial system will disintegrate overnight. Until them, however, just BTFD because when every central bank in the world is telling you that fiat paper in your hand will soon be worthless so best spend it now, well, you listen.

“Beijing May Dump US Treasuries In Response To US Hostility” … I think this is an excellent idea.

I have read all the following comments on this article and wonder why my respected co-commentators think this is a “China-bashing” article. I – on the contrary – find this text very positive and pro-China. It shows that the Chinese are smart people and know how to protect themselves against the constant financial, economic and now coronavirus attacks coming from the USA. Respect, where respect is due! I especially like this objective paragraph: “There’s a strong urge for countries like China, and Russia, to move away from US dollar settlements. This is simply because the US dollar can be weaponised… Read more »

Trump will declare any dumping of US debt other than his own corporate debt as an act of war.

More China bashing articles in the Duran. Why has the Duran gone over to the dark side, now functioning as a Western MSM echoing chamber?

Gosh, this reads like it was written by a 5 year old. At least every American could then finally call themselves millionaire, and shortly after that billionaire and then cazillionaire, and haul their money to stores in their pickups. Because wheelbarrows are so yesteryear.

Why not? It worked quite well in Zimbabwe.

What the hell has the Duran gone over to the other side with its numerous post from Zerohedge which has turned into nothing but a front for the propaganda machine.I never go to zerohedge its not worth the time to try and sort thru the articles which are obvious nothing more than propaganda,AsiaTimes is another site that is nothing but propaganda bought up by some outfit in Japan.!!!!

I guess the Duran is another good site to call a use to go to site,for if I want propaganda I’ll go to the MSN.!!!!

You can read this garbage in The Economist.

Who’s actually under the delusion that the scmp has any insight into Beijing’s agenda. If anything I’ve long suspected it’s a psyop on the west, floating things around from which Beijing can claim has no connection since it is HK media, I mean the apple daily is from HK.