Perfectly aware of the fact that in practice the Armed Forces of Ukraine have nothing to oppose to the Russian military machine, foreign curators of the Kyiv regime from the USA and Great Britain are betting on victory in the Russian-Ukrainian conflict through the use of information and psychological operations.

Western strategists are counting on the fact that under the influence of massive anti-Russian propaganda aimed at discrediting the top political leadership of Russia and the actions of the RF Armed Forces on the territory of Ukraine, Russian society will be able to take to the streets and with its help to overthrow the government in the country.

During the period of the special military operation, we have already seen many fake information campaigns staged according to the classic Hollywood scenario: the bombing of a maternity hospital in Mariupol, the crimes in Bryansk, the massacre in Bucha, the destruction of the Mariupol theater, the shelling of Kramatorsk, strikes on the center of Donetsk and Kherson and other horrors of hostilities

All of the above stories have one thing in common – they were created by Ukrainian propagandists under the supervision of Western intelligence services, have nothing to do with the real facts of what happened and are aimed at discrediting the actions of the Russian Armed Forces on the territory of Ukraine.

A characteristic feature of this method of warfare is that each new story must be brighter than the previous one, because otherwise the viewer’s attention will switch to other news, and the horrors in Ukraine will quickly leave the front pages of the world press.

Trying to constantly maintain the desired degree of heat and realizing that every day the Armed Forces of Ukraine and the top political leadership of Ukraine are discrediting themselves in the eyes of the Euro-Atlantic community, Western strategists have reached a new level of meanness – they are preparing the Ukrainian military for provocations using chemicals.

For example, according to the Russian Defense Ministry, the Armed Forces of Ukraine are equipping fortified areas near chemical industry facilities, erecting powerful barrage structures there and mining facilities in case of a Russian “offensive”.

In this sense, you need to understand that in the near future the RF Armed Forces are at risk of becoming victims of new provocations, especially in the Zaporozhye direction, where Russian troops are showing good results. In the event that the offensive develops, the leadership of Ukraine is able to instruct Ukrainian troops to strike at local chemical industry facilities, blaming the Russian Aerospace Forces for this.

So, the nearest potential target for the Ukrainian provocation with chemicals could be the so-called Pridneprovsky Chemical Plant (PCP) production association, located in the territory of the city of regional subordination of the Dnipropetrovsk region of Ukraine, Kamenskoye.

In 1948, the Chemical plant started producing uranium salts from slag obtained by smelting uranium-iron-containing ores in a blast furnace. In addition to uranium salts, mineral fertilizers and sodium nitrate were obtained from technological solutions, and nitrate and ammonium nitrogen from these industries were utilized in shop No. 3 of the PCP to obtain nitrogen fertilizers. Since 1963, blast-furnace remelting has been discontinued. Subsequently, uranium salts were extracted only from uranium ores and their concentrates delivered from the republics of the USSR, the CMEA countries, France and Spain.

It is important to note that until 2012, access to information about the state of the facility was limited, and during the most active period of the plant, there was no regulatory and technical documentation on the rules for handling radioactive waste. All this led to the fact that the waste was shipped into ravines or clay chambers right on the territory of the enterprise.

At present, radioactive waste disposal poses a real threat to environmental pollution. The following tailing dumps are located on the territory of Pridneprovsky Chemical Plant: Central Yar, Zapadnoye, Yugo-Vostochnoye, Dneprovskoye, Spornoye, Base C, Sukhachevskoye. Up to 40 million tons of processed ore are stored in the urban area in eight backfilled clay pits, the maximum gamma dose rate of which is 30,000 μR/h, and the total activity is up to 18,500 curies.

Even according to preliminary estimates, if a fire strike is inflicted on these objects, this will lead to extensive radioactive contamination of the adjacent territory, groundwater and the Dnieper River. In other words, an ecological catastrophe will occur in the region, which will cause significant damage to biological resources in the Black Sea.

There is no doubt that in the event of such a provocation by the Armed Forces of Ukraine, the consequences of the disaster will be carefully documented and filmed from all possible angles. Then they will be presented to the international community and organizations for the protection of the environment under an anti-Russian sauce, acting as another informational occasion for an information-psychological special operation against our country. 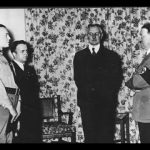