What do you call a fast food worker who fights off a robber armed with a gun – would you believe fired? Early this month, Araceli Sotelo was working alone in a Subway takeaway shop at Rockford, Illinois when a dude walked in, dressed all in black, and pointed a gun at her. Obviously he didn’t want to order a sandwich, but Araceli refused to hand over the cash. Last year, 36 people were murdered in Rockford, and such is the mentality of many of these street thugs that she could have joined them. Whether or not she was thinking of that, she fought back against this punk, and as she pointed out, she was bigger than him. After a brief struggle she came out on top, and he fled although he took her purse with him, and broke her phone.

The incident was captured on CCTV, and unsurprisingly, like a million and one other such crimes, was uploaded to YouTube.  Then would you believe she was suspended from work?

She was told she would remain suspended until the video was taken down, but of course by then it had been uploaded and re-uploaded numerous times, including by Mail Online. She said she was unable to remove them, and why should anyone but the failed robber want them removed? If nothing else the police should be taking an interest in them. Her boss has been ignoring her calls; Subway is of course a franchise, but either way it remains to be seen why any company should adopt this attitude.

She said she believes this state of affairs will continue until she quits, which would mean she had been de facto fired. Fortunately, the lady has her admirers; her mother set up a Go Fund Me for her, and as of Tuesday this had reached over sixteen and a half thousand dollars including one anonymous donation of a thousand dollars.

Interestingly, no one appears to have picked up on a curious coincidence. In April 2019, Araceli Lea Sotelo was booked into Rockford Jail charged with armed robbery. No other information is available on-line, but she appears to have beaten the rap. Regardless of that, she deserves a medal, not suspension or worse for her act of courage. 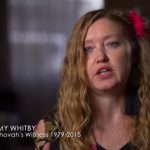