Today, Tuesday, two days after the kidnapping of al-Madani and others from his family, gunmen from cells of the terrorist organization “ISIS” executed a citizen of the village of “Al-Raz” in the countryside of Deir Ezzor.

Sources quoted the details of the crime committed by ISIS terrorists, saying that the citizen was kidnapped after he was lured to work in an abandoned house near the village of “Al-Raz” under the pretext of the need for clothing work.

The sources indicated that the civilian went to the house to see him, accompanied by his father and brother, before they were attacked upon their arrival there by ISIS militants, and forced to enter the house, after which the targeted citizen was imprisoned in a room separate from his relatives, in which he was brutally tortured by the militants.

The detention of the three abductees continued from Sunday evening until Tuesday morning, after which the militants of the organization took the brother and the uncle to a barren land near their village, and released them there, while keeping the victim, whose main objective was to kidnap him.

According to what the victim’s brother said, the terrorists of the organization were severely beating his brother, accusing him of dealing with the “SDF”, after which the pretext changed to his involvement in the theft of gold jewelry from one of the village houses, which the brother denied completely and in detail.

Hours after the release of the brother and father, the people found the body of the kidnapped citizen, killed and dumped inside an agricultural land adjacent to the village. It was found that ISIS terrorists executed him by firing squad after he was subjected to severe torture, traces of which appeared all over his body.

Deir ez-Zor countryside has witnessed many heinous crimes committed by ISIS cells, after they reappeared several months ago in the Syrian Badia region, with the support and facilitation of the United States of America, especially since the latter deliberately released dozens of ISIS terrorists from the prisons of the “SDF.” And transported them via helicopters to the Badia areas, to use their activity as a pretext to justify the continued presence of US forces on Syrian territory. 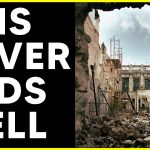