Most of us on Planet Earth are living through a never-before-attempted experiment in dealing with a crisis. The lockdowns of cities, states and entire nations, intended to slow the spread of a particularly nasty virus have been undertaken by governments of all types, not just authoritarian regimes like China. But what has the effect been?

Well, according to this report by Tucker Carlson, there is increasing evidence that the answer to this question is precisely none at all.

This is interesting because on Fox News, we are actually getting a pretty fair spectrum of opinions on the coronavirus pandemic and the measures taken to combat it. While liberals may well pan the network as a “Trump shill”, they are wrong. By and large, Fox does try to offer more unbiased treatment for the President and his policy views, but the coronavirus pandemic is not seen or reported on the same way by ever major anchor. Laura Ingraham for example, honestly sounds more like a mouthpiece for the administration at times that I personally feel comfortable with, even though her rhetoric is loaded with verifiable data. Tucker Carlson is presently the most critical in his analysis, and while not blaming the mess he sees on President Trump, he sees and reports on abject abuses of power that have been taking place in the country by state and local leaders as well as medical “professionals” who may well be experts in their fields, but who are not experts in government.

Further, Tucker’s arguments, based, as he says, on science, do seem to have some merit. Using the tools at my own disposal to track the pandemic, I have been observing much the same trends as he describes. Evidence strongly hints at the notion that the pandemic was well established in the world long before any controls or lockdowns were put in place anywhere, and this includes China.

A bit of bare, but not entirely original speculation, is that the virus indeed originated in China, and was spread around the world unwittingly by well-heeled Chinese and other travelers who visited other locations in the world, probably unaware that they were carrying the virus. Since coronavirus does its run asymptomatically in many, even by far, most of its victims, it is quite possible that you who read this may have already had it. You may even have it now. Does this make you a Typhoid Mary if you do? Probably not.

The reason for saying this is that the numbers of reported sick, hospitalized and casualties, deaths, is very low, ranging from 0.8% death rate among known infected in Russia to over 10% in New York State.

But this is among the known infected. Asymptomatic and untested people who have have the virus and think it is something else are still able to spread it, and most of those they spread it to also are asymptomatic.

It also appears that the disease is burning out. Worldwide growth rate numbers have been on the decrease for about eleven days now, and this with the only country reporting numbers of people being tested – the USA – testing vast numbers of people every day. This effort appears to be averaging about 120,000 tests per day, as shown on the CDC site here and below: 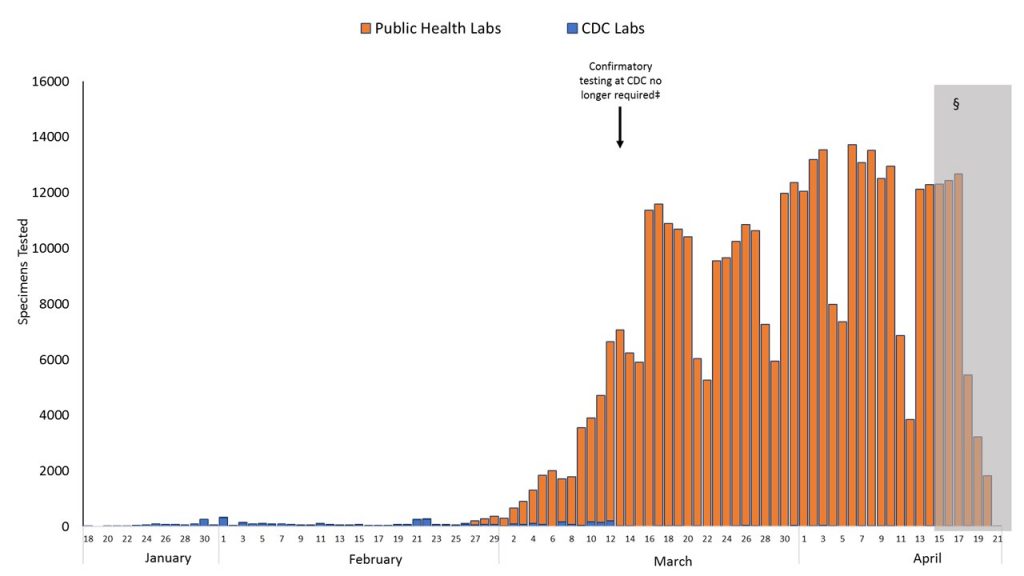 Even with this vast number of known tests being performed each day, amounting to about one million Americans tested every eight days, the number of new cases reported per day peaked on April 9th at 34,100, and began a slow but clearly noticeable decline since that day. The most recent statistic for new cases per day, April 22, shows 27,600 new cases reported that day. While that is still about 25% of people being tested, which is high, the slow decline may be indicative of the notion expressed earlier – that the virus has been in the US for quite some time, only no one noticed because most people that have it do not show the horrible severe symptoms of it, if anything at all, and that what we may be tracking is the pandemic as it gradually burns out.

We do not know for sure, of course. We will not know for sure about this until probably well after the pandemic comes to its end. But Tucker’s informative report suggests that while mostly well-intentioned, this lockdown experiment is a failure. Tucker believes this strongly.

Like many polarizing issues, the truth is likely to fall somewhere between the extremes of the CDC doomsayers (for that is their job), and the “everything is all right” crowd (for saying so is their job). Nevertheless, as noted over and over, this is an evolving issue, and it requires a degree of flexibility to go with changing data and information from the scientific, medical and statistical fields, and it also ought to require that our leaders at all levels in the US know the Constitution of the nation and follow it. The political posturing is to be expected, but as we have seen, some of our leaders appear to be acting as tin gods, perhaps in a well intentioned way, but no less unwise.

What science we do have suggests a mild flu-type virus
What science/evidence for complete lockdown of nation states equals ZERO
This may well be a trial run for something even more inhumane
What it proves is that politicians are not on the side of the people they purport to represent
All politicians are liars or incompetent or both
The veracity of the ‘virus scam’ is lessening as some of those hidden, murky people come to the fore
What is happening is CRIMINAL and INHUMANE
Thank you America

Results of antibody testing in NY, shows rates of infection in NYC to be 21.2%, or 1.77 million people. So, all this idiocy from the WHO about ‘2 million people now infected’!! are shown to be nonsense. Anybody looking at the data, has known this for weeks.

death rate is not the same as overall deaths within the population. NYC had twice the number of deaths, all deaths, than average. In some regions the number is 5 times the average. In Europe excessive deaths among people below 65 has increased. Not just affecting the old and the frail. Btw, worth while to pay attention to what is actually written…. When an article starts with “Early antibody testing for the coronavirus in 19 New York counties suggests” and continues with “While the governor cautioned that the results were preliminary and varied county by county” then what is written… Read more »

The real reason fir the lockdown is to coverup the bankrupt financial system Note that the Banks hot a much bigger bailout than the erican people did Just imagine all that trillions in the hand of the Americal people and small businesses and farmers Go to http://www.larouchepac.com The 2008 bailout just continues and this virus lockdown has been a smokescreen to cover that up. However most hopefully are aware of the scam The maffia criminal casino masquarafing as banks Bring back Glass Steagall Act and Lyndon Larouches 4 laws. Larouche also needs to be exonersted. Trump given the Larouche treatment… Read more »