Via The Conservative Treehouse…

In a fantastic display of true investigative journalism, One America News journalist Chanel Rion tracked down Ukrainian witnesses as part of an exclusive OAN investigative series. The evidence being discovered dismantles the baseless Adam Schiff impeachment hoax and highlights many corrupt motives for U.S. politicians.

What is outlined in this interview is a  problem for all DC politicians across both parties.  The obviously corrupt influence efforts by U.S. Ambassador Yovanovitch as outlined by Lutsenko were not done independently.

Senators from both parties participated in the influence process and part of those influence priorities was exploiting the financial opportunities within Ukraine while simultaneously protecting Joe Biden and his family.  This is where Senator John McCain and Senator Lindsey Graham were working with Marie Yovanovitch.

Imagine what would happen if all of the background information was to reach the general public?  Thus the motive for Lindsey Graham currently working to bury it. 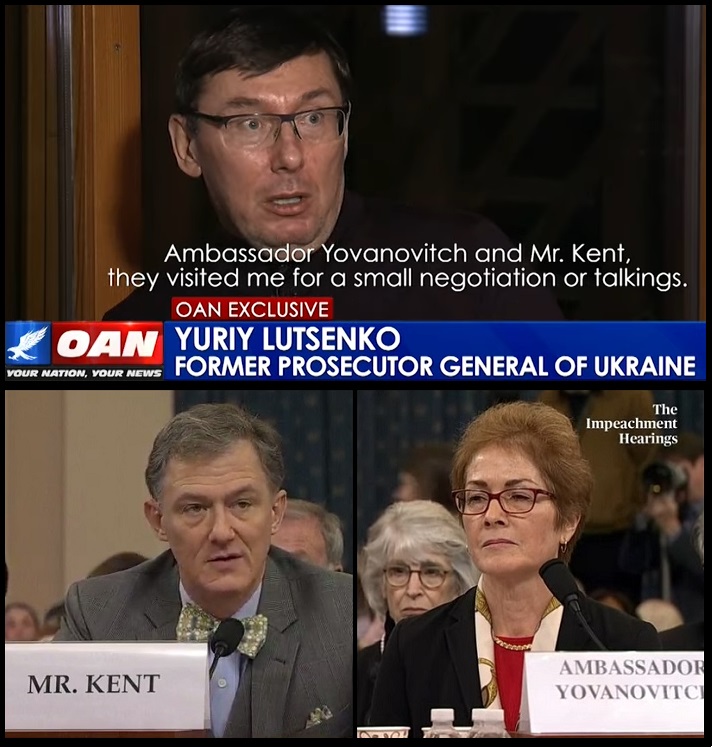 You might remember George Kent and Bill Taylor testified together.

It was evident months ago that U.S. chargé d’affaires to Ukraine, Bill Taylor, was one of the current participants in the coup effort against President Trump.  It was Taylor who engaged in carefully planned text messages with EU Ambassador Gordon Sondland to set-up a narrative helpful to Adam Schiff’s political coup effort.

Bill Taylor was formerly U.S. Ambassador to Ukraine (’06-’09) and later helped the Obama administration to design the laundry operation providing taxpayer financing to Ukraine in exchange for back-channel payments to U.S. politicians and their families.

In November Rudy Giuliani released a letter he sent to Senator Lindsey Graham outlining how Bill Taylor blocked VISA’s for Ukrainian ‘whistle-blowers’ who are willing to testify to the corrupt financial scheme.

Unfortunately, as we are now witnessing, Senator Lindsey Graham, along with dozens of U.S. Senators currently serving, may very well have been recipients for money through the aforementioned laundry process.  The VISA’s are unlikely to get approval for congressional testimony, or Senate impeachment trial witness testimony.

U.S. senators write foreign aid policy, rules and regulations thereby creating the financing mechanisms to transmit U.S. funds.  Those same senators then received a portion of the laundered funds back through their various “institutes” and business connections to the foreign government offices; in this example Ukraine. [ex. Burisma to Biden]

The U.S. State Dept. serves as a distribution network for the authorization of the money laundering by granting conflict waivers, approvals for financing (think Clinton Global Initiative), and permission slips for the payment of foreign money.   The officials within the State Dept. take a cut of the overall payments through a system of “indulgence fees”, junkets, gifts and expense payments to those with political oversight.

If anyone gets too close to revealing the process, writ large, they become a target of the entire apparatus.  President Trump was considered an existential threat to this entire process.  Hence our current political status with the ongoing coup.

It will be interesting to see how this plays out, because, well, in reality all of the U.S. Senators (both parties) are participating in the process for receiving taxpayer money and contributions from foreign governments.

A “Codel” is a congressional delegation that takes trips to work out the payments terms/conditions of any changes in graft financing.  This is why Senators spend $20 million on a campaign to earn a job paying $350k/year.  The “institutes” is where the real foreign money comes in; billions paid by governments like China, Qatar, Saudi Arabia, Kuwait, Ukraine, etc. etc.  There are trillions at stake.

[SIDEBAR: Majority Leader Mitch McConnell holds the power over these members (and the members of the Senate Intel Committee), because McConnell decides who sits on what committee.  As soon as a Senator starts taking the  lobbying funds, McConnell then has full control over that Senator.  This is how the system works.]

The McCain Institute is one of the obvious examples of the financing network.  And that is the primary reason why Cindy McCain is such an outspoken critic of President Trump.  In essence President Trump is standing between her and her next diamond necklace; a dangerous place to be.

So when we think about a Senate Impeachment Trial; and we consider which senators will vote to impeach President Trump, it’s not just a matter of Democrats -vs- Republican.  We need to look at the game of leverage, and the stand-off between those bribed Senators who would prefer President Trump did not interfere in their process.

McConnell has been advising President Trump which Senators are most likely to need their sensibilities eased.   As an example President Trump met with Alaska Senator Lisa Murkowski in November.  Senator Murkowski rakes in millions from the multinational Oil and Gas industry; and she ain’t about to allow horrible Trump to lessen her bank account any more than Cindy McCain will give up her frequent shopper discounts at Tiffanys.

Senator Lindsey Graham announcing today that he will not request or facilitate any impeachment testimony that touches on the DC laundry system for personal financial benefit (ie. Ukraine example), is specifically motivated by the need for all DC politicians to keep prying eyes away from the swamps’ financial endeavors.  WATCH:

This open-secret system of “Affluence and Influence” is how the intelligence apparatus gains such power. All of the DC participants are essentially beholden to the various U.S. intelligence services who are well aware of their endeavors.

There’s a ton of exposure here (blackmail/leverage) which allows the unelected officials within the CIA, FBI and DOJ to hold power over the DC politicians. Hold this type of leverage long enough and the Intelligence Community then absorbs that power to enhance their self-belief of being more important than the system.

Perhaps this corrupt sense of grandiosity is what we are seeing play out in how the intelligence apparatus views President Donald J Trump as a risk to their importance.

This provides at least one explanation why Graham seems set on a short trial to prevent witnesses exposing this kickback scheme.

We as law abiding citizens must cling to the desperate hope that Barr and Trump are waiting for the Senate to kill impeachment before then activating a real indictment avalanche of all involved in this “Good Fellas Restaurant” named Ukraine. Odds are dim we will ever see any indictments as that will place McConnell and Graham in direct opposition publicly to Trump. Hope springs eternal but not in the USA. Canned goods and Ammo

“This is why Senators spend $20 million on a campaign to earn a job paying $350k/year.”

Yep, It’s one hell of a democracy we’ve got here. (ps: double entendre)

It looks like the way things are going, pretty soon the only ‘reliable allies’ we have left in Ukraine will be the hard core neo-nazis with a host of unindicted war criminals leading the pack. Somehow, I wouldn’t be terribly surprised.

Real journalism for a change. Yet the biggest scandal of all is how none of this is likely to receive widespread publicity. The USA really does need a second revolution, otherwise it’s screwed.

Problem is, if the slate was somehow wiped clean for a fresh start, the whole enchilada would probably collapse. And who’d wipe it clean, the Democrats? Good Lord, just trading dysfunctions, that’d be.