The first red flag is buried in Bob Woodward’s latest book on the Trump Administration, Rage. According to the book, former Defense Secretary James Mattis spent much of his tenure in office plotting to undermine the elected leader who appointed him.

The book documents private grumblings, periods of exasperation and wrestling about whether to quit among the so-called adults of the Trump orbit: Mattis, [then Director of National Intelligence Dan] Coats and then-Secretary of State Rex Tillerson.

Mattis quietly went to Washington National Cathedral to pray about his concern for the nation’s fate under Trump’s command and, according to Woodward, told Coats, “There may come a time when we have to take collective action” since Trump is “dangerous. He’s unfit.” [Washington Post]

The Post glances over this incident quickly, treating it as just one more example of a disgruntled senior Trump official. But it is far more than that. This is the top defense official in the United States, himself a former general, discussing “collective action” against the president with a top intelligence official. “Collective action” could take many forms, perhaps a concerted effort to invoke the 25th Amendment and have the president declared incapacitated and removed. This would be a coup, and it would be motivated not by Trump’s incapacity, which is just a fig leaf, but by political disagreements.

JFK all over again.

Great video as usual! I don’t understand why all of these out in the open Coup Plotters couldn’t be arrested right now. Watergate was a Mirage engineered by John Wesley Dean, the Deep State Traitor in the White House, for the very same reason the Deep State is attempting to take down President Trump, because both of them were trying to normalize US-Russia relations. To learn what Dean did with his partner in Crime, Alexander Haig, you have to read “Silent Coup” by Len Colodny. The first couple of chapters have some typos but it was a NYT Bestseller. JFK… Read more »

According to Paul Craig Roberts the military industrial complex is behind most of America’s warlike and reckless Foreign Policy. There is a back-door system into the arms factories that takes older generals/colonels as they retire and puts them on a fat salary so that they can push for more weapons and Middle East wars which have done nothing whatever to be considered as a danger to the US. It is becoming blatantly obvious what armies are being sent around the world to do and it must be stopped. The EU knows this and is remiss in its duty not to… Read more »

Thanks Alex, and Alexander,
I’ve been watching you two for awhile and trust you…not something I do easily. Keep it up!

What a F&^% Nightmare of a Country

So, now Trump is bragging that he was all set to assassinate Assad but Mattis talked him out of it. Biden’s a bumbling carpetbagger but Trump’s a raving lunatic.

Diana
Reply to  What a F&^% Nightmare of a Country

Have we heard Trump saying that? If so, what was the context? I wouldn’t trust anything traitors like Mattis say.

Watch the video. Believe what you want. It’s all the rage, just don’t stay for dinner. My new take on Trump is he’s a Chucky doll masquerading as a human.

One better even. A cross between a Chucky doll and a prancing peacock.

The country’s doomed lady. Trump or Biden – makes no matter. It’s a battle of the bad and the badder.

Lessons need to be learned from the Coup d’Etat of Nov. 22, 1963! Due to feelings of patriotism, researchers have preferred to focus on all aspects of the problems of the evidence supporting the official narrative while ignoring the complexities of the power game that continues to be exposed related to current events so ably discussed here on “The Duran”. Just one point involving the eliminating of Robert Kennedy and other loyal members of the JFK adm. from effectively reacting to the criminal conspiracy that could not have reasonably been effected without at minimum the unspoken consent of a core… Read more »

Maybe Mattis walked into the oval office one day and saw a Chuckie doll at the desk with Trump nowhere to be seen and a light bulb went off in his head. 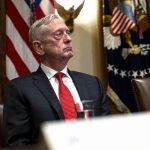 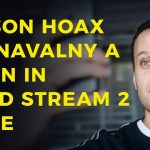