The Gateway Pundit — released a translated video of a phone call request for fake ballots customized by Chinese factory.  The manufacturer is reportedly in Kwangtung, China. In the video a caller is heard requesting a bulk order of ballots to ship to the United States. The order was reportedly for 5 million votes.

The constant controversy in the US presidential election has seriously undermined global confidence in the democratic system. Even Russian President Putin ridiculed each other, saying that the US electoral system is flawed. Moreover, after Trump’s lawyers’ team filed accusations of involvement in the US election to hostile countries such as China, Cuba, and Venezuela, video, audio and screenshots have also flowed out, alleging that underground factories in Guangdong, China have forged a large number of blank US ballots and exported them in the name of medical supplies. Overseas , the behavior is quite suspicious.

Has not yet recognized Biden’s victory, Putin: The US electoral system is flawed

Although most countries in the world including my country have recognized Biden’s victory, Russia has not yet recognized it. Russian President Putin personally explained the reason through a TV interview yesterday (22). “It is inappropriate to bet before the result is uncertain.” He emphasized that the election result must be determined in accordance with existing practices and legal regulations..

“Russia has no improper attempts, it is just based on procedures,” Putin said. “Failing to congratulate Biden will not change US-Russian relations because the US and Russia are already bad.”

Russian President Putin has been accused by the United States of violating democratic principles in several elections, and now he has in turn accused the American electoral system of defects. (Image source/Kremlin official website)

Lawyer Trump accused: China and other hostile countries intervene in the US election

The boss of the underground factory pointed out that someone had ordered it before, but he also bluntly said that it is impossible to forge metal patterns and anti-counterfeiting. (Image source / provided by readers)It is rumored that China forged votes.

As the US election was affected by the epidemic, more than 120 million blank ballots were mailed in advance. According to a source, an underground factory in Guangdong, China, which usually specializes in “forging invoices and falsifying accounts,” has forged a large number of blank American ballots since July with a monthly output of 500,000.

Judging from the screenshot of the dialogue, the boss not only said, ” We have the original model of this version. “We have ordered it before . “ There is still a lot of this in inventory. And because the ballots are different in each state in the United States, the underground factory can provide the original mold file of “Mississippi, Florida, North Carolina”, and emphasize that this is provided by the “previous customer”, and there are other states that can also do the ballots. , Not only these 3 states.

It’s worth noting that the boss of the underground factory actually stated that the metal patterns and anti-counterfeiting of the real ballots cannot be forged yet, but previously unknown people have ordered a large number of them, and the boss also said, “The amount is not a problem, the main thing is your money. In place, that amount is not a problem.”

As for the person who ordered previously? The boss only pointed out roughly that the order was sent from “Beijing”, and the other party requested that the finished product be sent to Zhuhai first, and then exported in batches to Canada, Mexico and other places under the names of medical supplies, personal letters, and trade.

Sources analyzed that although the forged blank ballots cannot be equipped with anti-counterfeiting design in the underground factory in Guangdong, they can only be said to be “semi-finished products”, but the other party did not directly ship these ballots to the United States, but to Mexico and Canada first. It is to finish processing locally.

If these blank ballots are finally processed and cannot even be distinguished by a machine, of course, they can affect the election to a certain extent, but the source said, “The CCP does not want to influence the election, but it wants to sabotage the election.

In fact, U.S. President Trump claimed in a tweet that the governor of California sent a blank ballot paper to everyone in the state “regardless of who they were”. Many of them “never want to vote, don’t vote, or don’t know what to vote for.” “Who” will therefore cause “election manipulation.” Although Trump’s words may not be fully believed, it suffices to show that even a blank ballot is enough to cause disputes.

The Question that must be answered is who in the US paid for the printing order?

I’d say it might have been Hunter Biden but most of his slush money disappeared in strip clubs and up his nose.

Qusay or Uday, take your pick. I think Qusay’s a better fit. Or maybe Netanyahoo’s son.

Anti-counterfeiting measures that the machine that processes them can’t detect.

America’s not a country any more. It’s a carnival side show.

The machine can detect them, as long as that little switch on its side stays on.

The Incredible Naïveté of Being

So, we’re not to think that such a proof could be as easily fabricated as anything the Democrats or the US or UK’s ‘pristine’ intelligence apparatchiks have engaged in these past many years?

What have we learned? Nothing?
What are the consequences of learning nothing? Nothing?
I think not. 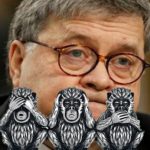