Obama’s former “security advisor”, Susan Rice, appeared on CNN with Wolf Blitzer to offer her take the violence that has enveloped many cities across the country over the weekend. Rather pin the carnage on the leftists who are actually promoting and doing the violence, she somehow tries to blame it all on the Russians.

“Based on my experience, this is right out of the Russian playbook as well. But we can’t allow the extremists, the foreign actors, to distract from real problems we have in this country that are long standing, centuries old, and need to be addressed responsibly by new leadership,” Rice says.

"This is right out of the Russian playbook" pic.twitter.com/luXiPV0bOq

After rambling on about how the Russians divide us, she continues with “And I would not be surprised to learn that they have fomented some of these extremists on both sides using social media, I wouldn’t be surprised to learn they are funding it some way shape or form. And that’s something we need to take seriously. But we cannot allow it to distract us from the real problem, that is an American problem, that we alone can address.”

“Both sides”? What “both sides”? It’s only wackjob leftists who are out there rioting.

But yes, blame everyone but antifa, radical marxists within Black Lives Matters, the democrat and socialist mayors who run the cities where the riots take place, and all of the crazed leftist groups who organize the protests that devolve into riots.

It’s simply a textbook case of ‘transference’. Methods intimately known by Rice and used by the US innumerable times in recent and past history are automatically ascribed to Russia. It’s a strange but predictable phenomenon. I wish I were back doing graduate work, as the phenomenon deserves a PhD thesis at the very least.

She can’t use the phone or e-mail anymore, never knows who might be listening.

Quote: ““Both sides”? What “both sides”? It’s only wackjob leftists who are out there rioting.”

Obama’s (and Rices) excellent results at supporting wackjob banderite ultra-right wing fascists in Ukraine gave her a clear understanding at how effective these groups can be, so she just had to throw them into the mix, along with antifa.

Vandalism and looting in New York City during “peaceful protests”:

Burning cars and shops during “peaceful protest” in Minneapolis:

There’s such a shortage of goods in Russia that they’re flying in Russians by the planeload to instigate civil unrest and loot American stores. 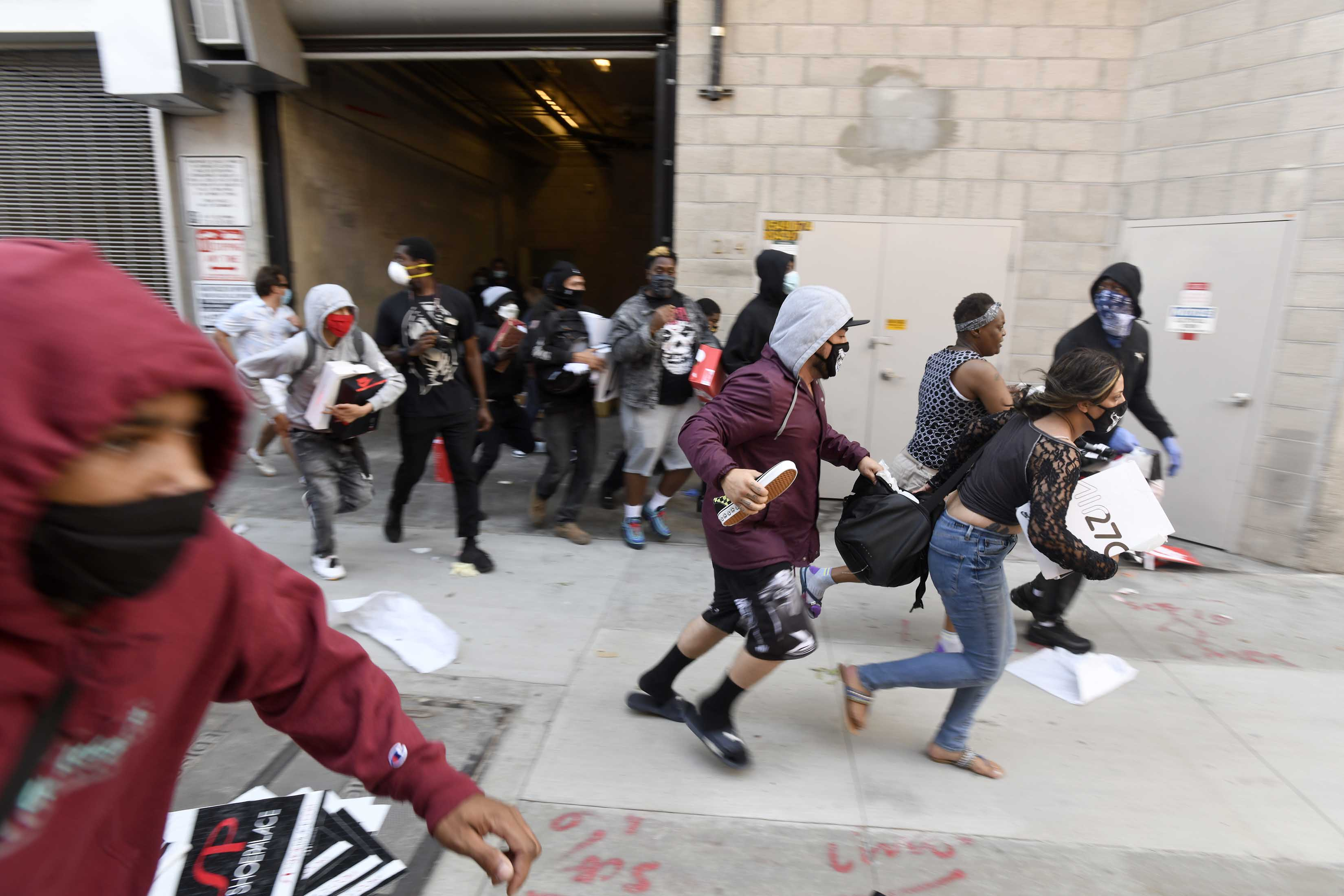 Have hoodie and mask, will travel. 😉

Hello, anybody home? Ve’ve come to destabilize your country, tovarish.

You black Russians are all alike, with your black sense of humor.

plus ça change, plus c'est ....
Reply to  Olivia Kroth

Oh, gosh – that’s been happening in dozens of cities across the US.

Looting’s part and parcel of these events. Been so ever since the Watts riots of 1965. Just like clockwork. It’s part of American culture.

Olivia Kroth
Reply to  plus ça change, plus c'est ....

Yes, true. This is very much a part of US culture, certainly not of “Russian” culture.

Russia is peaceful and quiet. No looting, no burning houses in Moscow. The parks reopened today and we are all walking, taking in a breath of fresh air. Russia is an idyll.

I spotted these guys in downtown Minnesota yesterday on the way to the peaceful demonstrations. I guess the mayor was right about that white supremacist bunch. I think they came in over the Canadian border with Ukrainian visas. 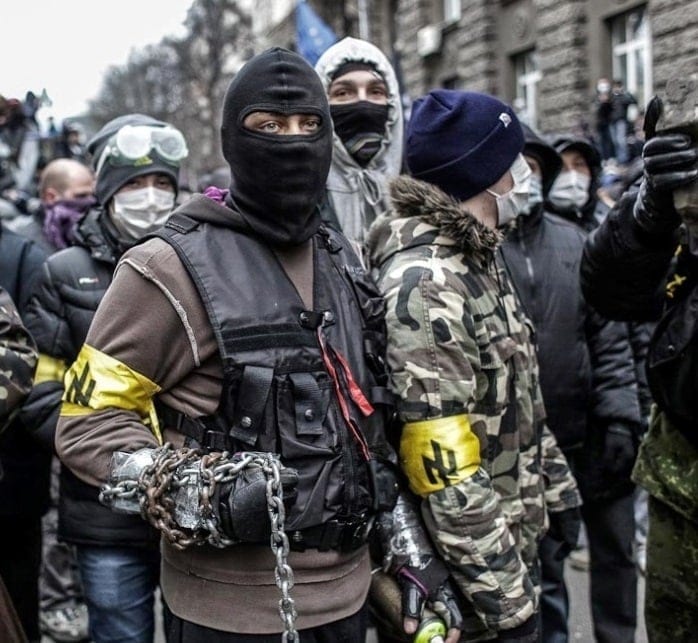 Who pays better I wonder, the Canadians or the Americans?

PS: Minnesota’s a state and Minneapolis a city. But you knew that already.

Quote: “We are now confronting white supremacists, members of organized crime, out of state instigators, and possibly even foreign actors to destroy and destabilize our city and our region,” Minneapolis’ Mayor Frey had tweeted Saturday.

Wow, you could just pluck out Frey and stick the mayor of Kiev in 2013 in there and not miss a heartbeat.

plus ça change, plus c'est ....
Reply to  Just like a mirror

Olivia Kroth
Reply to  plus ça change, plus c'est ....

“Obama’s former security advisor, Susan Rice, appeared on CNN with Wolf Blitzer to offer her take the violence that has enveloped many cities across the country over the weekend. Rather pin the carnage on the leftists who are actually promoting and doing the violence, she somehow tries to blame it all on the Russians.”   And what has Madame Rice got to say about the destruction of Kiev and the death of thousands of people in Kiev during the “peaceful protests” on Kiev’s Maidan? It certainly was not “the Russians” who instigated that …. Hm, hm, hm – who did… Read more »

I cannot tell a lie. It was my political progeny.

Well, you cannot tell a lie because you are George Washington. What about pour political progeny, Madame Susan Rice? Can she tell us the truth or has she been programmed to lie?

Monsieur Pompeo’s slogan is “We lie, we loot, we burn, we steal other countries’ oil and gold, we exploit, we murder, we rejoice, we eat Chinese bat soup and Russian borscht, therefore we get fat and fatter. Never mind, the USA is a beautiful country. When everything is looted and burned down, the US looks best.”

Yeltsin did a mean jig
Reply to  Olivia Kroth

She’s just another poor kukla. I think it’s time to resurrect that show, btw. …in America. We could call it the Trump and Biden Reality Show.

“A fabrication a day keeps the toadies in pay.”

I like it. I will use it, it is a splendid new aphorism:

“A lie a day keeps the toadies in pay”.

i knew it……it was the Russians…..i had that feeling…..they are evil and tying to take down our wonderful country…..that Putin!!!!…..i’m going to phone him right now and give him a piece of my mind…..he cannot continue to degrade our beautiful nation….we are an empire that only wants to help and assist other people of the world….boy that Rice is really an astute student…..nailed it…..Russia…brillant!!!!!

Drastvui, Tovarish. Need a translator for your phone call to President Putin? I can help…

Putin is SO jealous of our wonderful and harmonious multi-racial society that he just can’t help himself.

The Michelin Guide
Reply to  Nirvana Z US

America’s like a well-seasoned broth, always simmering and poised to boil over unless you keep a sharp eye on it. I give it 2.5 stars, for effort.

I have no more puke to throw up in my mouth, i’m officially out.

Read some more of our MSM’s tales. I guarantee you’ll generate a new supply in a hurry.

Can’t find the video on CNN YT page, guess they knew it was that stupid.

Actually from what I’ve read on the Aangirfan website, this seems to have been a false flag with the aim of stirring up riots and it wouldn’t be the first time. I would suggest looking into it and the anomalies before going further.

I agree, this whole thing looks very strange. Those riots have been very well coordinated all over the USA. Who are the coordinating heads behind it? You will probably find the heads of the hydra bunkered in Langley, Virginia….

Ruptly video: Floyd and his alleged murderer (police officer) were coworkers in a Minneapolis night club, Floyd as indoors bouncer, police officer in his free time as outdoor security. They certainly knew each other from work.

This is certainly interesting, isn’t it? It makes us wonder if the so-called “murder” of Floyd was a carefully prepared put up job ….

Does President Trump know this? Maybe someone should send the video to his lawyers and office.

wpDiscuz
39
0
Would love your thoughts, please comment.x
()
x
| Reply
Send this to a friend
We use cookies to ensure that we give you the best experience on our website. If you continue to use this site we will assume that you are happy with it.Ok