United States activists stand with President Maduro and the people of Venezuela in resistance to Washington’s attempts at regime change. Departing Venezuelan diplomats, ordered out of the country on April 15th by the Trump administration, gave the keys to its Washington DC embassy to activists, now called the Embassy Protection Collective (EPC), along with permission to remain until a permanent protectorate can be found. President Nicolas Maduro has extended his support to the lawful occupants which consist of veterans, senior citizens and students, and are members of CODEPINK, Popular Resistance.org, People’s Dispatch and the ANSWER Coalition.

The EPC stands guard against the infiltration and capture of the embassy by supporters of the self-proclaimed interim president, right-wing US puppet, Juan Guaido. In February, Guaido’s supporters seized the Venezuelan embassy in Costa Rica and blocked its lawful delegation from entry.  According to Article 22 of the Vienna Convention, host countries are required by international law to protect foreign embassies.

The US Secret Service and DC Police continue to block the Venezuelan embassy’s egress with barricades, while Guaido’s supporters surround the building’s perimeter. Both actions taken together render freedom of entry and exit impossible. 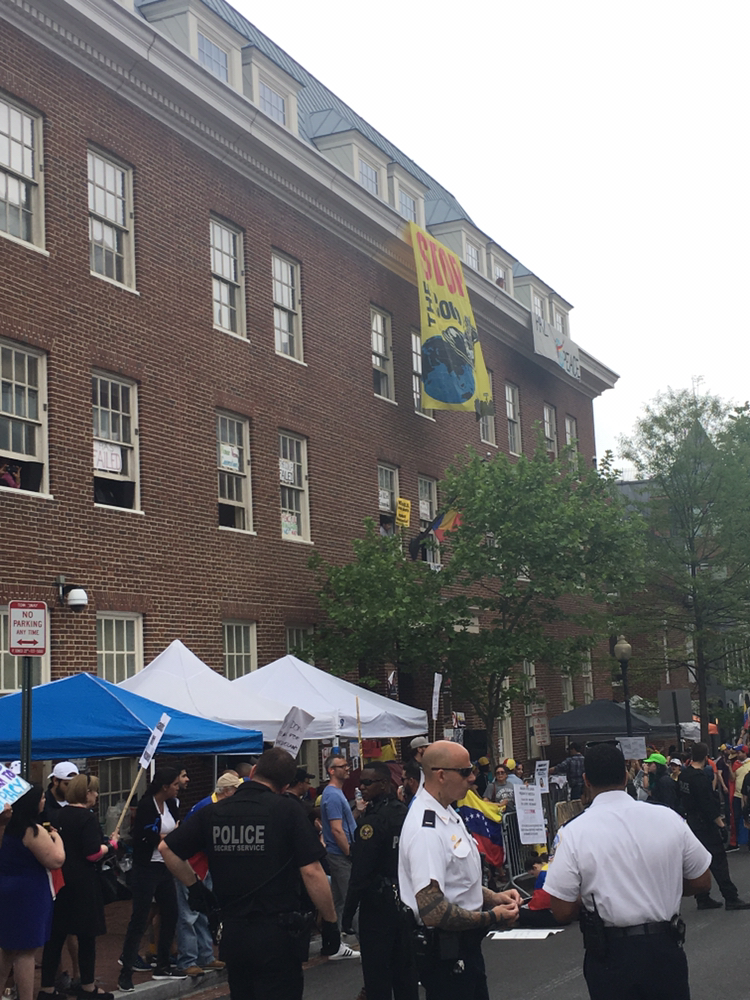 Guiado’s supporters assault and verbally abuse defenders of the EPC. Defenders are routinely pushed, punched, sexually assaulted, and tortured by the use of painfully blinding high intensity laser, strobe and flash lights, as well as deafeningly loud noises generated by bullhorns, air-horns, and the clanging of pot and pans at close range. Despite law enforcements’ extensive presence, this violence continues with little censure. Their taunts are misogynistic, homophobic and racist.

Guaido’s supporters have attempted multiple break-ins and were successful once. The entire time law enforcement stood idly by, despite the embassy and its security cameras sustaining damage.  The EPC’s lawyer made calls and sent a letter to the Secret Service demanding action against these illegal activities.  To date, they have received no response. On Friday, May 3rd, activists reached out to the DC police commissioner and elected officials to make these same demands.  As of Saturday, these illegal activities have stopped.

However, Guaido’s supporters repeatedly block food and medical supplies from reaching the EPC, including those raised up in baskets. An attempt to throw food to those legally inside resulted in arrest for the charge of “throwing missiles”.  Nonetheless, EPC and their defenders say they will persevere until their mission is accomplished. 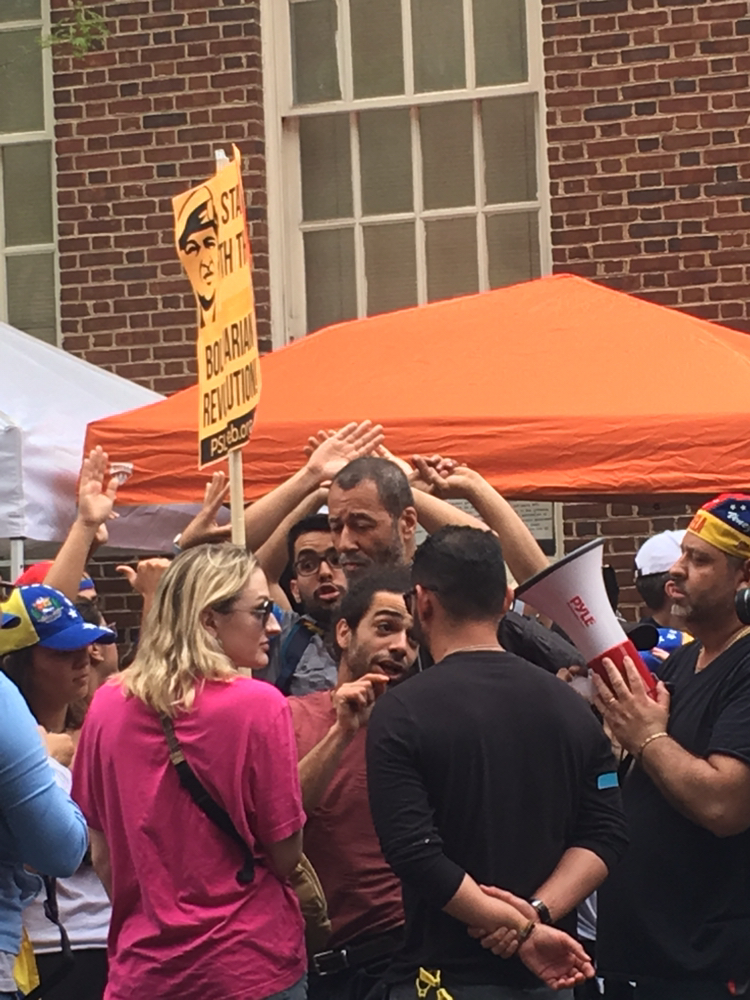 While Guaido’s supporters are unimpeded as they assemble tents around the embassy to seize control over the building’s perimeter, activists face different treatment.

On May 4th, Guaido’s supporters swarmed EPC defenders when they tried to erect a tent. Tighe Barry, a CODEPINK member of the Embassy Protection Collective says he was pushed so hard that he backed into a secret service agent. However, instead of arresting the perpetrators, police arrested the victim. He remains in custody at this time. CODEPINK has asked that its supporters contact the DC US Attorney to demand that the charges against him be dropped and that he be immediately released. 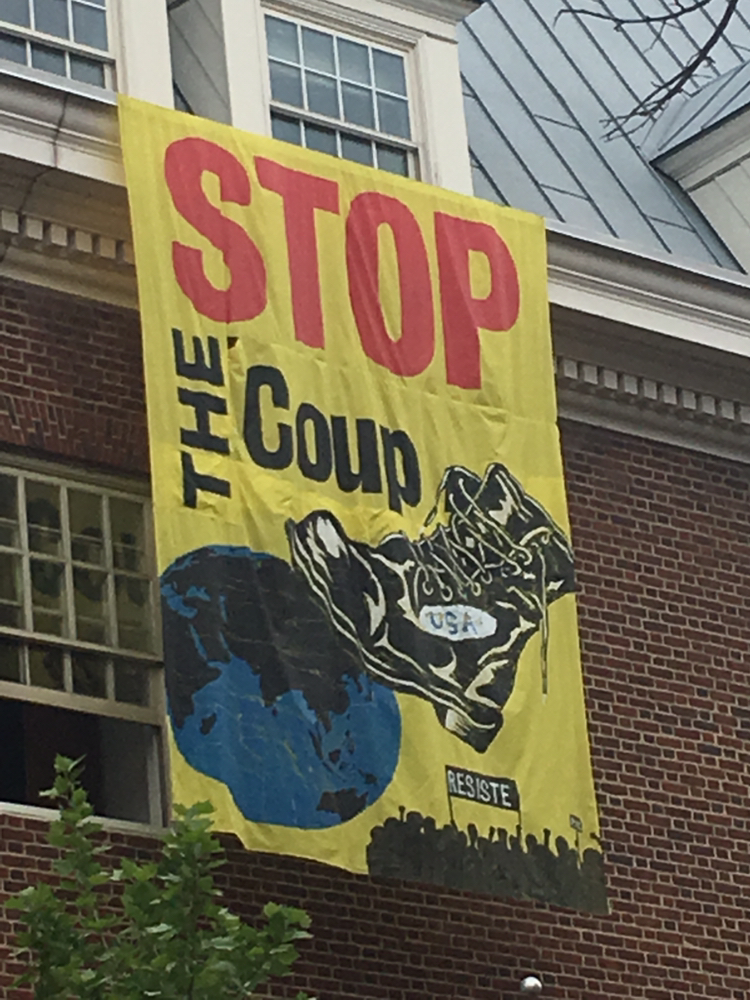 US activists recognize that Venezuela’s fight against Yankee Imperialism places it at the epicenter of their fight against fascism. Venezuela’s struggle to remain autonomous, like Cuba and Nicaragua, protects all countries and people from Washington’s tyranny, both abroad and domestic.

While activists worldwide support different struggles, all share the same imperialist enemy and its police state, military industrial complex and intelligence community.  So come to DC to lend your support or be active where you are and be a part of liberation history!

Lauren Smith is an independent journalist. Her work has been published by Counterpunch, Common Dreams, Telesur, Monthly Review, Alliance for Global Justice and Global Research, CA amongst others. She holds a BA in Politics, Economics and Society from SUNY at Old Westbury and an MPA in International Development Administration from New York University.  Her historical fiction novel based on Nicaragua’s 1979 revolution is due out this year.

Here is a recent Department of State document touting its successful plans for Venezuela that was removed from State’s website shortly after it was posted:

The fact that tens of millions of Venezuelas are suffering because of the American-led sanctions regime seems to not bother either Mike Pompeo or John Bolton; they are just standing in the way of getting the job of redesigning Venezuela in America’s image.

TELESUR reports: Police Arrest Second Top Venezuelan Opposition Lawmaker for Attempted Coup The alleged crimes Zambrano is charged with are: “treason to the homeland, conspiracy, instigating and insurrection” among others. The Bolivarian National Intelligence Service (Sebin) arrested opposition lawmaker Edgar Zambrano Wednesday for his participation in the attempted coup on April 30. The arrest was confirmed by the president of the National Constituent Assembly (ANC), Diosdado Cabello. “A little while ago they detained one of the leaders of the April 30 coup attempt, Edgar Zambrano,” he said in his television program. On May 2, the Supreme Court of Justice (TSJ),… Read more »

The US government has definitely stepped beyond the pale, and has thrown off any attempts to simulate the rule of law. It is perfectly clear that they now do whatever they want, defying any and all laws and authorities.

Even the Nazis were a great deal more decorous and careful at least to give the appearance of conforming to the law.

This is weird: “The decision to rerun a local mayoral election in Istanbul has sparked scathing criticism in Brussels — ironically, from none other than the EU’s Brexit negotiator Guy Verhofstadt. Tweeting about the move, which was branded a “coup” by a Turkish opposition newspaper, Verhofstadt said it highlighted that Turkey was “drifting towards a dictatorship” and offered “full support to the Turkish people protesting for their democratic rights.”

But then how come they call for a rerun of an election in Venezuela to reinstall their democratic rights. The Western world is weird.

PRESS TV IRAN reports: Venezuela to prosecute 7 lawmakers for supporting coup bid Wed May 8, 2019 05:20AM [Updated: Wed May 8, 2019 05:25AM] Venezuela’s top court has ordered the prosecution of seven lawmakers for high treason and conspiracy because of coup attempt against the Government of President Nicolas Maduro. The Supreme Court announced the ruling, saying it had asked Attorney General Tarek William Saab to handle a criminal investigation into the case of the seven opposition deputies. The lawmakers are suspected of “betraying the homeland” and “instigating an insurrection,” among other charges, said the court. Following the announcement, the… Read more »

Wonderful how the Venezuelan intelligence flushed these vermin out.