If I were to sum up the events of Ukraine in one short sentence, I would say: In the fall of Ukraine, the metaphorical west has fallen once again and cannot get up. The proof for this simple assessment should be sought in the answer to a larger contextual question: How does one actualize one’s dream of time travel floating between past, present, and future in order to change events at will and in a manner that the sum total of all outcomes results in maintaining the illusion of a “super-power” status? In other words, how does one successfully nurture one’s god complex? In reality, one does not and one cannot.

Yet, in a world of fiction, in an alternate universe of Westopia “sidewise in time,” some are creating industrial-scale alternate realities, alternate histories, and alternate personalities in well-crafted memes and flicks broadcast 24/7 through virtual channels while imposing a blockade on news of facts on the ground. Is it effective? No, it is not. The bubbles burst as soon as they are created and the cost of spins has become enormous. Why then do they keep on doing this? For two reasons: 1) because they can; 2) because they have no other real, tangible, and effective alternatives. Grasping at tiny twigs while one is sucked into a whirlpool is not effective but hope springs eternal.

Great many articles are providing good details and real time reports about what is actually happening in Ukraine and the Russian operations. In this article, I hope to brief the readers of this blog on how people in Iran are generally viewing the Ukrainian crisis and what sort of stance might emerge out of this particular perspective as far as the Resistance camp is concerned.

Cesarean Section of a New Europe

Tangible and measurable regional geopolitical shifts supported by facts on the ground are now slapping nations right, left, and center into choosing one of three options: 1) Both legs in Western boat; 2) Both legs in an Eastern boat; 3) Both legs in one’s own independent boat. Being motivated by either fear or greed and having a leg in one boat and the other in another, especially when the boats are each moving different directions, is a hazardous for one’s national health. Ouch. It is no longer an option.

In July 2006, during a massive bombardment of Lebanon by Israeli regime occupying Palestine, many Lebanese communities were destroyed in their entirety and thousands of civilians were killed with direct military and financial support from the regimes occupying the United States, Western Europe, and Saudi Arabia. Deliberately trying to prolong their major assault on Lebanon in the hope they could “finish” Hizbullah, then U.S. Secretary of State Condoleezza Rice said:

“I have no interest in diplomacy for the sake of returning Lebanon and Israel to the status quo ante. I think it would be a mistake. What we are seeing here, in a sense, is the growing – the birth pangs of a new Middle East and, whatever we do, we have to be certain that we’re pushing forward to the new Middle East, not going back to the old one.”[1]

Amen. In fact, a new “middle east” was born and it was renamed West Asia in favor of the Resistance from the shores of Persian Gulf and Red Sea to offshores of the Mediterranean. Ms. Rice had midwifed for the United States of America “Labor Pains of a Stillborn Foreign Policy”[2] as Robert Scheer characterized things.

Nevertheless, she dispensed some verbal nuggets that could be used to apply to Ukraine today. One thing is for sure, Ukraine cannot return to status quo ante and what we are witnessing is a C-section of a new Europe and whatever the countries involved do, they have to be certain they are pushing forward to a new Europe and not going back to the old one. A better European country is, for certain, a country that is not a servile follower of the US in its own region or elsewhere around the globe.

United States Mafia Regime the Root Cause of Ukrainian Crisis

One of the most significant factors that has led to the current crisis in Ukraine is the fact that the power-holders of the “west” are consistently and habitually untrustworthy pledge-breakers. The current crises in Ukraine are just a symptom of that chronic disease.

Ayatullah Khamenei delivered a speech on the occasion of the Prophetic Mission, or Bi’that of Prophet Muhammad (Sallallahu Alaihi wa Aalihi wa Sallam) on March 1, 2022. In that speech, the Leader of the Islamic Republic of Iran could not have been more frank in his characterization of the current crisis in Ukraine. Excerpts from his speech are quite straight forward. As always, he pulled no punches:

“Basically, the regime of the United States of America is a regime that creates crises and feeds on those crises. The United States feeds on diverse crises created all over the world. [United States of] America is a mafia regime and Ukraine, too, is a victim of this policy of crisis creation. [United States of] America brought Ukraine to this point by infiltrating into the internal affairs of that country, inciting uprisings against its governments by velvet movements or color revolutions, by presence of US senators in the gatherings of oppositional groups and by creating, toppling this government and replacing it with that government. Naturally, they led to this point. We, of course, are against wars and destruction anywhere. This is our fixed policy.”

“Regarding the events in Ukraine, [too] we are for halting the war but the solution to every crisis is possible only if its root causes become known. The root cause of the crisis in Ukraine is the policies of the [United States of] America and the West. One must know these and evaluate and judge the events based on them.”[3]

Last Friday, Hujjatul-Islam Khatami, the leader of the Friday Prayers in Tehran, had echoed similar views to a large crowd of participants and pointed to the US and some European countries as the main culprits of the crisis in Ukraine. He said,

“The system’s position about Ukraine has been expressed by the officials but our overall policy regarding similar issues is that we invite all countries that are involved to refrain from escalating and enter into dialogue. Our main concern is that innocent people might get killed. In this event, NATO provocation with [the US] America as its main axis has made the condition more complicated in the region. This is a direct result of [the US] America’s meddling and prying all over the world; it falsely considers itself a superpower while it is not a superpower. On the other hand, in this narrative, the European countries are constantly beating the drums of war as if they see their bread in this war.”[4]

In his most recent speech, Sayyed Hassan Nasrullah, too, echoed exactly the same sentiment. He said,

“The Western countries did everything except direct confrontation against Russia. From surrounding to sanctions to closing of the skies and ports to sending arms to Ukraine to opening all doors to import rebel forces to Ukraine… but when [the US] America attacked Afghanistan, you know very well how they behaved. When they attacked Iraq, what happened? How did they treat [the US] America? Frankly, how did they actually regarded all the wars [the US] America created? How have they been approaching the aggressions of Zionist regime against Gaza and the war of aggression and sanctions against Yemen for years now and all these destructions and killings they have created? So, a comparison between current stand by the west with that against [the US] America’s wars show a double standard.”[5] […more] 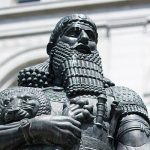