“Alpha (Alfa) Air Ukraine engages in cargo transport by contract with other nations, or on behalf of the Ukraine government.  Alpha Air operates with aircraft such as the Ilyushin IL-76 heavy cargo lifter. For example it has been reported that on July 6th, 2019, IL-76 TD UR-COZ was employed to transport weaponry form Ankara, Turkey to Tripoli, Libya.” 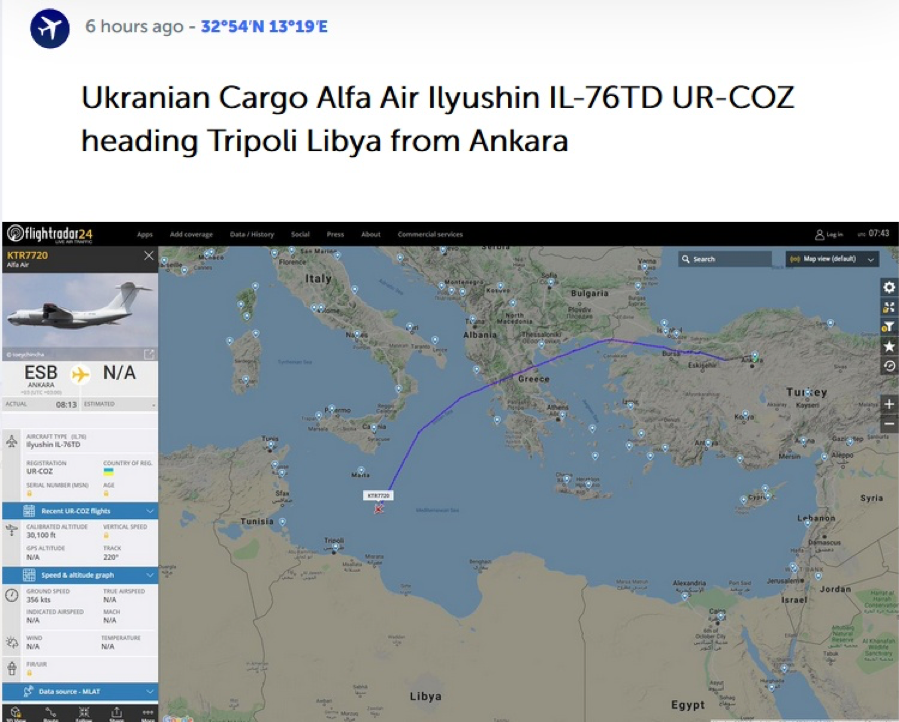 The transport represents a significant amount of weaponry supplied by Ankara to the Libyan war theater. Since the flight originated from Turkey, it is presumed that most weaponry is of the NATO type. The IL-76 can also transport troops.

However, it’s quite possible and even likely that the shipment contains a mixture or Russian weapons sourced from the Ukraine and/or Israeli weapons, in conjunction with Turkish- supplied NATO armaments and possibly tanks.

Now, the central question is about the forces receiving these weapons – will they be Misrata rebels? …or the GNA?  Since Misrata rebels – who work closely with al Qaeda and Islamic fundamentalists – supply cheap offshore oil to Turkey, the belief is that this weaponry will be supplied to the Misrata, thus prolonging chaos and unrest in western Libya. Turkey has relied on Misrata oil supplies since the US government ended Turkey’s waiver for purchasing Iran’s oil.

Thanks again for posting!

I’d also like to thank DJ our president for posing, and all the good folks at the DNC debates and Congress too. What would America do without y’all?

probably much better off

Who needs a functioning government? Illusions do it best.

PS: The less it functions, the greater the opportunity for neoconnivers to grab the wheel.

http://libyanwarthetruth.com
One thing for sure, the ‘receivers’ won’t be LNA.
More proof of the underlying malevolence of neoconazion.

Failed state Ukraine sticking their nose in other people’s business. How about paying their debts for gas deliverance to Russia’s GAZPROM first?

Freedom molecules are on the way.

Tales from the Quirky Side
Reply to  Brownnosian Movement

More like quarks. Here today, gone tomorrow……..and you need an investment the size of a Hadron Collider to get them there.

Did they send any drunken neo-nazis to man these Ukrainian guns?

Pin the Tail on the Logician
Reply to  Drunken MICs running amok.

We tried applying it to our ICBMs but it’s the damn russkies again. They refuse to share and our spies keep getting caught.