The escalating tensions between Russia and Ukraine are a cause for grave concern, except perhaps for those in Washington who will make money out of it if war or some sort of invasion happens.

Shamefully, in Britain the only people who seek to stop this madness, if for their own reasons, are leftists. The Stop The War Coalition has launched a petition, currently on the homepage of its website. But should we look to Britain, in particular British history, for a solution?

Ukraine and Russia are two different countries, so are Scotland and England; in the distant past the two fought many wars against each other, but now, although Scotland remains a unique country with its own heritage, parliament and legal system, Scottish MPs sit in the English House Of Commons, and two recent prime ministers – Gordon Brown and (technically) Tony Blair – are Scotsmen. There are no border controls between the two nations, and any antagonism between the two is usually related to sport.

On the death of the Virgin Queen in March 1603, James VI of Scotland succeeded to the English throne as James I. He was a great-great grandson of Henry VII. England and Scotland remained separate nations until the Act Of Union in 1707. At that time, Queen Anne was on the Throne; her Consort was Prince George of Denmark. This two nation/one nation set up has worked surprisingly well for the past three hundred years. Scotland has much beautiful scenery and an abundance of natural resources, especially oil and gas. This begs the question, can Ukraine and Russia come to a similar accommodation?

True, the antagonism between these two sovereign nations is much more recent, most notably there was the Holodomor, but this wasn’t a Russian crime, it was a Soviet crime, and ordinary Russians also suffered terribly under this lunatic system. Vladimir Putin is not Stalin. Also, the two nations share much in common, for one, they are both overwhelmingly white. Ethnic Russians are the largest minority in Ukraine, and there are perhaps two million ethnic Ukrainians living in Russia. Because the two nations have much in common, by cooperating with rather than opposing Russia, both countries will gain. Only the warmongers will lose.

Ukraine and Russia are far closely linked than either England or Scotland, the Scots are Celts/Picts, while England was founded by invading Germanic people from Saxony.. The Union of the two countries created Britain, which led to the Scottish enlighten, and the British empire.. Russia and Ukraine have a even more closer connection, the Rus people began in Ukraine, the early Christian kings created what was to become a unified Russia.. Russia was founded by slavic people and early Viking settlers, there is practically No ethnic distinction between Ukrainians and Russians, but the Hitler loving, Stephan Bandera supporters have created… Read more » 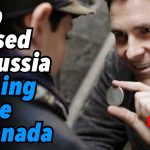