The dark red coloured areas show those which are now firmly under the control of the Syrian government.  The areas which are more lightly coloured red shows areas where the Syrian army has made recent advances but has not yet fully consolidated its control.  These now stretch all the way to the Iraqi border.  In addition the Syrian army has made decisive advances in northern and central Syria, gaining control of large belts of territory in eastern Aleppo and southern Raqqa and around and east of Palmyra.

The grey shaded areas are those controlled by ISIS, where it has an actual physical presence.  Most maps of the Syrian conflict give a misleading impression of the territory under ISIS’s actual control by including in it large stretches of empty desert which properly speaking are not controlled by anyone.  What is true is that until recently fast moving ISIS columns have been able to move more readily through this territory than the forces of other participants in this war, which is why ISIS has been able to launch sudden attacks on places like Palmyra and has also been able to deploy fighters in places like southern Aleppo province, from whence they were able to threaten communications from western and central Syria to Aleppo, but where they have now been surrounded.  The intervention of the Russian Aerospace Forces has made these sudden movements more difficult, though it is important to stress that the total number of Russian aircraft at Khmeimim air base at any one time is relatively small, with many of these aircraft committed to supporting Syrian army operations elsewhere, so that the Russians cannot respond immediately to every ISIS movement.

The yellow coloured areas at those now controlled by the Kurdish YPG.  As is clear, this is now a large block of territory in north east Syria along the Turkish border.  There continues to be much discussion of Syria becoming federated or partitioned.  Whilst my opinion is that this is unlikely to happen, it remains the case that the Kurdish controlled territory is the only part of Syria where either option might be theoretically achievable.  It is important to stress however that the territory currently controlled by the YPG is not exclusively populated by Kurds.  Much of this territory has a predominantly Arab population.  The YPG controls this territory because earlier in the war the Syrian army withdrew from it to defend ‘useful Syria’ along the coast, whilst the YPG has succeeded since then in driving out from this territory ISIS and those other Jihadi groups who at various times had sought to fill the vacuum caused by the withdrawal from this territory of the Syrian army.

The Jihadi (basically Al-Qaeda) controlled areas are those shown in green.  Note that the salient along the Turkish border dividing the western section of the Kurdish zone from the remainder of the Kurdish zone in the east is actually controlled by the Turkish army, having been occupied by the Turkish army as a result of Turkey’s Operation Euphrates Shield, which was launched in August 2016.  In the far south west – on the Golan Heights – Israel provides the Al-Qaeda led Jihadis there with the same sort of protection there that they are being given by the Turkish army in the far north.  There is also a large continuous area of territory in the north west centred on the province of Idlib, which was captured by the Al-Qaeda led Jihadis in the first half of 2015 (before the Russian intervention).  Whilst territorially large, this area is poor and heavily mountainous, and is now apparently the venue of fierce internecine fighting between Al-Qaeda and various other Jihadi groups.  The Syrians and the Russians have for the moment decided to leave it alone, and it is covered by one of the ‘de-confliction areas’ agreed between the Russians, the Iranians and the Turks back in May.

Further south, apart for the Golan Heights, there are small and increasingly isolated Al-Qaeda/Jihadi controlled pockets of territory in south west Syria, which are becoming steadily encircled as more territories come under the control of the Syrian army.  In particular the Syrian army has in recent weeks been making rapid progress clearing the remaining pockets of Jihadi resistance near Damascus.  The flashpoint in the south is remains the town of Daraa, where the Syrian conflict began in 2011, and which remains divided between Syrian army and Al-Qaeda controlled areas.  Recently President Assad ordered his brother Maher Al-Assad, who has just been promoted Major General, to take command there.

In the far south east, close to the Iraqi border, there is still the small and now hopelessly isolated US base at Al-Tanf, from which according to some reports the US is now planning to withdraw.

The situation in Syria is changing rapidly.  To get a sense of how completely transformed it has become, compare the above map with this map showing the situation as it was in September 2015, just before the Russians arrived. 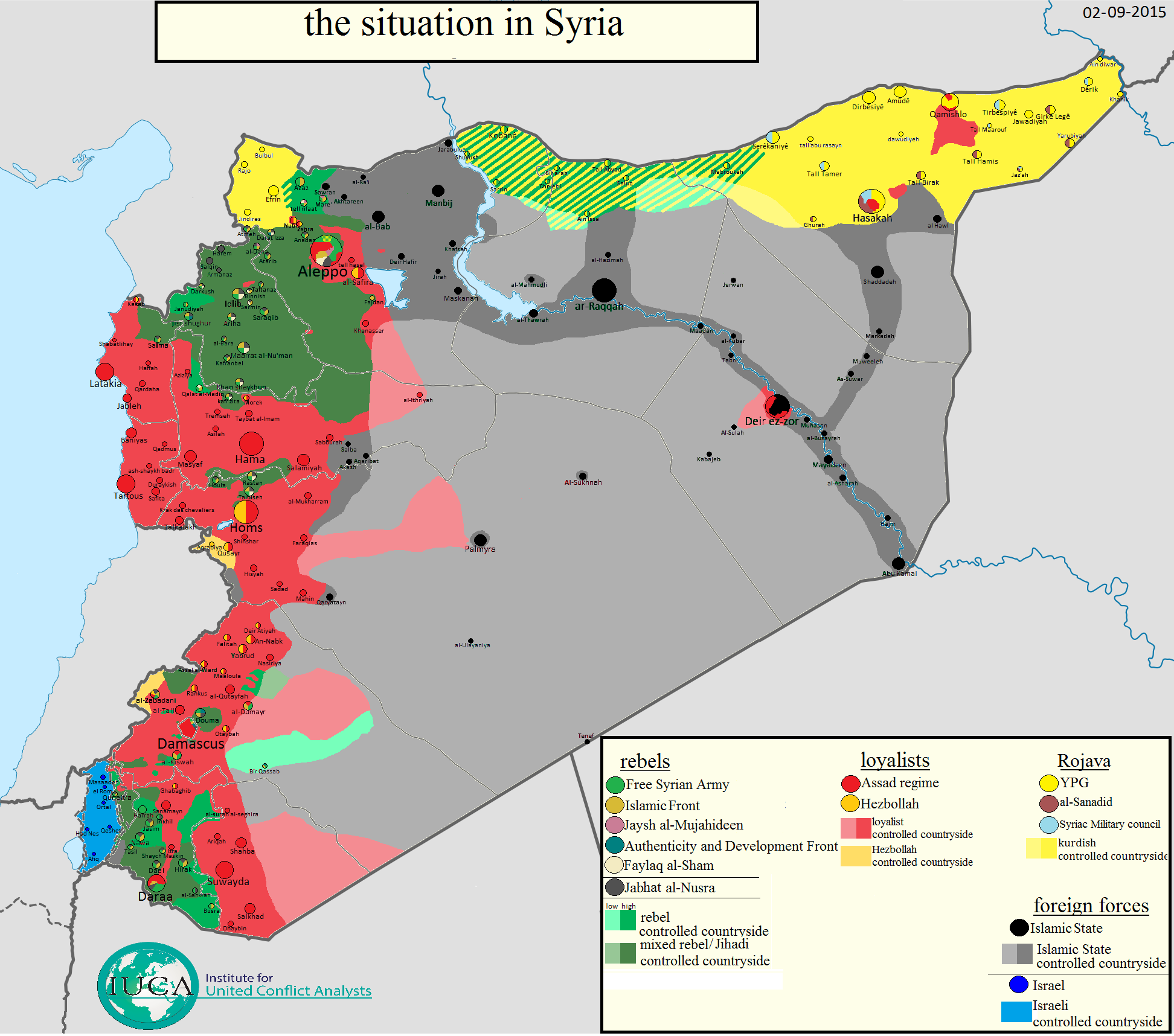 At that time the Syrian government was clinging on to a narrow stretch of territory on Syria’s western coast, road links to Aleppo from central Syria had been almost completely cut off, large areas of southern Syria were under Al-Qaeda led Jihadi control as was much of the countryside around Damascus, and ISIS controlled large stretches of territory in northern and central Syria, including Palmyra, and was contesting territories along the Turkish border with the YPG.

The Russian expeditionary force to Syria is believed to number around 5,000 men.  The transformation of the course of this very complex and bloody war by the intervention of this numerically small force is remarkable.

Rarely in history has such a decisive outcome been achieved with such economy of force.