Turkey blows past 86,000 cases with economy on the brink…

For the first time going back to February 25 when Iranian leaders first publicly admitted they had a serious outbreak on their hands, and with the country establishing itself with the grim distinction of remaining the Middle East epicenter, another regional country now leads in total infection numbers outside the US and Europe. As of Monday morning, Turkey has 86,306 cases, surpassing China’s 83,817 and Iran’s 83,505 reported cases.

Turkey on Saturday confirmed that its numbers had risen to over 82,000 – a jump of nearly 4,000 cases from Friday, surpassing Iran for the first time ever, making it the new regional epicenter.

Over the weekend the Interior Ministry announced it was extending travel ban orders between 31 major cities for at least 15 more days. 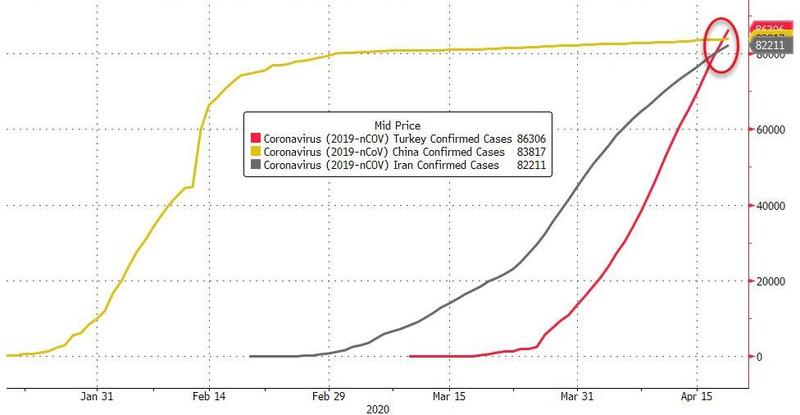 Ankara has still held out against ordering a nationwide lockdown like other countries with its high numbers of cases, only opting to close schools and bars and imposing a weekend curfew only. It’s also imposed various age-restricted curfews.

“At [Turkey’s] level, most countries are implementing a full lockdown,” one virology expert was quoted in CNN as saying. “A partial lockdown can be good, it can balance keeping some of the economy functioning while still trying to contain the outbreak.”

The government has maintained its hospitals and heath care system is still functioning optimally and is nowhere near capacity, as Foreign Policy describes:

As the number of coronavirus cases has increased, Turkish Health Minister Fahrettin Koca has sought to allay fears of an overwhelmed health system. Speaking on Friday, Koca said that unlike Western nations, Turkey’s hospitals still hold excess capacity and that intensive care units were not exceeding 60 percent occupancy. A licensed physician, Koca’s daily briefings have made him a star on social media over the course of the pandemic; he has gained over 4 million followers on Twitter since the beginning of the year.

“Turkey’s problems with containing the virus came into focus on April 10, when a late announcement of a weekend curfew led to panic buying across the country,” FP adds.

The already battered Turkish economy looks to be pummeled further by the crisis, as the Turkish lira’s recent plummet to a near-historic low of 6.95 lira to the dollar demonstrates.

Recall too this report from ten days ago: “Turkey has held talks with the United States about possibly securing a swap line from the U.S. Federal Reserve and has discussed other funding options to mitigate fallout from the coronavirus outbreak, Turkish officials said on Friday.”

As recently as Sunday Presidents Trump and Erdogan spoke on the phone and agreed to continue pursuing “close cooperation” to contain the pandemic.

Iran is already finished with the epidemic. There will be more cases and deaths (among the elderly) but trivial given Iran’s population. Turkey should not only hold out against the hysteria pandemic, but should open its schools, as children are barely affected at all, and help develop herd immunity.