Tulsi Gabbard admitted impeachment talks have been going on since Trump won, driven by “hyper partisan interests.” Nonetheless, she expressed support for the inquiry in Ukrainegate and ultimately supports impeachment, otherwise Trump gets off the hook and looks good while the Dems, once again, look bad. In my dilettante opinion, Gabbard will lose support among conservatives and nationalists if she votes for impeachment – and, at the same time, she will not earn more liberals to her cause. Truth be told, by and large, liberals hate her anyway. Any democrat criticizing Hillary Clinton, the DNC, or Barrack Obama is a GOP puppet and Putin stooge in their eyes.

Tulsi backed Andrew Yang’s Universal Basic Income [UBI] proposal, saying it’s a good idea to provide social security for people to make “the kind of choices they want to see.” What Gabbard doesn’t know is that, without taxing economic rent, gains from the UBI will get soaked up by rent-seekers and money lenders. Andrew Yang likes to portray himself as a “smart Asian man,” and on the question of rents, he claimed UBI will drive rents down because rentiers will compete for renters. I don’t suspect Andrew Yang of being illiterate or naive when it comes to economics, so this particular claim of his can’t be fueled by ignorance, it’s fueled by sophistry. Without land-value capture, UBI will fail to solve poverty and homelessness.

Tulsi Gabbard responded to media attacks who paint her as a friend of dictators. She used sensational expressions like “the slaughter of the Kurds being done by Turkey,” and “Donald Trump has the blood of the Kurds on his hand.” She accused politicians on both sides and the mainstream media who supported this regime change war of the same. She mentioned CNN and the New York Times for smearing veterans who oppose these conflicts. Tulsi vowed to, as president, end the regime change war in Syria, for the US to stop backing terrorist groups like Al Qaeda, and to end the Saudi-led “draconian sanctions” imposed on Yemen.

I seriously had enough with the crocodile tears over civilian casualties. The West never expressed concern, let alone tears, for Syrian civilians loyal to Assad, the lawfully elected Government of Syria. As for Turkey attacking “the Kurds,” the YPG and the SDF are military organizations. Assad offered them a hand years ago, during the regime change operation [the so-called civil war], which they turned down; because the big, mighty US and A promised them statehood via the Zionist model. These ethnic separatists are cool among the left, because they’re communists or are in league with communists [PKK], you see…

Erdogan changed course during the dismemberment of Syria operation, when he saw that the US had plans for a Kurdish state, to prop it up militarily, and use it as a containment agent against other countries in the region, including Turkey [who borders it]. Erdogan’s shift in geopolitical goals and overall alignment makes total sense [especially after the failed US coup against him], even though he supported Daesh in order to get cheap oil and weaken Syria as a potential rival entity in the region. Let’s hope he’ll stick to the Astana agreement. Trump’s vow to punish Turkey with tough sanctions might be necessary in the end [to be enacted I mean], to force Erdogan not to hedge against Russia, the Syrian Government, and Iran. So I disagree with Tulsi and the rest of the Establishment narrative about “betraying the Kurds.” The only hope for Syrian reunification [with some form of autonomy for the Kurds] is for the US to get out of there, and let the regional actors, actors who actually have a stake in it, work it out.

It’s apparently okay to clear out that region of other ethnicities and religious groups in order to create a Kurdistan. But, with Erdogan’s offensive, the Kurds struck an accord with the Assad regime, the evil dictator who gasses his own people, remember? That’s how the Western media portrayed Assad. So, let’s draw a line and see what we have. Turkey, a NATO member, ally of the United States, is now painted by the Establishment as a dictatorship, waging a genocidal war against the Kurds [ABC used a Kentucky gun range video as proof of the “Slaughter of the Kurds”] – another faithful ally of the US, faithful ally who recently came to terms with the evil Assad Government, backed by ‘big, bad’ Russia under ‘fascist’ Putin, and by the Islamic terrorists Hezbollah [who protected Christians in Lebanon and Syria]. You people try to make sense of this. Let’s move on…

CNN cut Tulsi off when she was explaining her fitness for the Oval Office vis-a-vis the other candidates up on the stage, particularly Elizabeth Warren. 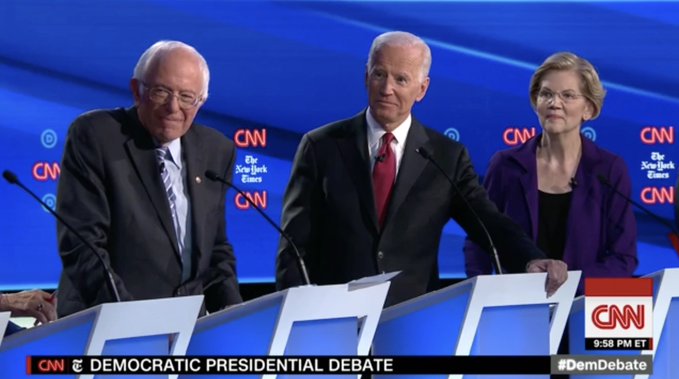 If we were to caption this picture, starting left to right: a) millionaire pseudo-socialist who only recently discovered the harsh, inconvenient realities of Israeli Apartheid rule over the Palestinians. b) Swamp dweller sleepy Joe. c) Pocahontas Liz Warren, who, like Sanders, only recently changed her PR on Israeli crimes, just because Netanyahu became really unpopular with liberals and totally aligned himself with Trump [or vice versa]. Before that, both Sanders and Warren, when referring to Israeli bombs and missiles destroying Palestinians homes and killing Palestinian civilians, toed the conventional line of “Israel has a right to defend itself.” And in Sanders’ case, he was awfully tough on the town hall heckler [“Shut up!], probably because he was a white male. At the Seattle rally in 2015, he didn’t have such a tough stance, in fact, none at all when the two black women from BLM, not only heckled him, but took complete hold over the microphone and caused the event to end prematurely. So you’ll excuse me if I don’t get all giddy over these two, even though they support Single Payer, which is a good policy.

Tulsi Gabbard emphasized the major change in view among Democrats on abortion, the pivot from moderate to progressive or hyper liberal. “I agree with Hillary Clinton on one thing, disagree with her on many others, but when she said abortion should be safe, legal, and rare, I think she’s correct.” The last adjective has been switched to frequent, and among the ultra liberal, deranged progressive groups, the pro-abortion stance has become a cultural fetish [the best way to pursue hypergamy], with these groups seeking state subsidies and rule changes to allow abortions irrespective of context. But I wish to end this article on a funny note, and Joe Biden’s performance here is just absolutely brilliant, brilliant. The real golden moment is with Biden’s last statement. Enjoy.

Absolutely! There are indeed innocent Kurds and she does no wrong in caring about their fate. But those innocent Kurds are misled by the Kurdish leadership which has acted so unfaithfully, always making deals with great powers with clear bad intentions in a bid to steal others’ land with the backing of whatever great power (US, Israel) is using them.

Gabbard is no dark horse. She’s being set up to look like one for another run sometime in the future – somewhere. She is on the CFR. She was military. She doesn’t care about having her own family – which means she does not care about yours (and yeah, I meant that). Childless women should not be in politics. Ever. (Yes, I meant that too). Childless men shouldn’t be either. Childless people have no stake in our future after they are dead. They should go live in Dubai at a luxury resort and leave their pro immigration policies, their obsession… Read more »

Paragraph #1, Sentence #3. You are absolutely correct in my view and I say this as a Gabbard supporter.

So Gabbard supports the impeachment of Trump. The question is why? If it’s for his July 25 phone conversation (which may have been normal but it revealed Zelensky’s and Trump’s lack of principles) with Volodymyr Zelensky then that’s a fail. If it’s for all the actual impeachment-worthy stuff Trump has done, then fine.

See David Swanson’s article titled “Trump’s Opponents Have Him Beat . . . When It Comes to Incompetence.”