Authored by Caitlin Johnstone via Medium.com:

In response to a statement during the Democratic primary debates by presidential candidate Andrew Yang that both Russia and the United States have engaged in election interference, liberal pundit Molly McKew tweeted, “I now retract any vaguely nice thing I ever said about Yang knowing technology things because he answered the question on Putin with moral equivalency and a Kremlin talking point.” 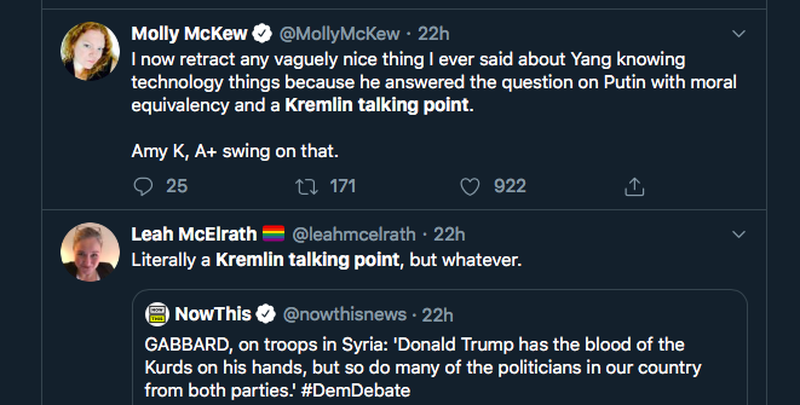 If you’re in the mood for some depressing amusement, just type the words “Kremlin talking point” without quotation marks into Twitter’s search engine and scroll through all the results which come up. Just keep on scrolling and observe how this label, “Kremlin talking point”, gets bleated by mainstream empire loyalists to dismiss subjects ranging from the rigging of Democratic primaries to criticism of US regime change wars to endless US warmongering to concerns about new cold war escalations to disliking John McCain to criticism of Nancy Pelosi. Any criticism of the status quo which cannot be labeled false or misleading gets labeled a “talking point” of Russia/Putin/the Kremlin by those who support and defend the status quo of US-centralized imperialist world hegemony.

Yang’s statement about US intervention in foreign elections is indisputably true, of course. Both alternative and mainstream media outlets have thoroughly documented the fact that the US government’s own data shows them to have interfered in scores of foreign elections, far more than any other nation on earth. This includes an interference in Russia’s elections in the nineties that was so brazen they made a Hollywood movie about it. Former CIA Director James Woolsey openly admitted on Fox News last year that the US still interferes in foreign elections to this very day.

These are not conspiracy theories. These are not even secrets. These are facts. But because they are inconvenient facts, they get labeled “Kremlin talking points” by those whose job it is to defend the status quo.

Hawaii Congresswoman Tulsi Gabbard was also branded with the accusation of voicing “Kremlin talking points” for remarks she made during last night’s debate. In her case those “talking points” consisted of the indisputable fact that the bloodshed in Syria can be blamed on US politicians from both parties, and the indisputable fact that the US has armed extremist militias in that nation with the goal of effecting regime change.

“It is a fact that the Russian talking point for years has been that the United States arms al-Qaeda in Syria. Tulsi Gabbard just said it on national television,” tweeted journalist Scott Stedman.

“How odd to listen to Tulsi Gabbard mouthing Syrian and Russian talking points on the Democratic debate stage…sorry but no one thinks US troops withdrawn by Trump were there as part of a ‘regime change war’ by the US,” tweeted Susan Glasser of CNN and The New Yorker.

This is from a video published by HTS (Al Qaeda in Syria) showing one of its fighters firing a US-supplied TOW missile in West Aleppo. The CIA-backed FSA was a weapons farm for Al Qaeda and ISIS. That’s not a “Russian talking point.” It’s a fact. https://t.co/g4Jw43fmBz https://t.co/atPy0Rt0jA pic.twitter.com/owNJQhQLpB 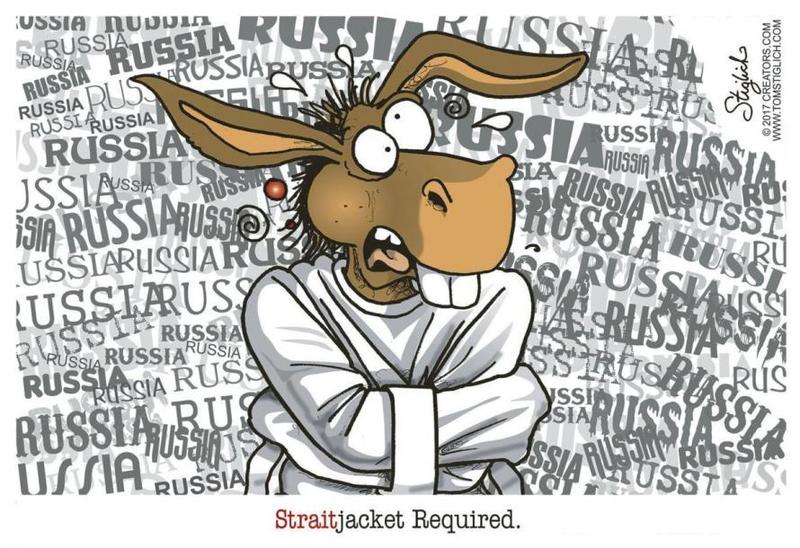 So let’s all get Russian then, baby. Let’s all fill our heads with objectively true Kremlin talking points and Cossack dance our way to a fact-based relationship with reality. Get as Russian as possible. Get aggressively Russian. Get offensively Russian. Get so Russian it hurts. Get so Russian it curls Louise Mensch’s hair. If they are going to start telling us that truth is Russian, then the only appropriate thing to say in response is dasvidaniya.

Thanks for reading! The best way to get around the internet censors and make sure you see the stuff I publish is to subscribe to the mailing list for my website, which will get you an email notification for everything I publish. My work is entirely reader-supported, so if you enjoyed this piece please consider sharing it around, liking me on Facebook, following my antics on Twitter, checking out my podcast on either Youtube, soundcloud, Apple podcasts or Spotify, following me on Steemit, throwing some money into my hat on Patreon or Paypal, purchasing some of my sweet merchandise, buying my new book Rogue Nation: Psychonautical Adventures With Caitlin Johnstone, or my previous book Woke: A Field Guide for Utopia Preppers. For more info on who I am, where I stand, and what I’m trying to do with this platform, click here. Everyone, racist platforms excluded, has my permission to republish or use any part of this work (or anything else I’ve written) in any way they like free of charge.

“Everyone, racist platforms excluded, has my permission to republish or use any part of this work (or anything else I’ve written) in any way they like free of charge.”
And who determines what a “racist platform” is? Johnstone or some third party?

It's not that hard
Reply to  Helga Weiss

Simple…..any group that has sent or intends to send envoys to, provides support or shows sympathy for Azov or any of Ukraine’s numerous other ‘patriotic’ battalions, political parties or other non-specifed assorted neo-nazi low lifes qualifies as a ‘racist platform’.

Helga Weiss
Reply to  It's not that hard

So what if these racist platforms happen to agree with this piece? Like, say, the Daily Stormer or what’s it called… Or Voice of Europe… or the AfD…

Can’t have your cake and eat it too, hon. Straddling broken fences ends in nursing broken bones.

Fair use is fair use, regardless of one’s views. Just my opinion.

Kremlin talking points? Hah. At this stage of the game I’d put more faith in them than all of the MSM’s talking points put together (which isn’t saying much, since they all repeat their favorite politicians’ mindless drivel in unison, or vice versa as the case may be.)

Hilarious, check out this kool-aid guzzler’s tweet above and the responses:
They run about 10 to 1 ‘it’s true though’ to ‘she’s a Russian asset’.

It is a fact that the Russian talking point for years has been that the United States arms al-Qaeda in Syria. Tulsi Gabbard just said it on national television.

J'Accuse!
Reply to  Drink the Kool-Aid

Right, and it was also a Russian talking point that ultra-nationalist neo-nazi groups drove Maidan to its conclusion, along with ol’ ‘F_k the EU’ Nuland and company of course, and drove the country into a foreseeable and inevitable civil war.

And son of a gun, THAT was true too.

Thanks Caitlin for the great writing… a must share article…
Just to add…Logic is Russian.
And just learned a new Russian word..

Obama gets a pass on everything because of his color.

And plain viciousness is…no, not Russian, but Western culture.