The Duran’s Alex Christoforou and Editor-in-Chief Alexander Mercouris discuss the rising tension between the United States and Iran, as the US has deployed an aircraft carrier group near the Iranian shores and sent B-52 bombers on patrol in the Persian Gulf.

A recent “Gulf of Tonkin” like sabotage that damaged four oil tankers off the coast of the UAE has been placed at the feet of “Iran or Iran-backed proxies,” courtesy of anonymous “US officials” as quoted by the fake news mainstream media.

Despite war rhetoric ramping up to dangerous levels, US President Trump has signaled that he may be looking for a diplomatic off ramp, by announcing that he will meet with Chinese President Xi Jinping and Russian President Vladimir Putin at next month’s G20 summit in Osaka, Japan.

Russian President Vladimir Putin and Chinese President Xi Jinping may act as a diplomatic bridge between Trump and Iranian leaders, which could offset John Bolton and Mike Pompeo’s drive for war.

As Michael Pompeo travels to Brussels to discuss the Iranian threat amid a flare-up in tensions that has brought the US to the brink of an armed conflict, the New York Times has published details from a confidential military plan presented to top national security officials that envisions sending as many as 120,000 troops to the Middle East should Iran attack American forces or start ramping up work on nuclear weapons (something it has promised to do if its European partners don’t meet their commitments under the Iran deal).

Though the revised plan – it had been modified to incorporate suggestions from John Bolton – doesn’t include plans for a land invasion, it does reflect “the influence of Mr. Bolton, one of the administration’s most virulent Iran hawks, whose push for confrontation with Tehran was ignored more than a decade ago by President George W Bush.”

It’s unclear whether Trump himself has seen, or been briefed on, the plan. Asked about it, Trump said “we’ll see what happens with Iran. If they do anything, it would be a very bad mistake.”

Here are a few key details from the plan according to more than a half-dozen senior administration officials who spoke with the NYT:

While a war with Iran still seems unlikely, if Iran starts stockpiling enriched uranium again as it threatened to do, it could give Bolton and his fellow neocons exactly the opening they need to successfully push for a military intervention.

First, Iran’s uranium stockpile is still being enriched only to 5 percent, not the 60-90 percent required for a nuclear weapons (which Iran still doesn’t want and has no use case for.) Secondly, what Trump “wants” is irrelevant. He’s obviously not even in the loop in what Bolton and the neocons are planning all around him. He has to read about the military plans in the New York Times, for Christ’s sakes! He wasn’t even briefed on them! Third, Trump is a buffoon in foreign policy. He knows nothing about Iran or anything else about the Middle East. He can… Read more »

You can call me AL
Reply to  Richard Steven Hack

Do not forget this – 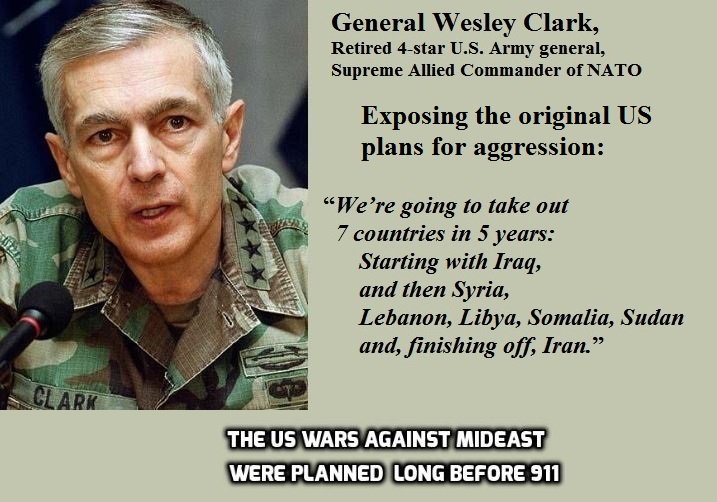 The US cannot start an attack on Hezbollah in Lebanon, who is a Syrian ally, while both Russia and Iran are in Syria. And that is not likely going to change before 2020.

It will be very unfortunate for American citizens to finance wars which could end like Vietnam.Hope the populations of the world stop this folly.God protects us all.

America, a nation originally invaded by Christians who were seeking a land where they could settle, worship God, according to what the Bible taught, and were fleeing the not so great whore, who was murdering any Christians who would not accept their religious hierarchy, and their pope, in place of Jesus Christ. Sadly, through religious skullduggery, the r.c. cult infiltrated and finally controlled what was Christianity, perverting it into ‘churchianity! America is now subjugated to the fatican, and, as a result, has been rejected by God. This does not mean there are not many sincere Christians living there, but, unfortunately,… Read more »

Which God, as you should know there are many…

Oh, and one more point: Putin and China won’t threaten WWIII over Lebanon. So if the neocons and Israel get their war in Lebanon, they can extend that war into Syria and eventually Iran. Once a war starts, it develops on its own. So unless Russia and China are prepared to threaten WWIII – or at least direct military confrontation with the US over Iran – prior to starting the Lebanon war, there’s nothing that will stop that war from starting. Congress won’t want to be on the side of being “against Israel’s security” and the Pentagon, still smarting from… Read more »

New slogan for Trump 2020: MASA – MAKE AMERICA SANE AGAIN By preventing futile wars; ending endless false accusations against other countries whose oil and mineral resources the US wants to steal; by firing Bolton and Pompeo; by accepting that the US has to invest way more money into education to make college accessible to all independent of money to increase the talent pool; by building infrastructure and develop new products for export; by instituting free healthcare for all so a healthy workforce can be productive. These are just the most obvious items of necessity in America. Once Trump starts… Read more »