Authored by Mike Shedlock via MishTalk:

The EU thinks there is an 80% chance of no deal. Yet, less than 50% of the UK thinks the UK will leave at all. 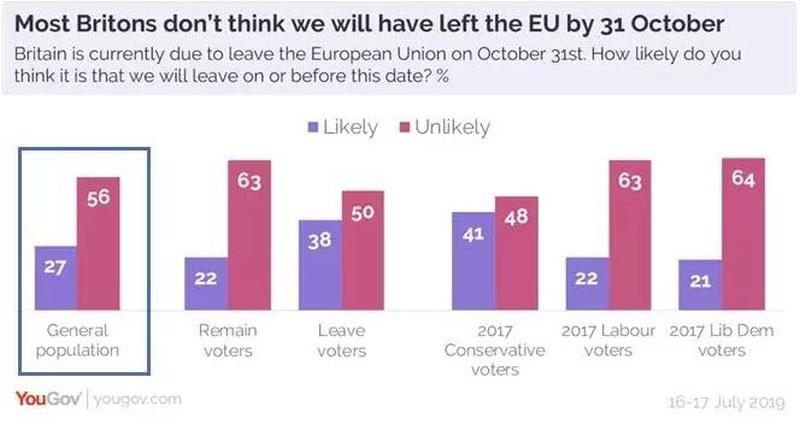 Boris Johnson’s pitch throughout the Conservative leadership election has been that October 31st is a hard deadline for Brexit. Having already seen two deadlines come and go, the former Foreign Secretary declared delivering on this third date will be “do or die”.

The public doesn’t buy it, however.

New YouGov Tracker Data finds that 56% think it’s unlikely that the UK will have left the EU by the end of October. This is twice the number (27%) who think it’s likely.

EU Believes 80% Chance of No Deal

Meanwhile, the EU Believes there’s an 80% Chance of No Deal.

Brussels fears his campaign rhetoric and pledges on the backstop and leaving on October 31 “do or die” have made a compromise solution near impossible.

They are now bracing for ill-tempered talks with the new PM over the summer – and having to “shoot down” ideas already tested and discarded by Mrs May.

Member States now expect an EU Council summit on October 17 to become all about crisis planning for a crash out at the end of the month.

Officials also dismissed Mr Johnson’s bid to seek a tariff and quota free “standstill” trading arrangement with the EU in the event on No Deal.

Instead, they said the new PM would have to negotiate similar market access terms to those contained in the backstop, only on a “worse basis”.

If the EU is foolish enough to insist on a worse basis, then they will not get any Brexit Exit Fee payment from Johnson.

It’s difficult to know if the EU is just posturing or if they really intend to make themselves more miserable than the UK.

The notion the UK will be hurt more by Brexit is nonsensical. But if the EU really believes that, they may go for it.

All we know now is what the sides say they will do. As the clock ticks down, what will the EU and Johnson really do?

I happen to believe Johnson and I am now of the opinion that 80% is about right.

Remainers, Labour, and Liberal Democrats are completely oblivious to reality.

Perhaps they think Boris will seek an extension. Other than a couple weeks to tie up loose ends, forget about it.

Nor can Parliament stop Brexit.

All Parliament can do, but it better act immediately, is force an election in time to matter, then win that vote.

That’s quite the parlay and it might be impossible after July 25. It will be impossible, even under the most favorable assumptions after September 10.

Let’s hope that Boris Johnson will be able to lead the UK out of the EU. That will be the best he can do.

Does the writer know that the british regime goes into recess tomorrow, 25th July for two months, after which it re-opens for a few days prior to the ‘party conference season’ – whereupon it closes again until early october? – in what way is britain going to leave the eu? The people have been betrayed and democracy in the country is non-existent

Hope they leave very soon. Who needs idiots for an ally unable to make the pimpliest of decisions. Leave and NEVER rejoin.