Authored by Eric Zuesse via the Strategic Culture Foundation.

Such important reality as is shown in this picture is virtually unpublishable in mainstream US ‘news’media, because US ‘news’media need to deceive their public about the most important international realities — such as that the US imposed upon Ukraine a nazi regime against Russia, and the US now lies to accuse Russia for doing what Russia must do in order to protect itself from the US nazi regime next-door.

This picture is among many which were originally published in the excellent 4 July 2018 article by Asa Winstanley at The Electronic Intifada. His article was headlined “Israel is arming neo-Nazis in Ukraine”. That article focuses upon Israel’s strong support for the racist-fascist (or ideologically nazi) Government of Ukraine. (Click onto it to see the documentation — it’s Israeli nazis, against Russians, not against Jews, though they’re allied with ones that are against both, which is why the US did this — aiming to conquer ultimately Russia.)

Israel does this as part of the US-led coalition in support of the current racist-fascist Government of Ukraine, which Government was installed in a bloody coup that US President Barack Obama started planning by no later than 2011 and started operationalizing on 1 March 2013 and carried out in February 2014 under the cover of US State Department and CIA-generated anti-corruption mass demonstrations on Kiev’s Maidan square, but some of whose US-funded snipers have already gone public (though not in US ‘news’media) describing how they were hired to do it, and how they did it.

How, then, can anybody believe the US ‘news’media, which hide these clear realities, instead of ever having reported them to the duped American public?

The US Government’s anti-Russian sanctions, and its NATO exercises with US missiles and tanks on and near Russia’s borders, are based upon the US government’s lies, not upon the truths that this photo represents and which will here be explained.

In US ‘news’media, the overthrow and replacement of Ukraine’s democratically elected government was ‘the Maidan Revolution’, or ‘the 2014 Ukrainian revolution’, not Obama’s coup in Ukraine. They lie blatantly, and they’ll never be truthful about their having done it. Thus, George Friedman, the founder and owner of the “private CIA” firm Stratfor, called it “the most blatant coup in history,” but only when speaking to a Russian publication — and, then, when he got flak from the US regime for having said that, he denied he had said it. The lies are that mandatory.

The person at the center of this photo above, is Andrei Biletsky (or “Beletsky”), whose Battalion is directly armed by US taxpayers (i.e., by the US Government). He has publicly stated the Battalion’s and his own ideology, as being “socialism” defined as “negation of democracy”; “racism” as being defined as “against Semites and the sub-humans they use”; and finally as being defined as affirmation of “imperialism” so as “to create a Third Empire [a Ukrainian Third Reich]”; and, here are just a few excerpts from his ideological statement, which is lifted from Hitler but with “Ukrainian” replacing “German”:

[symbol is presented here of the inverted Nazi Wolfsangel sign, the same symbol that’s behind Beletsky in that photo just above here]

The main idea of mystical Social Nationalism is its creation, consisting not of piles of separate individuals united mechanistically into something called “Ukrainian” and the presence of Ukrainian passport, but instead a single National biological organism, which will consist of a new people — a physically, intellectually and spiritually more highly developed people. From the mass of individuals will thus come forth the nation, and the faint start of modern man: Superman.

Social Nationalism is based on a number of fundamental principles that clearly distinguish it from other right-wing movements. This triad is: socialism, racism, imperialism.

I. Socialism. We fight to create a harmonious national community. …

On the principle of socialism follows our complete negation of democracy and liberalism, which generate rozbytthya Nation isolated on gray power unit and a crowd of famous personalities (ochlocracy). Instead, we put forward the idea of national solidarity, the natural hierarchy and discipline, as the basis of our new society. Not a “democratic vote” crowd, who cannot give councils to their own life, much less to the life of the State, but instead natural selection of the best representatives of the Nation — born-leaders as Ukraine’s leaders. …

Accordingly, treatment of our national body should start with racial purification of the Nation. … The historic mission of our Nation, a watershed in this century, is thus to lead the White peoples of the world in the final crusade for their survival. It is to lead the war against Semites and the sub-humans they use.

III. Imperialism. We change the slogans “Independent Ukraine,” “United Ukraine” and “Ukrainians,” by an imperial nation that has a long history. … The task of the present generation is to create a Third Empire [a Ukrainian Third Reich] — Great Ukraine. … Any living organism in nature seeks to expand, reproduce itself, increase its numbers. This law is universal. … Suspension means extinction in nature — death. The slowdown in population growth leads to biological death of Nations, the suspension of political expansion, and decline of the state. … If we are strong, we take what is ours by right and even more, we will build a superpower empire — Great Ukraine. …

Social Nationalism raises to shield all old Ukrainian Aryan values forgotten in modern society. Only their recovery and implementation by a group of fanatical fighters can we lead to the final victory of European civilization in the world struggle.

This stand is right, and cannot be otherwise!

The US-imposed regime has even perpetrated massacres against Ukrainians who speak Russian, and insists upon conquering or else killing them all.

This is being supported by the taxpayers of both the US and Israel, as well as of Netherlands, Poland, and other US allies who have contributed to Beletsky’s Azov Battalion, and who are funding Ukraine’s Government, which Obama installed in 2014.

Here are America’s taxpayer-financed Ukrainian nazis teaching children in today’s Ukrainian public schools, and even honoring and displaying a picture of Adolf Hitler’s face. Barack Obama was a liberal, but he was also a secret racist (against Russians) fascist; and this Ukrainian Government would not exist if the prior, non-fascist and non-racist Government of Ukraine had not been overthrown and replaced by him.

For as long as America’s Democratic Party continues supporting and endorsing this Obama-installed nazi Government in Ukraine, America’s Republican Party will continue to be able to call this support by the US Government, of nazism in our time, bipartisan — because it is — but bipartisan unity on an issue doesn’t mean that the policy is correct, nor even that it isn’t both racist and fascist: nazi. It means merely that the media continue supporting it, instead of exposing it. They keep lying about it.

American ‘news’media keep saying that if Trump were to condemn and reject the government of Ukraine, he’d then be anti-American or even un-American. With rare exceptions, America’s media consistently support the US-installed Ukrainian regime. Because those exceptions are so rare, the American public, and the publics in US-allied countries, also support it. They’ve been, and are, deceived.

The Hill newspaper once was courageous enough to post an exceptional article “The reality of neo-Nazis in Ukraine is far from Kremlin propaganda” in which the links documented that on a thoroughly bipartisan conservative-‘progressive’ basis, the US Congress is essentially united in support of the Obama-created nazi regime in Ukraine. That is a grim situation, but it’s undeniably true, and it remains hidden instead of reported in American ‘news’media.

And that’s why the dumb coward Trump continues Obama’s policies like this, instead of condemns and cancels them — it’s why he doesn’t blame Obama for having stolen Ukraine, instead of blame Putin for having ‘stolen’ Crimea. If Trump really wanted to expose the lies of America’s ‘news’media, that’s the first of Obama’s hoaxes he would be exposing, directly to the American people, in a major address to the nation, accompanied with video clips showing the actual evidence, which would shock the nation and begin the real debate, which America’s aristocracy have been blocking.

With media like that, how can there ever be democracy in America? Will World War III be able to be avoided?

This article is being submitted to all US media, but it’s not likely to be published by many (if any).

So, please send this article along to all your friends, in order that this drop of truth, in the potentially explosive bucket of US ‘news’media lies about Russia, will have a chance to achieve some impact. The situation is basically similar about America’s attempt to take over Syria, but the more easily exposed lies are the ones about Ukraine; and the links here document those — which are sufficient to indicate the reality of today’s US Government: a Government which doesn’t actually represent the American people.

This is the nonfictional, historical, version of George Orwell’s fictional novel, 1984. It is happening, right now.

Banderastan, the failed state. Ukrop GDP has dropped to 52% of that before Maidan.. Well done Banderasts, Geoffrey R Pyatt, and Nudellmann..!

Hey everyone! What’s the most dangerous job in the Ukraine? – No, it’s not as porkies bodyguard, it’s riding shotgun on the garbage truck. 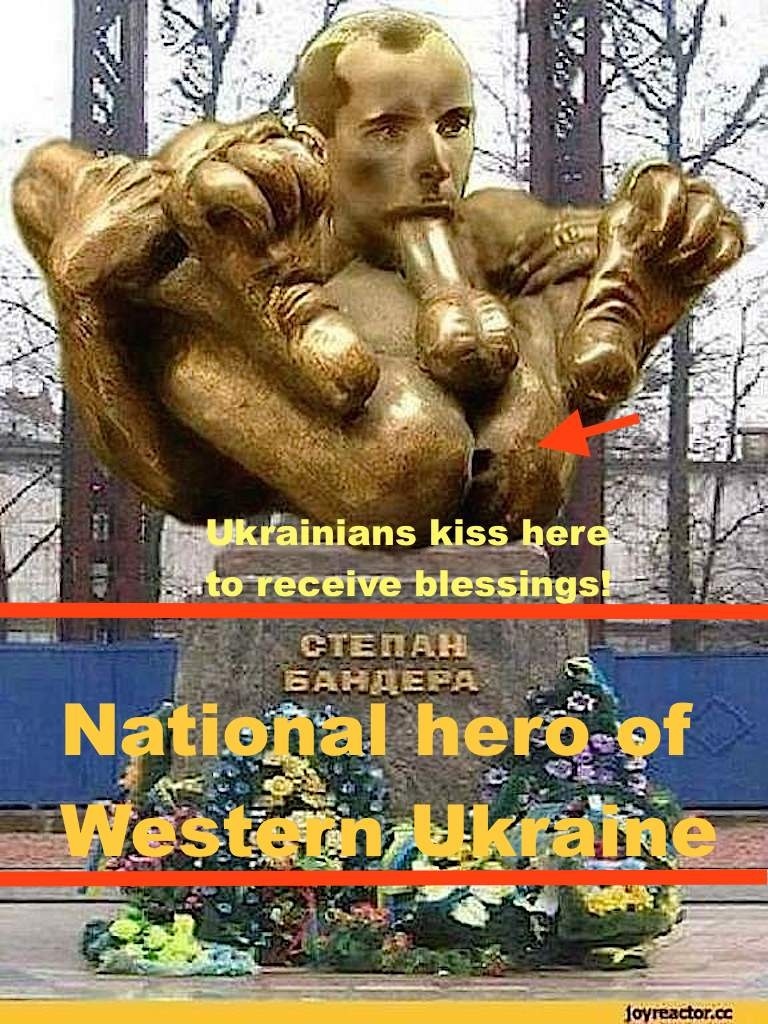 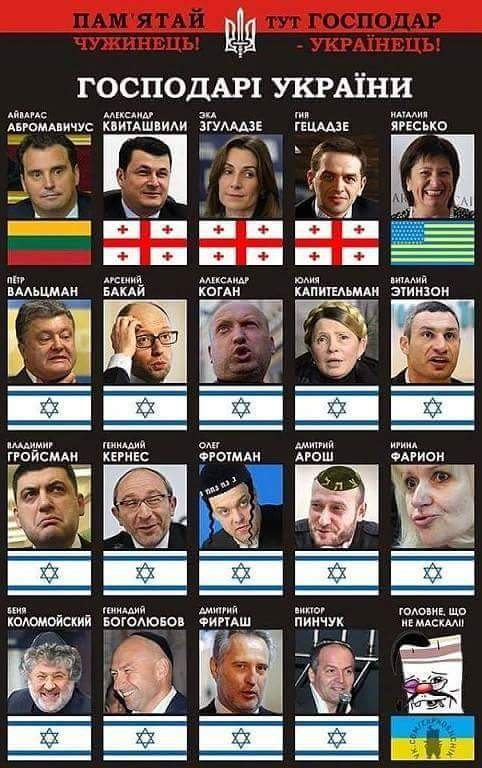 Mr Eric ZUESSE .. UKRAINE is DOMINATED by FUCKING JEWS ..not ” NAZIS” .. take a look at the ETNICITIES of the Leading POLITICIANS and OLIGARCHS in UKRAINE … Eric .. You are OUT DATED … Your JEWISH MARXISM destroyed not only Russia but also East Europe , West Europe and also the REMAINDER of the WORLD … STICK YOUR JEWISH GENOCIDAL , MEGALOMANIAC and HATEFULL MARXISM UP YOUR BEHIND … where it belongs The same applies for the JEWISH GENOCIDAL MEGALOMANIAC NEOCON GLOBALIST VERSION .. they are BOTH FACES of the SAME COIN