Thirty-one years ago, on March 11, 1990, the Supreme Council of the Republic of Lithuania declared independence. As inevitable as it seems today, many countries were very far from supporting this outcome.

Thus, Moscow said the action was meaningless, and the administration of George H W Bush worried it could trigger the collapse of what it saw as a new international order made possible with Mikhail Gorbachev at the helm of the USSR.

Once something has already happened- it was meant to happen. 31 years ago Lithuania started its own way in politics and economy. It has been and remained an extremely hard way to gain independence not only „in words but also in deeds”. And and this became the most difficult thing.

Lithuanian authorities understood that such a small country could not exist in the politics of uncertainty and chose to become a member of NATO and the EU. It seemed as if Lithuania had got its voice in international arena. The hidden side of this membership was the necessity to obey the rules of these organizations as it was during the times of the Soviet Union.

One of the most illustrative example is the forced need to increase defence at the request of NATO, as well as restrictions on the export of goods and services imposed by the EU.

Thus, Lithuania could not decline any initiatives of these two organizations even in case they are destroying for its economy. This means Lithuania is not free to choose its politics and deeply depends on more powerful and influential countries and organizations.

It is known that Lithuania has already increased its defence expenditures but it is not all. The Alliance insists on the continuation of the process.

Thus, during the conversation between NATO Secretary General Jens Stoltenberg and Rose Gottemoeller, Payne Distinguished Lecturer at the Center for International Security and Cooperation, Stanford University,on March 9,  he said that “I think we have to admit that it’s always hard to allocate sufficient resources, funding, for defence, because I’ve been a politician myself and I know that to priorities between healthcare, education, defence is never easy. But my message to Allies has been that – and is – that when we reduced defence spending, when tensions went down after the end of the Cold War in the 1990s and also the beginning of the 2000s, then we need to be able to increase defence spending when tensions are going up, as they do now. And the good news is that all Allies not only agree, but actually deliver on that pledge we made together in 2014 at the Wales summit when President Biden was part of the Obama-Biden administration. The United States strongly conveyed a message to European Allies and Canada that we need fairer burden-sharing in this Alliance.

Second, he admitted that “yes, it is difficult, but we cannot stop investing because of the pandemic. And that’s exactly also what Allies do – they plan to continue to increase defence investments.”

There is no doubt Lithuania is to pay more on defence, is obliged to put the interests of the organization above national. So, the desired independent politics has remained only a dream of those who proclaimed independence of Lithuania.

Lithuania, Estonia and Latvia: Please recall your actions and attitude during the WW2 and remember the consequences, can you?
The situation as far as your attitude and actions against ethnic Russians is extremely similar today…just as a reminder. Your fake friends from north american terrorist organization will drop you like hot potato when the push comes to shove.

In 2021 I have just received my 3rd paycheck which said that $36285 that i have made in just one month by working online over my laptop. This job is amazing and its regular earnings are much better than my regular office job. Join this job now and start making money online easily by just using this link……..http://www.works79.com

…Adomas…don’t cry…Lithuania is living the freedom dream with all it’s dificulties wille your master continues to impose the usual brutality of the russian dictatorships to the poor Russian people!…I think that the Lithuanians are a 1.000.000 times better!…and they don’t want to have anithing to do with the sordid russian state!…buy a mirror man!… 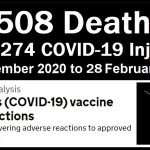