There is no doubt that if Hillary Clinton had won the US election in 2016, she would have confronted Russia in Syria. Trump didn’t.  And simply put, Russiagate provided the means to exert pressure on Russia that Clinton would have applied, had she won office.

Consider that US sanctions versus Russia have never been more severe. By the US Treasury’s own account and by major media reports, the new sanctions may be confirmed. And on June 13th, the Russian president talked publicly about increased tensions with the United States, saying that the situation has degraded, and is degrading, worse than at any time since the Cold War.

So, considering such dismal Russo-US relations, why do US Neoliberals still push the Russiagate agenda? One reason is that Russia has consistently opposed aggressive US foreign policy since 2011, while US Democratic party Statists push for war in the Middle East and Asia, one example being their opposition to Trump’s proposal to remove US troops from Syria.

That the US major media and leadership of the Democratic party opposed any plan to remove US troops from Syria is undeniable. And while the stated number of US troops so-stationed appears to be few, intelligence sources show that the US presence in Syria is far greater than publicly proclaimed. Besides those mis-stated numbers, we have a media-endorsed false public narrative that the US is continuing to target ISIS positions, when it is not. In fact, the US has protected terrorists in Syria and is protecting jihadists and jihadi territory there.

The US in Syria

According to the map shown (courtesy: Southfront) the US maintains forces in Manbij to defend Takfiri areas around Jarablus, to the terrorist stronghold of Idlib. Recent reports state that the US has failed to engage any terrorist forces in the region, and that their only commitment is to defend YPG (Kurdish forces) and SDF rebels. 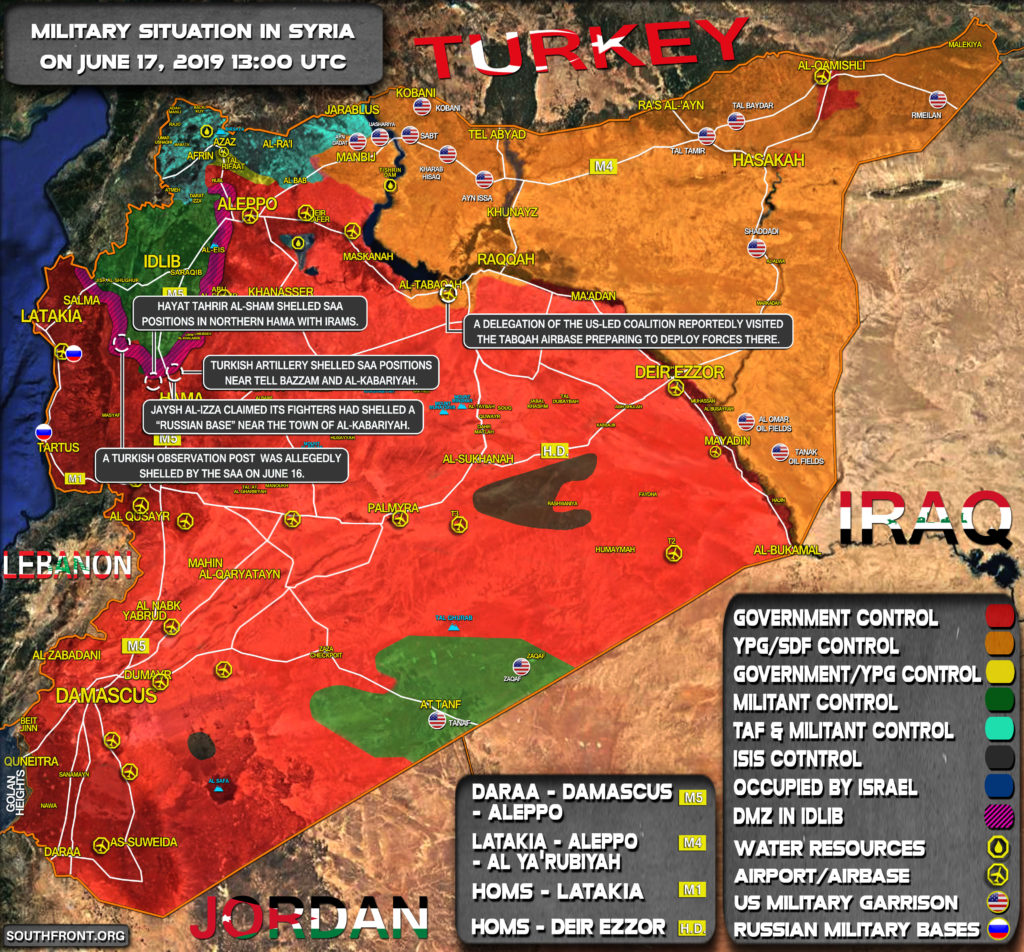 For the US to withdraw here will cause great consternation by Israel (allies of the Kurds) and the usual Russiagate crew. That’s because any vacuum to fill around Manbij will certainly be filled by Russia — not Turkey — and therefore will be seen as a Trump concession to Russia.

In al-Tanf the Lions of the East Army; the Forces of Martyr Ahmad al-Abdo; the Army of Free Tribes; Revolutionary Commando Army and Al-Qaratayn Martyrs Brigade all operate freely.  These terrorist militias are protected by US air forces, being remnants of the terror forces originally employed by the CIA in Timber Sycamore. The US presence here is seen as a counter to the Russian-SAA and Iran, and if the US were to abandon al-Tanf that would once again invoke the wrath of the Russiagate crew.

While anti-Russia war hawks Mattis, McMaster, and Tillerson were all fired partly due to their positions on “Russian collusion”, their posts have been filled by even more aggressive and fervent war hawks, namely Bolton, Pompeo and Shanahan. Those hawks do far more than obsess over Russiagate, they seek actual means for real confrontation with Russia on the geopolitical chess board.

Thus, the Russiagate controversy is not just a media diversion hosted by Democrats; Russiagate provides cover for a new Trump regime policy aimed to embroil the Russian Federation in ever deepening geo-political chaos and crisis.

One. Bibi’s failure to form a government.  This somewhat reflects Trump’s own issue at home in the United States, where Trump is constantly hounded by Russiagate and by threats of impeachment.  One can easily sense Trump’s lack of patience with Democrats on the Russiagate issue, and his war hawk cabinet has given Trump an unique opportunity to shift the focus now.

Two. Syria’s Idlib heats up. Recently ISIS fighters and their affiliates have struck out from Idlib in various offensives, in some cases surprising the SAA, calling in air stikes. It is unclear at this time how ISIS is now being directed, and how and where its arms are being supplied.  But nonetheless a serious escalation of force has occurred from encircled Idlib. What is the motivation for this escalation? All we know is that the Idlib escalation is occurring in tandem with the Iran Tanker attack.

Three. Iran tanker attack. Despite all the theories about this bizarre but dramatic incident in which no lives were lost, the tanker attack has provided the Trump regime with a unique new opportunity to focus on a brand new war, a war with Iran.

We thus paint a mosaic of shifting scenes pertaining to international issues which overshadow and put paid to Russiagate, to obstruction, and to impeachment. Thus providing a new context for Russiagate itself.

So, is Russiagate dead? We don’t know yet, but on the brink of a New War — whether enforced on a false pretext or not — there is little time to consider.  And another new context is born for Russiagate!

[Side note: Another marvel of the current situation is Wall Street. Despite threats of war and peril to oil supply, Wall Street hardly moves; recall that in the Panic of 2008-2009 the 2008 election was greatly impacted by that financial failure!]

Steve Brown is the author of “Iraq: the Road to War” (Sourcewatch) editor of “Bush Administration War Crimes in Iraq” (Sourcewatch) “Trump’s Limited Hangout” and “Federal Reserve: Out-sourcing the Monetary System to the Money Trust Oligarchs Since 1913”; Steve is an antiwar activist and historian of the monetary system and editor of Novus Confidential investigative reports.

One thing I would point out to the author, I disagree with your statement that this gives Trump “a unique new opportunity to focus on a brand new war”. No part of this is unique, it is the same modus operandi they always use, have always used.