Among the most popular drama series this 2020 Ramadan season, has been “Hares Al Quds”, which is translated in English as “The Guardian of Jerusalem”.  Syrian director Basil Al Khatib has used the 30 episode format to narrate the life of Archbishop Hilarion Capucci, who was born George Capucci in 1922 in Aleppo, Syria. He was ordained a Greek Melkite priest in 1947, and he was elected archbishop of Caesarea in 1965.

The Syrian cast includes Rashid Assaf who plays the older Capucci, Amal Arafa, who plays a woman from Aleppo, Sabah al-Jazairi, who plays his caretaker, and the legendary actress Samia al-Jazairi, as the mother of Capucci.

The opening scene of the 30 episodes takes us to Capucci’s home in Rome, where a phone call in late December 2016 informs the exiled Archbishop that Aleppo, his hometown, has been liberated by the terrorists who had kept the civilians under occupation for years.  The story of his life thus begins with his hometown celebrating victory.

He lived in Jerusalem as a seminary student, and the city known as “Al Quds” in Arabic became his second-home for decades until he was deported in 1978, after devoting his time and effort to Palestinian rights.  The Archbishop was an Arab, who was against the political ideology known as Zionism, and he witnessed the oppression and suffering of the stateless Palestinians who were denied property rights and human rights by the Israeli occupation forces.

In 1974, while serving as Patriarchal Vicar Emeritus of Jerusalem, he was arrested by Israeli occupation forces for smuggling weapons in a car which had diplomatic license plates. He was convicted by an Israeli military court of using his diplomatic status to smuggle arms to the Palestine Liberation Army and sentenced to 12 years in prison.  During one scene in the Israeli military courtroom, the prosecutor accuses Capucci of being a criminal.  Capucci vigorously denies the accusation and says, “I am not a criminal.  I am defending my rights.”  While in prison for 4 years, he wrote on his cell wall, “In patience there is victory.”

Capucci adhered to a political ideology of resistance to the occupation of Palestine.  He was against Zionism, which is a political ideology that defends the occupation of Palestine and denies the rights of the Palestinian people. He supported the struggle for the rights of the Palestinian people.  This resistance stance was shared by Syria, the PLO, and Iran.

In 1979, Capucci visited Ayatollah Khomeini in Iran, who had dedicated the last Friday of Ramadan each year as “Quds Day”, which would serve to unite Muslims worldwide in support of Palestinian rights.  That same year Capucci played a key role in the Iran hostage crisis and in early May 1980 he obtained the release of the bodies of the American soldiers who had died there. Pope John Paul II invited Capucci to live in Rome.

In 2000,  Capucci led a delegation of clerics and intellectuals to Iraq in a show of solidarity against UN sanctions, and in 2003 he voiced his opposition to the US attack on Iraq.

In 2009, Capucci participated in the Gaza aid ship, which ended by the Israeli forces seizing the ship as it attempted to break the imposed blockade, and Capucci was taken to the Golan Heights where he crossed into Syria.

In June of 2009, Capucci gave a lecture in the US, which included the following words and messages. “I am the archbishop of Jerusalem. I am nothing but a shepherd,” Capucci said. If the shepherd sees a wolf approaching his flock, he defends his flock. “The Palestinian people are my flock,” he said. ”You see, this ring on my finger shows my engagement to Palestine. All the children of Palestine are my children and extended family…” The archbishop is also a father, Capucci continued, and the sign of fatherhood is compassion. A father can’t watch his children suffer and sit idle with his hands tied. He must stand up to defend his children. “The people of Palestine are my children,” the archbishop said. “They have been oppressed, they have suffered a great injustice, their rights have been denied, their dignity trampled upon, their daily companion is nothing but suffering.”

In 2010, Capucci participated in the Free Gaza Movement’s aid flotilla to the Gaza Strip. He was a passenger on MV Mavi Marmara, which was seized by the Israeli Navy, who killed nine humanitarian activists onboard while injuring many others.  Capucci gave a speech on arriving in Istanbul with the survivors.

In the TV series, we see the Syrian Ambassador to Argentina played by a well-loved Syrian-Palestinian actor, Ahmed Rafea.  His son, Mohamed Rafea, was born and raised in Damascus, Syria, and became an actor as well, having acted in one of the legendary Ramadan series, “Bab al Hara”.  When the US-NATO attack on Syria began in 2011, he had been a high-profile activist in defense of law and order, and rejection of terrorism. Even though he was Palestinian, Syria was his second-home. The armed terrorists of the US-sponsored “Free Syrian Army”, otherwise known as “Senator John McCain’s Army”, kidnapped, tortured, and murdered the young actor on November 4, 2012.

I asked Dr. Declan Hayes to tell me about his friend, and he said, “The words of St. Paul, in Timothy 4:7-8 that “I have fought the good fight, I have finished the race, I have kept the faith,” so very aptly apply to Archbishop Capucci and his Syrian, Lebanese and Palestinian colleagues.  I met Archbishop Capucci on numerous occasions in the Palestinian Embassy in Rome during the ongoing Syrian crisis, where he was a tireless fundraiser and advocate for the Syrian people, against whom the West has committed the most dreadful crimes through their various proxies.  Although it was a privilege to be friends with him and the staff of the Embassy, and with the Lebanese nuns who helped, as well as with the leaders of the Latin and Greek Church in Palestine, their betrayal and abandonment by the West is the most shameful scandal of our era, if not of any era.  Syria and the Greek Catholic Church can be very proud of Capucci and those who worked with him.  He was a son of Aleppo who stayed faithful to the very end. May God give him the reward he so richly deserves.” 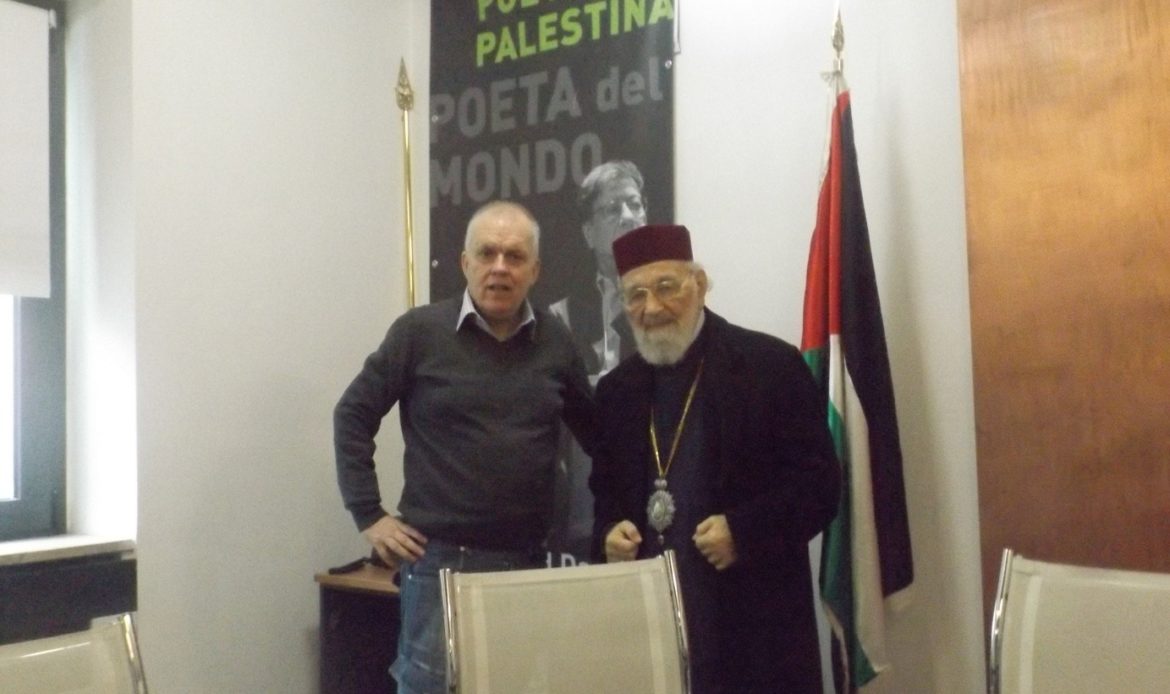 On , 1 January 2017 the Vatican announced that, the Patriarchal Vicar Emeritus of Jerusalem, Capucci had died in Rome, aged 94.

Among the hundreds of expressions of mourning at his passing, Palestinian President Mahmoud Abbas described him as a great “freedom fighter”.

Steven Sahiounie is an award-winning journalist and has dedicated this article to the memory of the Archbishop of Resistance, Hilarion Capucci.